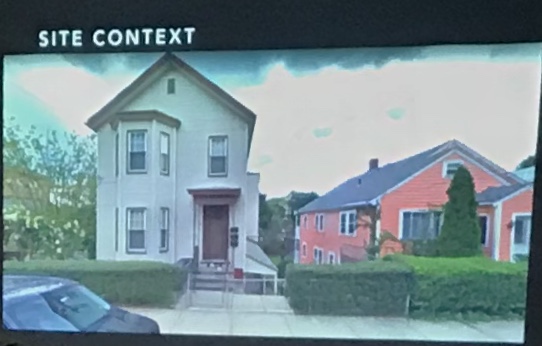 ^ 119 Leyden Street : a beautiful, 1880s gem, to be torn down, according to a proposal that should never be allowed.

Last night I attended a monthly meting of the Orient Heights Civic Association — my first since January. What I saw surprised and concerned me.

The 75 or more locals who saw and listened to two development proposals expressed the usual — and correct — objections to a development process in which the City’s Zoning Board of Appeals approves proposals that aggressively alter, rather than support, the character of the Orient Heights neighborhood. These normal objections should be honored by the Zoning Board, but they are not. I have written before this about the duty given by State law to Zoning Boards of Appeal : that any variance they may give from an area’s zoning designation must enhance and carry out the purposes of that designation. In Boston these past several years, the opposite is the rule, and people are right to dislike that.

Yet what I saw at the Orient Heights meeting went beyond the usual Zoning variance case. In both the proposals offered, 119 Leyden Street and 192 Gladstone Street, two perfectly good, well maintained homes, one an 1880s gem, are to be torn down and replaced with, respectively, a nine unit and six unit condo building. I headed this column with the photo of that 1880s gem to illustrate the audacity of what was being asked. By what whim has development in Boston now reached a point where dwellings that enhance the character of a neighborhood are to be torn down and done away with ?

To put it another way : Are we now at the point where houses — normal houses that establish a neighborhood’s personality — are to be eliminated entirely, purchased by a developer who can afford to pay more than any ordinary, resident home buyer because he or she can turn the parcel into 6 to 9 units each selling for almost the price of a single home ? Well, yes, we ARE at that point, if developers know that the Zoning Board of Appeals will grant them the variances they need to make such an outcome work. And if we are at that point, then neighborhoods like Orient Heights, where normal homes sit on lots large enough for developers to build 6 to 9 condominium units, have no defense. Might as well cash out and say goodbye to a neighborhood that has worked well for a century.

Fortunately for the rest of East Boston, the same strategy cant work. Homes in Jeffries Point and most of Eagle Hill sit on much smaller lots. There’s no room to do what the 119 Leyden and 192 Gladstone developer is trying. Not that downtown East Boston hasn’t its own weaknesses against the moves of grand-design developers; but at least they aren’t naked to this one.

It’s also an easy tactic to counter. The tear-down proposal can’t work if the City won’t approve the necessary variances. That’s all it takes to safeguard the character of Orient Heights, as the State’s zoning laws were adopted to do. Why won’t the City administration put a stop to it ?