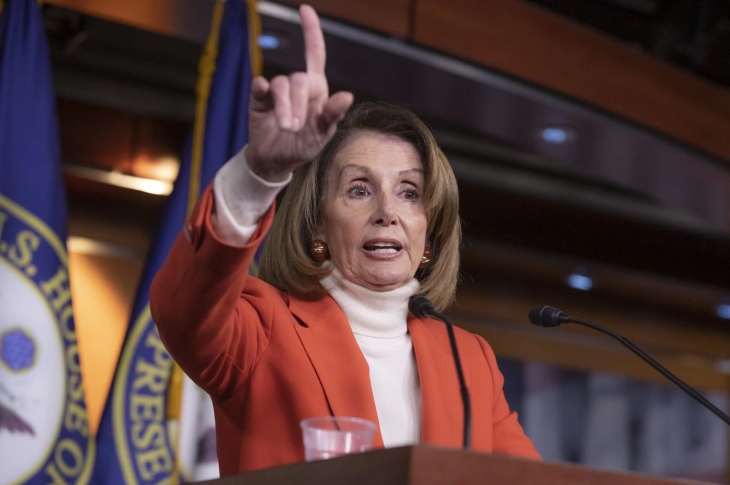 The next Congress must elect Nancy Pelosi its Speaker. There is no other rational choice, no other Congress-person who can lead the House through the challenges that confront it.

Some say that who will be the next Speaker is a matter only of the Democratic party : what direction should it take. I reject that view. The nation has only one Congress; every voter has an interest in who leads it. Right now, far more voters than just Democratic ones are looking to the 116th Congress to save the nation, basically. To accomplish this mission only the best leader will suffice. Nancy Pelosi is that leader.

She showed just how potent a legislator she is when, during her 2008 to 2010 term as Speaker, she oversaw passage of the ACA Health Care law. She has raised insane amounts of money in support of her party’s candidates. If Democrats now control the House, and thus have power to stop; the onslaught of radical Trump policies, they control in large part because Democratic House candidates had tons of money to spend on voter outreach.

Fighting Mr. Trump will never be easy. He knows no bounds, feels no restraints, from doing whatever he can handle at whoever stands in his way. But for the Federal Courts, he would already have wreaked sustained damage upon our democratic (small “D”) norms. In the field, he is as ruthless as Tamerlane, as reckless as Sardanapalus, as loud as  Mussolini, as ignorant as a Cave Troll. Other than with judgeship nominations, his entire presence is a negative — a smelly, vulgar, prurient interest negative. He is corrupt without shame, a toady to dictators, vengeful and petty, lazy, a liar and a saboteur. And for all of these, he is loved beyond measure by about 25 percent of us and tolerated by about another 15 percent. 40 percent is a damn good base whence to start a national election campaign.

Defeating Trump in 2020 will require more than only a Speaker Pelosi. Candidates matter. Who eventually becomes the Democratic nominee for president needs be as disciplined as a Marine, as discreet as a body man, as tough as cement and as visionary as Teddy Roosevelt. Pelosi measures up to all these criteria. She grew up in street politics when street was THE political arena; she has tied herself to every major political force. She commands her caucus no matter which of them objects. She knows what the American people want most. She can prioritize. She knows how to NOT take a bait; how NOT to lead down a wrong path.

The temptation is great to bring bills of impeachment of Mr. Trump; great to investigate him and his administration 24-7 and all the year long. The winds blow almost as strong, within the Democratic caucus, for bringing back actual socialism: the government owning businesses and running them too. The temptation roils nearly as hot for espousing radical plans for environmental reform that would include an almost total neutralization of fossil fuel industries. I’ve read these plans. They are enormously complex, wildly upending to millions of lives. They require new taxes and new bureaucracies enforcing novel rules of environmental practice. They require much debate and emendation. The next Congress — of which the Democrats will control only one part — is NOT the arena for forwarding them.

In my view, the next House must focus on defending basic rights and accepted judicial norms. Mr. Trump must e stopped from persecuting political enemies; from interfering with the nation’s intelligence and law enforcement agencies — FBI, CIA, Department of Justice. The next Congress must protect the Special Counsel, Robert Mueller. the next Congress must investigate Mr,. Trump’s cabinet for abuses of powers and perks; must life as difficult as feasible for White House staffers who would abuse, circumvent, or seek to get rid of, laws and regulations that ensure impartial administration. At the same time, the next House must prepare for its own re-election, defending against Mr. Trump’s candidates.

We don’t often write about national politics — there’;s plenty of big media who do that all day long — but with this matter we feel compelled to speak and to argue, hopefully to persuade.

Nancy Pelosi has solid union backing, new support from her “progressive” members, and the support of her party’s donor base.

She is 78 years old ? She looks 20 years younger, p;roof that constant engagement is the healthiest revenge.

Some say that the Democrats need “new blood.” maybe they do; but this is not about just Democrats. The nation, actually, needs its old blood to step up , to rethink its distrust of the future. Roanld Reagan was in his 70s when he sounded all those notes of optimism about America that made him beloved. Who better to grab the ring of positivity — and to show us how — than those whose time is shorter than forever ?

The next Speaker must be able to meet the press without notes and speak with all the experience and authority she can muster from a full lifetime of political battles-royal. Is there any doubt that only Nancy Pelosi, of all the likely candidates for Speaker, is the obvious and necessary choice. Today, her only significant rival, veteran Congresswoman Marcia Fudge of Cleveland, endorsed Pelosi.

We do the same.