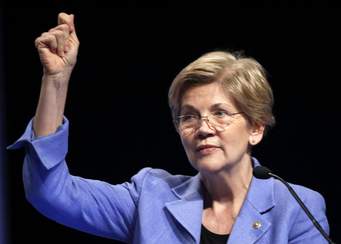 ^ more than just a label : Senator Warren deserves a worthy opponent. Will there be one ?

It wasn’t hard for me to evaluate the Presidential candidacy of Chris Christie. One day, up in New Hampshire last year, I heard him deliver one of his “fist in your face” speeches. About ten minutes later, backstage, I met him and we talked. He was super nice, a gentle and easy going man completely unlike the leatherface I had just watched.

Was he, then, just an actor, playing a role ? The Presidency, to him evidently, was merely a traveling vaudeville shtick. I was disillusioned to say the least.

Granted, that Mr. Trump demonstrated that you can play political vaudeville and still win it all. To this day he’s still doing that, at enormous cost to our social cohesion as a nation, and so far it has worked. For some folks: according to most polls, barely 35 to 38 percent of the voters approve of the job he’s doing. Do they actually believe that when he says stuff he means  it ? That they think he’s authentic ? I have my doubts that it matters.

Perhaps I am hopelessly old school, but I believe that if you’re going to run for office, you should listen to people more than you talk, and that if you do talk, you’d be wise to be your best self. I also believe that you shouldn’t have your campaigners send out silly e mails calling your opponent bad names.

For example : today I received an e mail, from “Bonnie and Marty,” whoever they re, telling me that Senator Elizabeth Warren is a socialist.

I’m not a certified economic theorist, but so far as I can tell, Senator Warren is hardly a socialist. It is true that she supports social security, and Medicare, and maybe wants to see a single payer system for health care. Well ? So did Theodore Roosevelt, and also Otto von Bismarck — hardly socialist men, though they did believe in activist., centralized government. They felt that centralized, activist government worked, that it won the loyalty of the average voter. Is that a bad thing ?

From the vantage point of those who believe that effective central government is a bad thing — that a Federal government shouldn’t do very much — supporting a whole lot of government stuff seems to make you a socialist. I find the argument boring, and silly.

And why did I even get this e mail ? Evidently I’m on some sort of list, one that you are on if the sender assumes that you are opposed to Senator Warren and that you don’t like socialists. But how did my name get onto such list ? Wait — I know why. I supported Scott Brown in 2012, indeed donated to him, when Elizabeth Warren was his opponent. The persons who put me on their mail list assume that because I opposed Senator Warren in 2012, I must perforce oppose her now; and they also assume they know why I opposed her.

They’re wrong on both fronts. I did not oppose Warren in 2012 because I am not a socialist. I opposed her because I thought Scott Brown had done a reasonably good job and because I liked the idea of our state having one Senator from each of the two major parties. I still support this second reason, but I am unwilling to see just anyone at all be our Republican Senator. You want my vote, you had better demonstrate to me that you will enhance our state’s political clout, not embarrass it. Otherwise, I’m voting for Senator Warren — as I would have in 2012 had I found Scott Brown seriously wanting.

I expect both my state’s Senators to understand the issues they will vote on and to support legislation that will benefit everyone, especially those who need government to be their voice because they don’t have the money to fund their own voice loudly enough to be heard. Senator Warren makes some mistakes on specific issues, but she seems to have her priorities in order, and she does recognize the need to be  a voice for the voiceless, even if at times her voice seems more loud than profound. Meanwhile, the opposition, so far as it advances an actual position on an issue, expresses contempt for the voiceless and thinks we who support the voiceless are all kool-aid drinkers.

You may win the votes, by such means, of those who weren’t going to vote for Warren in any case, but you sure cannot win the votes of a majority, not in Massachusetts anyway, by freaking and name calling. That’s actually a pretty general campaign principle : I want to know what you are FOR, and why you will be effective in getting it, befoire you tell me why your opponent is bad.

So far, Senator Warren has one declared opponent, State Representative Geoff Diehl. Diehl was Mr. Trump’s Massachusetts campaign chairman. Mr. Trump was defeated in our state by 61 to 33 (the rest of votes going to minor candidates). Today Mr. Trump has a 28 percent approval rating in Massachusetts. I do not see in what way Diehl’s being Mr. Trump’s man in this state enhances his candidacy, such as it is. I can certainly say that no candidate who has connection to Mr. Trump or his agenda (if he has one) will have my vote against Senator Warren. Nor will he or she probably have yours.

Still, not many of us want to see Senator Warren automatically re-elected. There is solid reason to not like her “voice first” style. Her favorability numbers, in recent polls, bears that out. They aren’t overwhelmingly great; there is some dissatisfaction, much of it arising from her occasional carelessness (or lack of preparation). A strong argument can be raised in opposition, and it would be good for our democracy if such strong opponent were to run on a platform of “can do.” There are a few who could fit that role, but so far I see none of them stepping up.

If one of them does step up, there is no guarantee that he or she will take the course that I recommend : contend with Senator Warren on the issues. Accept what the overwhelming majority of Massachusetts voters wants — firm opposition to the Trump agenda, and perhaps a single payer health care law — and suggest a stronger route for getting to it than Senator Warren proposes. Is there some rule that says that a candidate cannot convincingly say “we agree on what should be done, but I can do it better” ?

If a Warren opponent can’t take that route — if the opponent is not a person of impeccable credibility — and thus the campaign devolves to an affair of labels tossed like ping pong balls — Warren will likely be re-elected easily, and should be, much to the disadvantage of our state’s standing as an example of political debate at its best