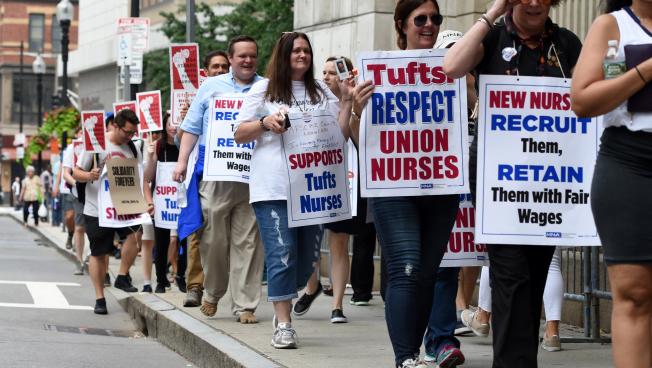 We have seen, this past week, plenty of strife and controversy in the matter of the strike by Tufts Medical Center’s nurses. The hospital has brought in replacement nurses, a sit must; patients’ health problems do not go on strike, and that being the case, without replacement nurses, Tufts Medical Center would have to shut down rather than offer inadequate care to the very sick. It is always a risky thing for an employer whose wage employees strike to hire replacements, and just because Tufts is a hospital does not insulate it from the picket line consequences. If the reports that I have read are true, those consequenecs have been the usual : verbal abuse, even the threat of violence (both of which the striking nurses deny have happened). The strike continues, and so does the hiring of substitute nurses.

I begin this column with the Tufts situation because it arises — so the reports narrate in much detail — from the pressure that surging health care costs have imposed upon medical institutions. These are well known to policy makers : the rising cost of drugs, much of it attributable to the increasing difficulties in research; an even larger increase in the price of medical equipment, caused by their increasing intricacy; longer hospital stays and more expensive treatment, because more people are living much longer, and people older than 70 experience more diseases and system failures than those younger; the inability of many medical institutions to adopt the most cost-efficient records keeping means; and the expansion of medical administration resulting from the takeover of health care costs by the insurance industry.

Last year, Governor Baker decided that he could no longer defer the daunting challenge of proctoring our state’s health costs, which (in the upcoming year) amount to more than 40 percent of its $ 39.4 billion figure. The plan that he came up with surprised me, as it asked employers to contribute up to $ 300 million toward Massachusetts’s $ 16.6 billion Medicaid allotment. In June Baker offered a compromise, which you can read at this link : http://www.wbur.org/commonhealth/2017/06/20/health-care-costs-baker-employers

Baker’s compromise proposal did not survive the legislature’s FY 2018 budget vote, but others of his health care cost containments did prevail. You can read the update here https://www.boston.com/news/politics/2017/07/07/massachusetts-lawmakers-approve-compromise-40-2-billion-state-budget

Such has been the first legislative response to the package of changes to our health care budget that Baker proposed on July 1st. The Boston Globe editorialized more or less favorably to the Baker proposal, as you can read here : https://www.bostonglobe.com/opinion/editorials/2017/06/30/decoding-baker-mass-medicaid-changes/qnWg7cjtRpoD0fek1YrXEP/story.html

As the Globe editorial stated, the task facing the legislature and governor is not easy or quick. 40 percent of the state’s budget can’t be reshaped that fast. Apportioning health care invoices is only the surface problem. The real difficulty rests in those invoices themselves. I itemized most of these above. Many of them transcend the efforts of one state only; a few can’t be cured at all, only accommodated. The consequences of more people living much longer, in particular, affect every part of health care’s invoices. Disciplining these costs will only succeed once medical science learns how to manage aging itself. That day is surely coming, as we grasp the genetic codes that supervise our bodies. Yet if people become able, normally, to live to age 110 and even beyond — and do so in their own house or apartment, not in a warehouse euphemistically dubbed a “nursing home” — they will face disorders whose dimensions — and treatment thereof — we can’t begin to compute. Not to mention personal attention needs giving rise to an entirely new — and potential enormous — class of home care careers.

Yet who would prefer health care to retreat from its advance ? Not most of us.

Now back to the Tufts Medical Center situation. Reports suggest that Tufts is falling behind rival medical centers for two reasons : first, it lacks the price negotiating clout of larger medical institution; second, its revenues aren’t growing fast enough. Tufts advances these factors as reasons for its refusal to meet the nurses’ wage and benefits demands. The nurses assert that Tufts can in fact afford the benefits changes it seeks.

Which side is right, I cannot tell, as I have not seen the Tufts Medical Center’s FY 2017 accounts. Yet surely the Tufts impasse will not be a one time only occurrence if health care costs continue to grow faster than the economy. Tufts, as a small institution, has evidently suffered from lacking sufficient economy of scale. Yet size isn’t always a plus in the world of health care. The individual attention that we all want from health care providers contradicts the mass production economy of large institutions. In that regard, health clinics offer personal attention and, in many cases, expertise in a few areas of medicine that draws patients to them — call it “boutique medicine.” Whether clinics can survive depends on that niche expertise. Perhaps Tufts’ future is to downsize to clinic status and not try to emulate the price dominant large hospitals.

For most of us, however, the “general hospital” is our likely destination. There, the economy of scale may accommodate factors difficult to reconcile : high salaries for staff, stingy reimbursements by insurers, a bull market in the prices of medical instruments, therapies, and drugs. Only one course might resolve this blockade: single payer health care, in which the entirety of health care invoices becomes a charge on the Federal budget — in other words, Medicare and Medicaid for all.

Can single payer do the trick ? Perhaps, yet it too is subject to its own blockades : ( a ) will taxpayers always agree to the demands of medical invoicing ? ( 2 ) how can a single payer system prevent overuse of facilities by people taking advantage ? ( 3 ) how do we assure that hospitals and clinics do not go the route of the Veterans Administration, which in some cases offers substandard care ? If health care workers become, in effect, Federal employees, how do we motivate them to their best efforts rather than settling for job description minimums ?

As we seek to contain health care costs — as we must — all kinds of questions thus arise that few policy makers want to take on. This is why it takes a nurses’ strike to force legislators to answer for the almost un-answerable.