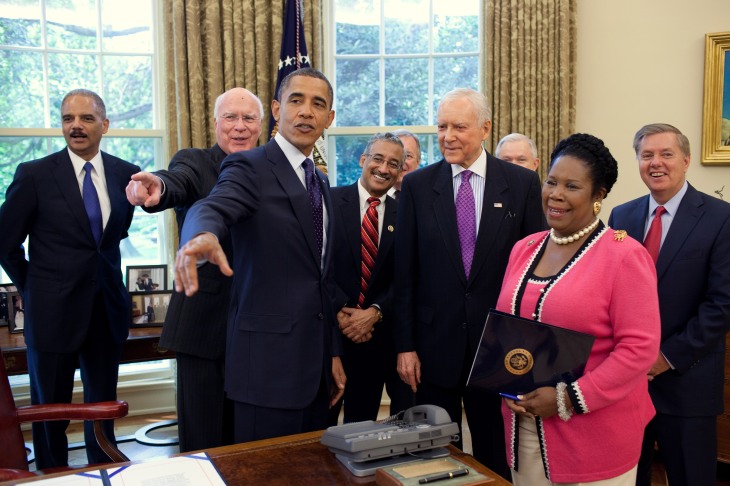 President Barack Obama talks with Members of Congress after signing the Fair Sentencing Act in the Oval Office, Aug. 3, 2010.

^ “the establishment.” It is everybody, not just you, and if you are a citizen, you are invited to be in it.

Commonplace it is these days to revile “the establishment,” a term of political reckoning easier said than described. I suppose that what revilers mean is “the government,” which in turn musty mean the people who do what their job descriptions say they must do — including writing those job descriptions.

I’m speaking mischievously here. To revilers of “the establishment,” their pain is real. “The government” doesn’t, care about them; they know this. Why do they know it ? That’s an interesting question, but it’s kind of beside the point. Once a person becomes an habitual reviler of “the establishment,” his revulsion takes on a life of its own.The reviler becomes invested in his revulsion. We see this on social media, where a public platform authenticates his investment.

The reviler feeds the beast. Every day his outrage finds verification in some internet posting, or, if it’s a good news day, in some outside event that proves to the reviler that “the establishment doesn’t get it.” The recent bombing in New York City ? “The government didn’t get tough enough.” The President can’t re-enable the dying coal industry ? It’s his fault. I could go on well past your patience.

Revilers of “the establishment” aren’t completely cuckoo. Almost every Federal agency operates under a system oif disclosure, process, and guidelines that incorporate more of politics than of efficiency. The object seems to be to get done only stuff that offends no interest group, or no member of Congress. Federal employees often seem to spend more time complying than performing. Yet this is  a mis-impression. Most Federal employees I have interacted with are remarkably well spoken, well dressed, well mannered, and very, very competent.

The difficulty is in the job itself. We operate a humungously complicated society; how can the government that governs it be any less complex, and do the job of governing? It can’t.

So let me now say what the headline to this editorial suggests : “the establishment” consists of people who have, mostly, become “established” in government and/or political matters by participating; by stepping up to the tasks, and the challenges, and the reforms, and helping to do them. That’s really all that it takes : participation. I have never seen an “establishment” person tell someone who seeks to participate that he isn’t wanted, or that he can’t come aboard.

There’s no bar at all to anyone’s stepping up to political missions. Our society used to encourage it. We should always do so. A citizen has rights but she also has obligations to the society that has accorded citizenship to her. I think of citizenship not just as an end in itself but as an invitation.

Once a person — non citizens can participate too, except that they cannot vote — joins in a movement, or an advocacy group, or a campaign, she finds that everybody else aboard is just like her. “the establishment” isn’t made of space aliens. It’s people who live next door. And that’s true for almost every neighborhood. Even in our racially and income segregated society, participants in “the establishment”: live on almost every street, including yours, and mine.

But enough of generalities. Let us talk particulars. We all know that some government offices do not work well; resist change; sometimes actually injure the people they’re supposed to serve. Too easily government offices become the prime thing for those who work in them — just as the reviler of establishments becomes invested in his revulsion, so the employees of government offices become invested in the agency, serving it, not those it was created to serve. It’s up to the citizen to give them a heads up, even a spanking. And to get the agency reformed like crazy.

But we do this not to destroy the office but to make it do its job. As Governor Baker says, “at the end of the day, people want the services they want to have, done right.”

I leave you here for now. This is an editorial that bears lengthening. Tomorrow I will update.