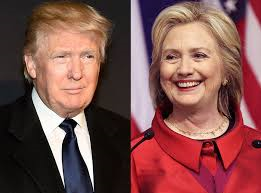 ^ he fumbled and punted, she scored several touchdowns : it was Clinton all the way last night,. But is that all ? Not so fast.

Some of Hillary Clinton’s supporters were worried about how she would fare last night at the first debate, which is usually the crucial one. They need not have worried. She met the occasion and made it hers.

In retrospect, that was probably inevitable. No one who watched Clinton stand up to, and overpower the entire line up of inquisitors at her 11 hour Benghazi investigation hearing should have had any doubt that she could truck her way through 90 minutes of increasingly unfocused Donald Trump, blasting him several times that few who watched will forget.

What effect will her 90 minute demonstration of command of the issues and reliability have on the actual election ? Were the vote taken today it would affect the result a lot. Trump’s voters don’t care what he says , or how he says it, but undecideds do care. This year there’s an unusually large number of undecided voters; I cannot believe that they found reason last night to break for Donald Trump. One national poll asked “who won ?” and had the result at 62 to 27; another said 51 to 40. The 62 to 27 poll, by CNN, probably represents only the debate itself; but the 51 to 40 poll feels a lot like an actual vote preference. Trump has almost always polled at least 39 percent of the vote. Of late, he’s settled into a 44 percent base. A 51 to 40 poll says that last night cut that raised vote back, reducing him almost to his bottom. The debate really was that damaging to him.

Every segment of the debate, Trump was worse than in the previous. His ending was as discombobulated as it gets: he was mouthing gibberish. Along the way downhill he coughed up some truly cringe-worthy talks : his “birther” answer was  disgusting; his attack on Rosie O’Donnell petty; his statement that paying no taxes was “smart: was the opposite of presidential. He entirely blew the “First Strike” nuclear use question, and his statement that NATO members “should pay us for defending them” was batty. He rambled and ad-libbed the Iraq questions — and lied about his views, over and over again. Little wonder that Clinton began her summation speech by reassuring our allies that we will keep our treaty commitments.

One of Trump’s worst moments was his charging Clinton with not having the stamina for the job. This was an entirely willful accusation on his part; the moderator didn’t ask him about her stamina. Clinton blew him out with her answer : “after you’ve traveled to 122  countries…and endured eleven hours of Benghazi hearings, then you can talk to me about stamina.”

Actually, it was Trump who lacked stamina to go even 90 minutes focused, much less 11 hours.

Trump’s cavalier misogyny glared at the close, as did his word salads, and as it is last impressions that s tick the surest, he ended at his worst; and as last night’s debate was likely the first time most voters have seen him at length, these voters cannot have been edified by what they saw.

It’s hard to tell what the consequence, a week or five weeks from now, will be of last night’s show; but for now, Clinton’s performance has to boost her vote. It will enthuse her supporters (and they needed that), and it will move many undecided voters to at least lean her way. It may even trim Trump’s vote share a bit. Yet the election is NOT taking place now. Clinton remains a solid, perhaps too solid candidate of scant embrace : one thinks of Theodora, or the first Queen Elizabeth, even Maggie Thatcher : women leaders who have found their surest strength in rigid imperiousness and impenetrable command,. It has worked, and it probably will work here, now, in America, with its imperial central government. But I wouldn’t declare victory just yet. The male leadership model runs deep in our political conversation, and an egregiously flawed Trump unafraid to let all his flaws hang out has an air of authenticity hard to deny.

Difficult, too, to conceive two more dissimilar candidates to be commander in chief. In that abyss of difference lies the great, the vast election unknown.

Still : for now, Hillary Clinton rides high. Her supporters should be enormously happy this morning.