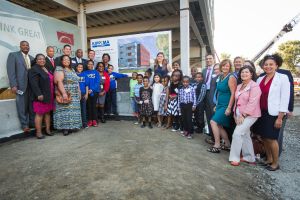 ^ Injustice Nation —- KIPP Academy in the City : to the rest of the state, “not our problem”

Absurd it may be, but skin color remains the prime root of injustice in America. Injustice has other tangles — immigrants, people living in poverty, the disabled and even the ill — but many of these coincide with skin color to make injustice an entire oak tree of roots.

Many of us like to decry skin color injustice, but no so many are ready to tackle the practicing of it. People who live under the gun of injustice live most likely in cities, and they are a major reason why so-called “conservatives” dislike cities. “Injustice nation,” as I shall call it, is discouraged and often blocked from moving to suburbs; fair housing laws we have, but not the living up to them. Injustice nation has universal health care now, but would not — will not — have it if the enemies of injustice nation have their way.

Injustice nation is feared by many police forces, many of whose officers live far from their beats, and the fear is mutual, as it almost cannot avoid being when the two live so far apart.

Injustice nation is blocked from paths to great employment, often harassed if its citizens get said jobs, and often paid less. Injustice citizens are often laid off soonest and find it hardest getting back to the work force.

Injustice nation has far less room to amass assets, to network into influence, to go about on foot or by car without being profiled, harassed, even arrested and sometimes worse.

Yet we expect injustice nation to “make it” somehow.

We do not see, or do not choose to see, the obstacles that injustice nation faces.

It is expensive to be a citizen of injustice nation. It is unhealthy too. Those who live in injustice nation and have money (via a good job) still pay more : to escape failing schools; to buy home and auto insurance, even life insurance; to travel to where the good jobs are; to buy groceries. It’s worse still for citizens of injustice nation who have small income. They cannot pay to re-register a car or to repair it, they can’t own, they have to spend three hours commuting through several bus and subway changes, they pay to be bailed out of jail, or to pay fines; they are more often arrested and so lose time and maybe a job; they have a much harder time finding a safe apartment to rent. They have less education and so cannot get hired by many jobs; and they live shorter and unhealthier lives because stress never leaves them, or their families.

If we see the protestors in Black Lives Matter overreach, or cross the lines of civic respect, much of it I attribute to endless frustration at their (or their neighbors) being constantly chafed and disrespected, feared, overlooked. I do not excuse the overreach (Colin Kaepernick’s spurning the Star Spangled banner, for example), but I do understand why it happens. And I say this: if you do not like what Colin Kaepernick did, work to make his gesture unnecessary.

All of the above leads me to two events now in process here in Massachusetts, both showing the necessity of overcom injustice and the difficulty of doing so.

The first event is the announcement, by Governor Baker, that the state will no longer permit prison guards to be stationed within the mental helath unit at Bridgewater Hospital for the Criminally Insane. Baker’s reform also scraps the correction mel for administering people in Bridgewater custody in favor of a mental helath treatment paradigm : https://www.bostonglobe.com/metro/2016/09/12/baker-plans-overhaul-criminal-justice-system-handling-mentally-ill/KIpXNF1YTfD81TEY1zWvjN/story.html

The difficulty that I mentioned is first, that it took seven years to get here after the death of Joshua Messier at the hands of correction officers, a death that was judged a  homicide; and sec ond, that as long ago as 1967, the movie “Titcut Follies” (link here : http://www.google.com/url?sa=t&rct=j&q=&esrc=s&source=web&cd=1&cad=rja&uact=8&ved=0ahUKEwiYrKX0oZTPAhXEZiYKHULnDyQQFggfMAA&url=http%3A%2F) %2Fwww.zipporah.com%2Ffilms%2F22&usg=AFQjCNEcqLK4R7SongtVXDls3aIjDfG4sw&bvm=bv.133053837,bs.1,d.eWE) cast horrific light on mistreatment of persons held in Bridgewater custody.

50 years to correct rank injustice seems a bit long, no ? But hey — out of sight, out of mind.

The other event I need to discuss is the current drive to secure, at the Novemeber election, a lifting of the “cap” on charter school numbers.

School choice is vital to parents and their kids who currently lack any choice but the underperforming schools that abound within the borders of Injustice Nation. Support for “lifting the cap” is almost universal among parents of color who live in our cities. Massachusetts citizens overwhlemingly support justice for people of color. Yet polls tell us that the ballot question now lacks a majority. Why so ? Simple : charter school expansion directly benefits only Injustice Nation. It offers nothing to the rest of us; thus nearly all of our 300-odd municipal school committees — excepting only school committees in our biger cities — have, under pressure from local teachers’ unions,  oppose charter expansion. After all, if a reform isn’t for you, but only for Injustice Nation, why support it ? So goes the reasoning, evidently.

They hide behind the lie that charter schools take money away from standard schools’ budgets.

This is a lie, no less a lie than Trump’s 1000 lies. Charter schools do NOT “drain money” from school districts. If a school district has 57,000 students, and 10,000 of them choose a charter school, that’s 10,000 less students that that district has to budget for. As it currently costs the Boston district about 22,000 to educate each child each year, if 10,000 of its students choose a charter school, that’s as much as $ 220,000,000 less that the Boston district needs allocate. Of course — I can my opponents sputtering in fury — 10,000 less students do not actually save Boston schools $ 220,000,000. Some school buildings, shorn of utilization, can be consolidated with other schools, but those  need be open, heated, lighted, and maintained; nor can twenty percent of teachers and classroom aides be laid off thereby. But some can be laid off, and school consolidation saves money, as does 20 percent less transportation costs.

Of course what CAN be done probably WILL NOT be done. If you think the teachers unions are laying an hysteria upon us now, wait till you see the typhoon of crap that hits Boston were it to do the economically right thing with its school budget.

Cities attract us, and they house the largest segment of us. So why aren’t their reforms paramount to all of us ? Today’s city people are tomorrow’s suburbanites. What do we not see about our refusal to accord city reforms primacy ?