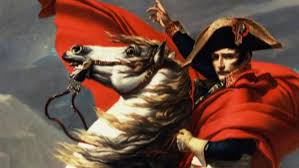 If you read the history of Britain’s long struggle against Napoleon, from 1790 to 1815, you will be amazed, since everyone now counts Napoleon an egomaniacal, destructive ogre, to find that a large segment of British public opinion supported the Ogre and hoped for his victory of British troops. Right up to the week before the decisive Waterloo victory, British Whigs were carping for “Boney” to smash the redcoats; not long before, these same politicals were poo-pooing the Duke of Wellington’s classic Peninsula campaign and doing everything they could to destroy his reputation.

It is disheartening to see a significant number of a proud nation’s political leaders rooting for its defeat.

I mention these matters from 150-odd years ago because something of the same has awoken in our own election campaign. On the one side, we have Hillary Clinton, fighting for just about the entire range of progress that is mortally opposed by progress’s enemies; on the other side, a devilish, maybe psychotic demagogue who loves Russia’s Vladimir Putin and says so and whose campaign manger, the odious Manafort, has money ties to Putin and his thugs — former KGB poisoners who now steal their nation’s assets and who murder their opponents, including journalists. Given that Putin has been our enemy, and Europe’s enemy too, these past ten years or more, and that he is doing his best to undermine our nation at home and overseas — yes, Virginia, the Cold War is back — you would think that a candidate for President would hurl political obscenities at Putin, not send him orange cheeto kisses. But you would be wrong.

Not since Aaron Burr, who was in 1804 our vice president, tried to engage the Spanish in creating him a separate frontier nation, has a presidential contender toyed with treason. How did this happen to us ?

Burr made his treasonous pact for personal, money advantage. Trump and his gang are doing so because he hates the tolerant, inclusive, diverse America that is coming to be — and is glad to arouse all those who hate it as he does — and because he, like Burr, believes himself the only person in the political universe who counts. And because he admires Putin’s government of thuggish embezzlement. And if that is Trump himself, what can we say about the substantial following that wants him ? Despite the dictatorship of threat and payback and the outright thuggery that he almost boastfully announces ?

Better dictatorship and thuggery, in their minds, than to see people who do not look like them, or live as they live, or who are not macho males, or who came to this country uninvited to seek a better life, take power and make America something new in which they, the Trump campers, might not be able to lord it.

And the fear. The gun-toting cowboy response. The fear of bogeymen and aliens. Putin nation.

Trump’s thuggery has been called “weaponized politics of nostalgia.” Shrewd observation, but incomplete. The Trump dictatorship of armed vigilantes, violent bigotry, closed door policies, personal hucksterism, fraud, and insult of everyone perceived as weak is politics of the jackboot. It is nothing American, and those who seek nit want nothing to do with America; indeed, they seek to end America, the nation and the idea.

America is more an idea than we realize. It is an ideal, one that we have almost always aspired to; a nation in which liberty and union go together and in which all men (and women) are created equal, a nation in which the General Welfare is the goal of government, a nation creating itself, all hands on deck.

It’s a noble idea and an heroic ideal, which is why so many millions want to join us, to help build something better. Yet an idea and an ideal are all that America ultimately is. If enough people who vote here do not want America, it won’t be; it will go away. Right now, we see that almost half the voters want something other than America and are willing to vote for a man who sells out to Putin and his gang of thugs, to line his wallet, if that’s what it takes to get America out of their lives.

An enemy is within us; Putin loves it; and we had better wake up to what is being done to our blinded nation before it is too late.