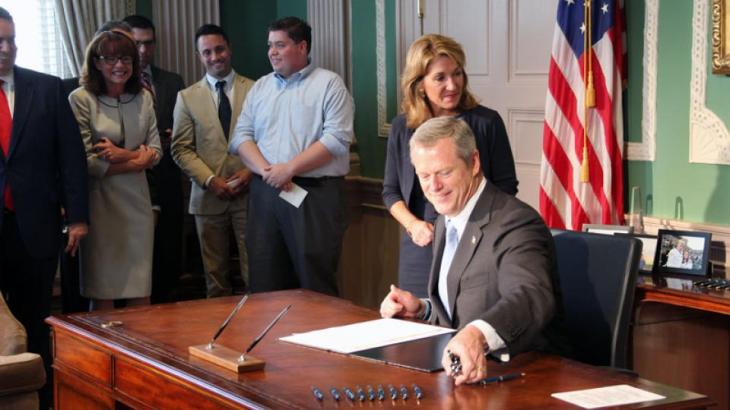 The legislature enacted a state budget for fiscal 2017 that somehow managed to expand funding for crucial state services despite there being no new taxes — as well as a significant revenue shortfall. Not surprisingly, the budget which Governor Baker agreed to sign leaves several state services under-funded.

But not to worry : Baker will submit a supplementary budget to fund those shortfalls. To quote his message :

“We have identified several underfunded accounts, such as the Committee for Public
Counsel Services and the Emergency Assistance program, which we know we will need to fund at higher levels during FY17. In addition, we remain committed to our obligation to fund Other Post-Employment Benefits (OPEB) at $77 million versus the reduced amount of $26 million in the conference committee report.
“In conjunction with today’s budget signing, we are filing an FY17 supplemental budget
for the underfunded accounts plus $5 million for substance abuse services to further support our ongoing efforts to combat this epidemic, as we filed in House 2 and believe is necessary.
“To accommodate the spending and revenue differences with the conference committee
report, we are making corresponding corrective measures in order to balance the budget and maintain fiscal stability. We are vetoing $256 million in line-item and outside section spending, including $60.6 million across 497 earmarks. Of the 200 outside sections presented in the conference report, we are signing 141, vetoing 36 and amending 23.”

Baker had more to say. He vetoed a variety of line items, igniting several fires of complaint :

So much for the verbiage. Let’s talk about a few of Baker’s more controversial vetoes.

First : an entire series of Courts and Legal Administration reductions made, in his words, “to the amount projected to be necessary.” (Projected by Baker’s Office of Administration and Finance, no doubt.) Of all these reductions, one stands out : a decrease of $ 16,757 in the Recidivism Reduction Pilot Program. I would think that, recidivism being a major difficulty for prisoners facing re-entry into the community, this line item would be increased, not cut. Also cut : $ 211,328 from the Community Corrections Administration’s $ 21,132,834 appropriation and $ 5,000 from the $ 500,000 District Attorney Heroin Pilot Program.

Second, Baker vetoed several appropriations involving voter registration and early voting. Much was made, in news reports, of the $ 4000 cut from the state’s $ 400,000 early voting program. More troubling to me is Baker’s $ 58,549 cut to the state’s approximately $ 6,000,000 Central Voter Registration, given the enormous expansion of voter registration for November’s unnerving Presidential vote. What was his reasoning ?

Third, Baker ( 1 )  almost eliminated an Economic Empowerment program which he termed “not recommended. I would like to know why. Doubtless Workforce Development Chief Ron Walker has an answer ? ( 2 ) cut by more than half the Massachusetts Cultural Council’s $ 14 million appropriation. Funding for the Arts is always easy to cut. That does not mean it should be cut. Given the current pessimism and isolation afoot in the state’s public life, I’d expect artistic expression to expand, not cut back.

Fourth, Baker made substantial reductions — over $ 2,000,000 — in the Budget’s various Environmental Protections appropriations; reductions in fisheries and waterways management; state parks and recreation funds (over $ 5,000,000); and an enormous reduction in the Transitional Assistance account : $ 23,590,222, reducing the appropriation to 167,625,494. I have no idea on what information Baker has made this determination.

Much of this veto activity undoubtedly represents back and forth negotiation between Governor and legislature, as always; overrides will surely ensue, restoring the funds cut ? But maybe not. For many of his item reductions or outright veto, Baker states “not consistent with his recommendation.” Evidently Baker has his own ideas on how state services should be set up. We already know that he is remaking MBTA administration quite radically. Is this the basic objective of his more significant vetoes ? It makes sense if so. Structural reforms seem needed in many state departments in which lines of authority and job description don’t take into account the cost-efficiency rigors of “data management.” Many of baker’s vetoes and cuts were made because they didn’t comport with his recommendations. Could it be that before he accepts the funding, he wants the structure that will expend them to be his choosing ? If so, his vetoes and cuts are far more significant than they look at first glance.

Baker made clear from day one that he wanted to reform state administration from the bottom up, structurally; to redeploy how state government delivers services. His  FY 2017 vetoes and cuts look like wedge moves toward that goal.

As Baker’s restructure reforms deepen, expect many battles between Baker and the legislature and with the constituencies who value every dollar appropriated to their priorities, not to mention more dollars not granted at all. The Supplemental FY 2017 budget request will certainly tell us more about Baker’s long-game intentions. It should be a dramatic show.