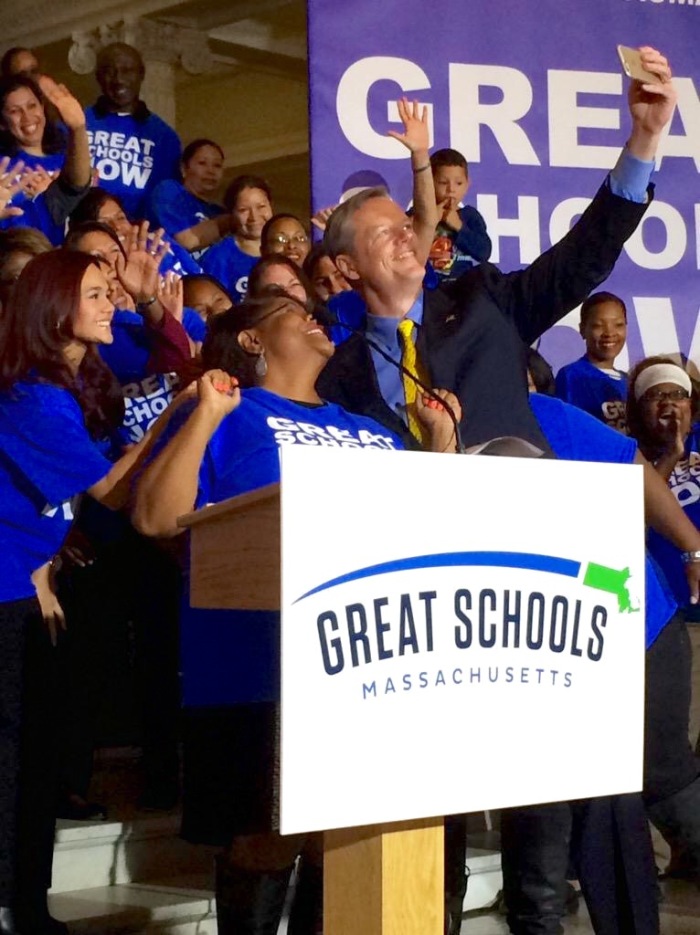 ^ leading the charge for charter school expansion : the Governor and his rally troops of kids

As many of you already know, there will be an initiative on this November’s ballot, seeking to expand the number of charter schools allowed by Massachusetts law. The expansion will affect only school districts which are determined, by the State’s Department of Education, to be in the bottom 25 percent according to the State’s performance tests. Doubtless these tests are themselves liable to much criticism of standards applied, but that’s an issue for another day. In this article I want to focus singly on the rationale for charter school expansion, and to critique the political partisanship that some are adducing in its support.

For me, charter school expansion serves two cardinal policy goals : first, it offers children in under-performing districts an effective, disciplined alternative path to an education assuring their readiness for highly skilled employment upon graduation; second, it promotes that education can no longer be ruled by one common standard — that in the innovation economy, many styles of pedagogy, and many sorts of curricula, will enable students, themselves of diverse4 cultures and states of preparedness. Yes, we do educate students for citizenship, as well as employment, and for citizenship, a common curriculum creates community. But diverse employment curricula do not per se exclude citizenship learning and should not be advanced as an argument against innovation schools.

Funding is the big argument being debated in charter school expansion . The mantra of charter school opponents is that they divert public funds — taxpayer dollars — away from public schools and into the hands of private entities. This argument is false.

First, charter schools are public. Any child who wins the selection lottery can attend.

To sum up : we accept that education is a taxpayer responsibility because schooling our children properly is vital to the progress of the enti8re community and cannot be left to the chance of economic markets. In return, taxpayers this charged have every right to demand that their tax dollars be applied as effectively as feasible, and applied fairly, too: schools that fail, students of color, or from non-English language homes, must either be reformed or replaced; nor can there be any tolerance for the sorts of inefficiencies that tie down a district budget such as Boston’s $ 1.03 billion 2017 proposal.

The huge Boston budget is especially outrageous considering how many students of color — some 87 percent of all Boston Public School students — now clamor for admission to a charter school, where academic performance can rise to the State’s top quintile rather than  hunker in the bottom quintile, as does the Mattahunt Community School (thanks to friend Ed Lyons for this comparative statistic.) Too easily, students in low-income zip codes get shafted by school budgeters trying to fund redundancy instead of classroom needs — not to mention home visits by teachers, a longer school day, and nutritious lunches, rather than duplicative teaching payments, overcapacity, and more.

I understand that vested interests feel their situations insecured by these imperatives. In particular, teachers who now enjoy rigid work rules face enormous redeployment and re-configuration of their job duties. That, however, is a challenge for teachers’; unions, not for the public. Teachers unions badly need new, flexible, imaginative leadership, and it is there, too: but it has been difficult to get such new leadership elected by the rank and file. That will have to change, if teachers’ unions want to be part of education’s transformation rather than run over by it.

If Republican supporters of charter school expansion want to benefit politically from their work on the issue, they should work it for the issue’s own sake. The voters will not be electing you because you are a Republican but because you support policies that they support. You may care that you are a Republican, but almost nobody else does. Policy progress is what our voters care about. Everything else is coincidence.