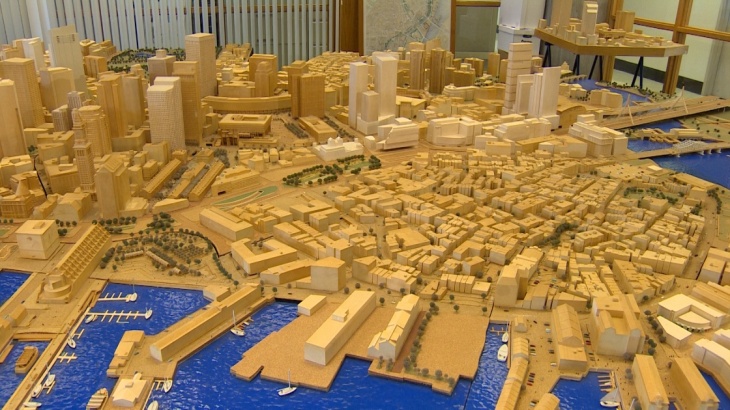 ^ hot or not ? right now Boston is hot hot hot, and many of us don’t like that because we have to pay for it

To fizz this relentless bubble, Boston has tried rent control, which made things much worse. We’ve tried condominium conversion — which has made renting more difficult. We’ve built all manner of homes — but almost exclusively for the high end buyer : because land to build upon costs the same whether you’re building a $ 300,000 house or a $ 650,000 McMansion; so builders built McMansions. Building permits are issuing all over the City, but it isn’t working. Prices are still going up. (Yes, during the mortgage collapse of 2008 to 2013, prices went down; in some neighborhoods,m way down. But today they’ve fully recovered, and in the City’s priciest spots they’ve moved way higher than ever.)

What are we going to try next ? No one is building houses in the suburbs, because today’s typical home buyer wants to be in the City — as c lose to Downtown as possible. Live Downtown, and you don’t need a car; your friends all live nearby, the nightclubs and boutiques can be walked to, and all that money that suburban people spend on cars, car insurance, garaging and gasoline can be spent by you on high end clothes, $ 1000 Louboutin shoes, $ 50 to 75 a plate “fine dining,” $ 150 per ticket arts events, $ 500 a ticket Mayor Walsh birthday parties, and a night at the trendiest craft brewery. Or on your monthly $ 6000 mortgage payment for your condominium in the Seaport or South End. It’s an attractive life, even if you have to work 80 hours a week to afford it. And because so many of us now live it, all the services (and their employees) that serve Downtown life also locate in Downtown. So is this trend unstoppable ? Maybe so.

Unfortunately, not all of us can afford the Downtown Life. We all know that incomes in America are diverging : high incomes are earning more, middle incomes less, bottom incomes the same. Our political leaders know this too. Both Mayor Walsh and Governor Baker have called for building thousands of new “affordable” houses and condominiums; Walsh cites 5000 new house build permits in 2015 alone. As for Baker, even as I write, he is announcing “significant housing production in…his upcoming capital budget plan. As his budget office puts it, “The  capital investment follows last week’s announcement by Governor Baker of  a new $100 million workforce housing development fund established in partnership with MassHousing to support the creation of 1,000 new units of moderately-priced housing.”

Yet even these City and State resolves don’t seem enough. Mayor Walsh is calling for 53,000 new residences to be built in Boston by the year 2030; he may well get more than that built; but the City’s population has grown by at least 90,000 people since 2010, and judging by the thousands of building proposals now awaiting BRA action, perhaps 50,000 to 100,000 more people will flock to Boston by that time. Where will they live ? From the rent rises going on all over Boston, it looks as if these new residents will live where current residents will no longer be able to afford.

One wants to stabilize rents so that that “displacement” does not happen; but how ? Rising rents mean significant renovation, upgrading, modernization of residences : today’s $ 2,000 apartment is a haven of luxury compared to the antiquated, firetrap apartments that rented for $ 50 a month 45 years ago. Nor do today’s $ 650,000 houses compare at all to the flimsy, plywood walls, cheap windowed, miserably applianced stuff that buyers of $ 16,000 ticky-tack homes had to accept in 1970. What landlord is going to invest capital for major improvements if he or she can’t recoup the investment and maybe more ? Perhaps building Federally-financed house complexes, of the row house type built during the past two decades all over Roxbury and Mattapan, will serve; yet strong objections from neighborhood activists are stopping many such proposals, or else are altering their affordability agreements. Not everybody even in the city’s communities of color wants to see more “affordable” housing built in the neighborhood.

My own sense of things is that significant new housing will be built but nowhere near enough to resolve the demand. We had better face it : Boston is “hot,” and the suburbs are not, and being “hot” means enjoying prosperity even if it costs almost more than the enjoyment thereof rewards us. So who will raise the average wages of Boston workers, so that we can all savor the flavor of price boom prosperity that I cannot see any good end to ?

Nor is returning to the cheap price cheap stuff that prevailed in Boston 50 years ago an answer either. Those who decry the building boom and its supply bottlenecks are really telling us that we should become undesirable again. I think not. The building boom must continue; it must expand; it must overpower demand. It must do so within Boston city limits. This is our problem to solve. It is not the suburbs’ problem. Someday the suburbs will face the problem. I do not want that. That would mean that Boston is no longer “hot.”