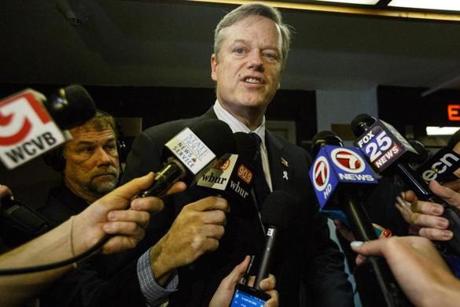 ^ all in for a new mission, of state reform and full social inclusion, for the #MAGOP : Governor Baker takes no prisoners

It looks as though on the evening of April 5th, at the Massachusetts Republican state committee’s (legally required) organizing meeting, a new National CommitteeWoman (“NCW”)  will be elected : State Representative Keiko Orrall of Lakeville. Orrall has long impressed me as the kind of optimistic, embracing politician any political party needs more of — especially a small party, as the #MaGop is. Already, in the three weeks since she announced her candidacy, she has made a  big., big difference : in where the NCW goes and with who she discusses issues that actually matter to most voters.

The Boston Globe today opined that the Governor’s move to take control of the GOP state committee is about c0ontrol merely. Do not believe that. Baker has more in mind than simply calling the shots. He wants the state’s GOP to be a benefit, not an obstacle, to him and to the voters

If in fact Orrall is elected, it will end what, to me, is only Act One of a many-phased reconstitution, in Massachusetts, of a Republican party whose first priorities are ( 1 ) advance useful, practical reforms that a clear majority of our voters can support and ( 2 ) attract candidates who want to make those reforms their campaign agenda.

Notice that I said “attract” candidates, not “recruit.” I prefer candidates who make the decision to seek public office on their own, as do most people who run. Recruiting implies a candidate with some lack of ambition.

If this custom is ever to be altered — if candidates well liked enough in their chosen district to actually have a serious likelihood of winning are to choose running as a Republican — ambitious well liked locals have to calculate that being a  Republican is not the mark of Cain. For almost all ambitious Massachusetts office seekers, the national GOP is Cain plus outrage. Yet Governor Baker, by his reform agenda and with his determination to build a local GOP in his reform image, has given the #MaGop a voice of its own. If Tip O’Neill was right when he famously said “all politics is local,” then Baker’s party-building has opportunity to succeed.

If this success is to be grasped, I recommend the following tasks :

( 1 ) move as many of the Baker team’s young, new to government staff onto town and city committees, where their practical approach can reshape the discussion so that actual public policy matters are debated, maybe even in public Forums.

( 2 ) schedule issues Forums at which Baker’s team members and legislators discuss public policy matters and engage the audience in question and answer. Hold most of these in the cities, where the bulk of activist voters live.

( 3 ) do not pressure candidates to adhere to the state party platform, even as (hopefully) drastically re-written by the state committee after April 5th. Every district has its own voice, its own priorities. A winning candidate has to advance these, not somewhere else’s.

( 4 ) build an actual precinct by precinct, canvassing ground game organization for the Baker – Polito re-election in 2018, starting as soon as possible. Do not limit precinct organizations to registered Republicans. Any voter who is committed to the Baker agenda is, and must be, a potential Baker – Polito precinct leader.

( 5 ) spend ,much of 2019 assembling GOP town committee and city committee slates to challenge, if need be, sitting GOP town and ward committees that did not perform the campaign work needed by a winning organization. No one has a vested right to be a ward or town committee member. You’re supposed to earn it by doing effective campaign w0rk and/or being a locally influential leader.

( 6 ) ignore the national GOP as much as possible. It is dominated by super PACs and billionaire donors with often  idiosyncratic agendas. Fortunately, these rarely engage in a Massachusetts election because they know their agenda or candidates can’t win, so why spend the money ? Which means that team Baker is free to impose ITS voice, its agenda, its political style, upon the very small #MaGop that it is trying to enlarge.

Will any of this be tried ? If attempted, can any of it succeed ? I have no idea. Political missions depend upon the voters. But I do know this : what Baker is trying  — and what I am suggesting he follow up with — has an opportunity to change the conversation really, really significantly. Even many Democrats want it to happen. They tell me this constantly. Why not ? Most activists want government to be effective and imaginative. Most activists want to advance the best policies, no matter which party or office holder advocates them. And given that 53 percent of Massachusetts voters belong to neither political party, activists are right to entertain good policy wherever in our state it arises.

Let us see what those with the opportunity in their hands can make of it.