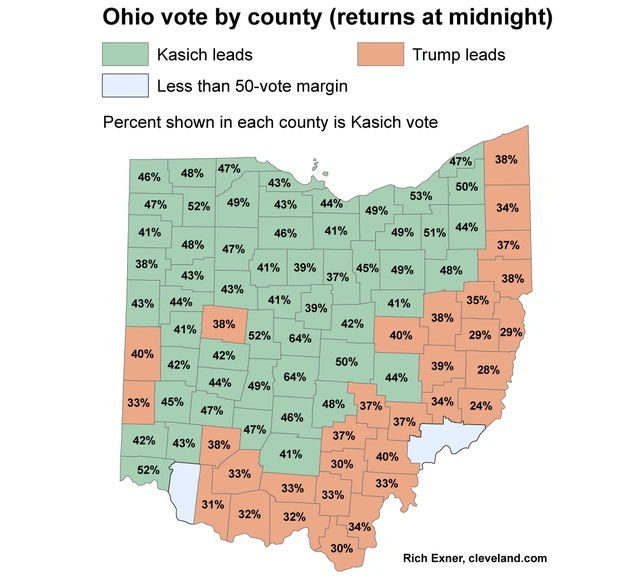 Last night Governor Kasich won his home state of Ohio’s GOP primary by 11.2 %, a margin of 229,000 votes. It was a great victory for the GOP’s most experienced Presidential candidate, who polls by far the best, against Hillary Clinton, of the three remaining hopefuls.

So much for the obvious news from a state without which no Republican has ever won the White House. what I ant to examine in this op-ed is the message in the vote : its location, its sha0pe, its achievement.

First, the achievement : Kasich had the full support of Ohio’s Republican party, which for over a century has been perhaps the best organized state apparatus in the nation; and it assembled for him a ground game that got its vote to the polls, big time. Even in the urban counties, which tend Democratic, more people voted in the Republican primary. (Only Cleveland’s Cuyahoga County produced a fall short vote total.) In many counties, Kasich’s ground game people delivered enormous win margins, as high as 64 percent (to Trump’s 21-22 percent), and the bigger the margin, the greater the total votes cast.  This is how a “GOTV” is done. ID your vote, and get it to the polls. In this effort, there are no short cuts . You do GOTV one voter at a time, all day long, and you need an enormous number of people doing it.

Third, the shape. If you look at the statewide map pictured above, you see that Kasich won almost all of Ohio’s traditionally Republican counties, while Trump won mostly the counties that historically tended Democratic. This is no surprise, given Kasich’s reliance on the Ohio GOP’s organization, which one would expect to be more effective in the more Republican counties, less so in the counties not so GOP. Still, the result highlights what we already know : that Trump’s support really isn’t a fully Republican vote but an independent one and even many votes from Democrats.

From all of the above, one reads a message loud and clear : that Trump can be beaten, and how he can be beaten. Find a solidly grounded candidate whom voters feel they know very well; give him or her a solid ground game; and work the cities. Cities, cities, cities — and their immediate suburbs, in which Kasich also won  big margins last night. It is there, in the cities and their close suburbs, that just such a candidate can beat Trump.

I am hoping that John Kasich will become that candidate. But if he does not become the GOP nominee, there is a candidate who can do everything I said must be done to beat Trump; who has shown that she can do it; and who has all the organization and city base that is needed to do it.