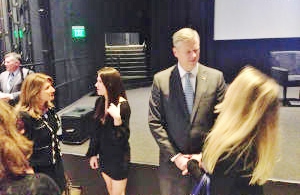 Aggressive in his fight against addiction, Governor Baker has initiated a declaration and a theme : “No stigma for addiction.”  I applaud his determination. Addiction should no more brand a person bad than do diabetes, or chronic bronchitis, arthritis, alcoholism, multiple sclerosis, or depression.

We accept that people afflicted with these burdens incur no social penalty thereby; we are now beginning to add addiction to that list. The entire community appears to recognize that addiction to painkillers and other opiates is not a criminal act; that it’s a matter of health care, including mental health.

Yet one fact obstructs our acceptance of addiction as an illness : the addict becomes addicted, or continues her addiction, by her own act : imbibing the drug to which she is addicted. To those of us who are not addicts, that act looks like a choice, so that addiction becomes a fault. And why should we give empathy to a person who falls into addiction by his own act ?

We are not wrong to ask ; since everybody now knows that use of painkillers, and stronger opiates — heroin especially — can impose addiction, why does anyone take that first step ? That first pill ? That first injection of poison ? is there any young person of today who does not know that injecting heroin into her bloodstream can kill her ? I don’t think there is any such young person. then why does he do it ?

A multitude of reasons come to mind : social pressure, low self esteem, a desire to tempt fate — all of these common to the bravado or the sadness of being young. No one who has read Johann Goethe’s Sorrows of Young Werther, written in the 1770s, should have any doubt that lovelorn youth of all ages can embrace suicide. “I would die for you” is no mere cliche. so why should it be any different for young people today ? Not to suggest that romantic drama is the dominant route to drug use. Escape of all kinds is a mental mechanism almost all of us choose, at some time or other : a land of living dreams : “to the funny farm, where life is beautiful all the time,” in the words of a hit novelty song of the mid 1960s.

Who of us has not wanted, at one time or another, to fly away to a funny farm where life is beautiful all the time ? Unfortunate;ly, the kids who do so by imbibing an opiate often find that they are owned from that moment forward and that getting out of being owned by the drug is almost impossible.

“You either are an addict, or you aren’t,” says my friend Jack Kelly.  Unfortunately, there’s no way of knowing if you are an addict until you imbibe an opiate and find it out — and then it’s too late. You are now possessed by an illness that will always be in you even when, if you are strong enough or lucky enough, you stop feeding the illness and become “clean.”

At this point, we return to Governor Baker’s theme : “no stigma for addiction.” By this mantra we declare that an addict in recovery — an addict clean — is, and has always been, fully part of the entire community with no disqualification on account of her addiction.

But do we live up to the mantra ? Do we in fact treat addicts in recovery the same as we deal with everybody else ? Jack Kelly thinks not. “It’s terribly hard for an addict to get a decent job,” Kelly says. “Once the employer finds out that you’ve done heroin, the job isn’t offered.”

“Addicts in recovery need to know that their strength matters,” says Kelly.  “Employers need to see that all that strength that it takes to become clean, all that energy, is a positive for employment, not an obstacle. And really important jobs, with significant responsibility, almost no one ever gives these to an addict in recovery.”

The mind does start thinking about this. What if the addict relapses ? what if she shoots heroin while on the job ? Steals to support his habit ? What if she injures somebody while driving under drug influence ?

That is how employers think. It’s the same heebie jeebies that prevent employers from giving good jobs to convicts trying to re-enter society. Once a convict, always a convict. You never really stop serving your sentence.

But if addiction is, finally, to no longer be considered a crime, why does the workplace treat them like felons ?

If we really do mean the mantra “no stigma for addiction” — if we don’t just say it because it sounds good — we cannot treat addicts as if their lives will be a worst case scenario. We need to not tattoo the stigma onto their foreheads, not brand them as scarlet letter unemployables. This will be the test of our intentions. All the empathy in the world, all the mental health care and good feedback, won;t mean very much if addicts in recovery make high-level employers forever uncomfortable.