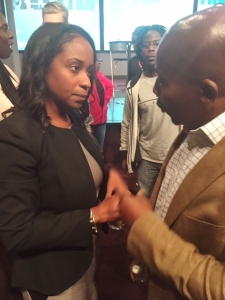 It would be unwise of us at Here and Sphere to not endorse a candidate in the spirited contest going on in Boston’s District 4. There is a temptation to not endorse because the two candidates both demonstrate mastery and eloquence and because I know them both very very well. But voting is about choices, and our choice is Andrea Campbell.

From the evening when I first met Andrea Campbell, last December, and all the way through this campaign, I have seen nothing from her except confidence, humility, dedication, a dogged commitment to do the small stuff every day, and a belief that her District deserves the best she has in her. And she has plenty.

Campbell has brought to her side a diverse cohort of supporters, constructed a campaign run by young, savvy, innovative believers — many of them first timers. She has raised well over $ 100,000, much of it from her connections to Princeton alumni. (disclosure : I too am a Princeton alum and helped connect Campbell to the Princeton alum network.) Some complain that Campbell is “buying” the election, but that’s sour grapes; money raised is raised from people., not space aliens; and elections are about people and their dedication to see  a campaign through to victory.

Campbell has more than matched the dedication of her contributors and volunteers. She has knocked doors every day since first announcing and has, by her own telling, knocked almost 90 percent of the voting doors in District 4’s sprawling reach from Roslindale to Lower Mills to Four Corners and Franklin Field, Ashmont Hill to Fields Corner. That door knocking has proved successful; in the primary, Campbell won 1982 votes, her opponent only 1159. Clearly most voters who met Campbell liked what they heard.

Campbell’s opponent is Charles Yancey, who has held District 4’s Council seat since District council seats were first re-created, by a charter change voted in 1981 and put in place at the 1983 election. Yancey first won election largely on the massive respect given his mother, schools activist Alice Yancey; but he has become a fixture in his won right since, turning back several challengers during his 16 terms and assembling a long list of Council accomplishments. These he talks of at Forum after Forum, with definitive authority. Yancey is by no means missing in action; yet none of it has been enough to turn back Campbell’s campaign.

First, Campbell knows the current issues well; lots of door to door conversations lead almost inevitably to knowing what people want and why. At Forum after Forum, where Yancey talks — masterfully — of past accomplishment, Campbell speaks — persuasively — of future agendas; and elections are about the future, an axiom of politics that incumbents often forget.

Second, if Yancey has a legendary mother to talk about, Campbell has a life story more dramatic, up

from poverty, much of it lived without a father present, and with a twin brother who lost his life to drugs, while Campbell herself achieved it all : Boston Latin School,, Princeton, law school and service as a lawyer in Governor Patrick’s administration. Her life story mirrors that of Dr. Ben Carson, and so does her rise to the top in part because of the odds she, like Dr. Carson, overcame.

Since the primary, Yancey has worked up a far more intense campaign than before it. He has some union endorsements and has had some success painting Campbell as a  supporter of charter schools. Support for charters is a very popular position in the district, the opposite not at all; but when like Yancey you’re behind, you gather support where you can, and this he has done. He’s also found support from a variety of individuals, of many political origins, who seem stunned by Campbell’s rapid rise and not quite sure what it represents. Thus has Yancey assembled a respectable comeback.

Campbell, on her part, has gained the endorsement of Attorney General Maura Healey and of Sheriff Steve Tompkins, who has put his entire team onto the front lines on Campbell’s behalf. Campbell also has endorsements from DotOut, the Ward 17 Democratic Committee, and Progressives.

But more than that, Campbell’s campaign has awakened the entire city and changed this off-year, Council election from ho hum to excited. Her success has had significant effect upon the Citywide Council race, boosting Annissa Essaibi George’s challenge to four incumbents. The two share many of the same endorsements as well as much the same momentum.

I like political enthusiasm. I like it even more when aroused on behalf of new ideas that offer voters prospects better than those they already have. Government should always strive to do better, to engage voters more often, to boost voters’ confidence that their vote matters and can make a difference. Andrea Campbell’s campaign has shown how it’s done. We are proud to endorse her candidacy for Council District 4.

—- Mike Freedberg, for The Editors / Here and Sphere