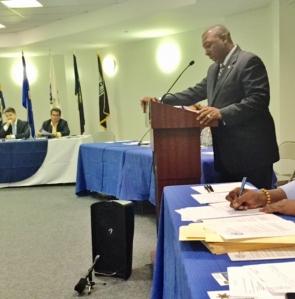 One issue that has stepped back behind the MBTA, DCF, and opioid addiction crises is criminal justice reform. Now, however, this reform must be brought forward.

Specifically, we at Here and Sphere support the following measures :

( 1 ) ending mandatory sentencing. Judges must have discretion, as every case is different. As for non-violent drug crimes, what purpose is served by refusing judges the discretion to take note of the actual facts before him ?

( 2 ) end solitary confinement except for the safety of the prisoner or for documented disciplinary offenses during incarceration. Prison life is hard enough, given the constant restrictions, humiliations,a nd dangers. Adding soliatry confinement tgo a prisoner’s mental stress can drive him to madness and leave him damaged, hardly likely upon release to adjust to freedom and the workplace.

( 3 ) end incarceration for most non-violent drug crimes. Of course this reform pre-supposes a probation staff free of political patronage and a caseload not so large that it cannot be hand led well.

( 4 ) end the system of using inmate labor at pay less than  the minimum wage. Why should a prisoner be denied the value of his or her labor ? Not to mention the unfair competition this poses for employers.

( 5 ) enforce prison guard work rules including treatment of prisoners. guards who violate the civil rights of prisoners — and worse — should be terminated, no exceptions. Particularly there can be no tolerance at all for guards assaulting or raping prisoners.

( 6 ) monitor and enforce the rights of prisoners in need of medication to receive said medication as rapidly as feasible. Any prison official who ignores a prisoner’s call for medical attention should be vigorously disciplined.

( 6 ) prisoners scheduled for re-entry in six months or less should have available to them a re-entry course, of education, job training, and psychological support, so that on re-entry day he or she is ready to tackle the challenges of freedom.

( 7 ) enforce the rules of court governing criminal trials, so that prosecutors and their experts either make available all exculpatory evidence to defense, and rapidly, or face disciplinary action by the Board of barf Overseers. We simply can NOT allow potential innocent defendants to be wrongly convicted based on prosecutorial manipulation. The more than two-year Aisling McCarthy case also violates principles of speedy trial guaranteed in the Constitution.

( 8 ) women prisoners should have other incarceration options than the horrific Framingham correctional facility. Women prisoners face situations unlike men’s. Pregnancy and motherhood, during incarceration, are a fact and call for conditions of custody that will accommodate the demands thereof.

( 9 ) trans gender prisoners must be accommodated to incarceration that will not put their safety and mental health at risk. Incarceration itself is punishment enough, for every prisoner. It should not entail additional dangers and debilities entirely avoidable. Let me add that prisoners who assault or rape other prisoners must be swiftly and assuredly punished and isolated from the general prison population.

( 10 ) re-entry is difficult enough. Released convicts should be able to seek employment unburdened by having their driver’s license suspended because of their conviction. CORI reform has so far fallen short. We have made it easier for a convicted person to “seal” his or her record, yes; but the waiting period thereof is five years after completion of original sentence — parole does not count. A paroled prisoner should have his or her five year waiting period begin on the day of parole (excepting only that if he or she is re-incarcerated due to a parole violation, the waiting period is extended until said prisoner is finally released).

Let us also not forget that incarceration and re-entry affect a far greater percentage of people of color than of Caucasians. I understand that this is a painful fact to read again and again, but fact it is.

I am quite sure that the above list does not cover every convicted person’s common sense fairness requests, but these do offer a start. Bills to accomplish much of what we suggest have been filed and await action by the House and Senate. They should wait no longer.