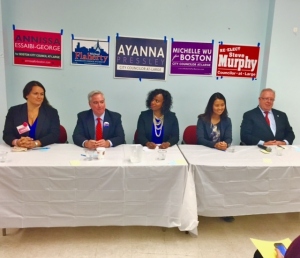 Last week I posted that we at Here and Sphere were not going to endorse anyone, because I know all the candidates well, have advised two, and am therefore not an objective observer. Yet it would be unfair to our readers to beg off entirely. Therefore I will now post our recommendations.

Before I do that, you may want to examine the money facts. Here, from the State’s campaign reporting website, are each candidate’s ending balances and money amounts raised since September First :

Money isn’t the entire picture, but donations do message the level of confidence that people who are wiling to part with dollars have in the candidate they give to, or in his or her prospects — which amounts largely to the same thing. My assessment of the five at Large candidates was formed, for this editorial, before I researched their fundraising. That the fundraising facts mirror my assessment tells me that I’m not completely crazy making the evaluations you are about to read.

Boston elects four at-large Councillors. Five are running in this election. Of the five, two stand out : Mike Flaherty and Annissa Essaibi George. You ought to give them two of your four votes.

Mike Flaherty has a command of City administration quite extraordinary. His grasp of what the City does, and how, he has brought to every neighborhood and its voters, even handed, favoring none, respecting all, and ready to assist all neighborhoods (and social interest groups too) with the kind of enthusiasm that assures all that he gets it and enjoys following through. It’s also a big plus, as far as I am concerned, that Flaherty enjoys a solid political relationship with Governor Baker at a time when State administration reform extends significantly into Boston.

Annissa Essaibi George brings to the Council two major City interests not really represented : the City’s school teachers, of which she is one, and its small business owners, particularly women who own said businesses (and she is that also). George also connects to the City’s new generation of Boston-born activists in a way no other of the five quite does. She speaks neighborhood Boston accent — which is authentically her — yet she’s no stranger to Downtown’s high-income parts, and she also has many routes to Governor Baker’s ear : several of his post-election Transition Team support her. Call her a natural coalition-builder, and you won’t be wrong.

Stephen J. Murphy, Ayanna Pressley, and Michelle Wu : all exhibit strong points, and, as I see it, all have flaws.

Pressley seems the strongest : her successful home rule petition to restore to Boston city control of liquor licenses is a huge achievement for business and social growth, and her current campaign expands upon what she rightly calls “the power of us.” Yet at a recent Forum she came out, in writing no less, for re-instituting rent control in Boston. This is a huge mistake. Rent control was a disaster on all fronts when we tried it in the 1970s. Pressley needs to rethink her position.

Stephen Murphy continues to be the Councillor best positioned to bring old Boston voters into sync with new Boston people, yet he has an ad hoc, gut-reaction approach to issues that sometimes makes one wonder what the blazes he was thinking. Murphy certainly knows City finance; ask him about City capital expenditures or bond issues, and he’ll convince you. He also supports the Council pay raise for the right reason: as other City workers have gotten big pay raises,the Council merits a raise also. If only finance were the sole issue that Councillors have to make sense of…

.Michelle Wu works harder than anyone, has no peer at one on one conversation, and uses social media as shrewdly as any elected person I know. But what, exactly, is her main issue ? I have yet to hear. In addition, her very soft speaking voice makes it difficult, at a Forum, to hear what she is saying, nor does she show a focus. Wu hasn’t yet found her sweet spot in public policy.

If you choose to vote for any two of Murphy, Pressley, and Wu, by all means do so. But vote for Mike Flaherty and Annissa Essaibi George first.