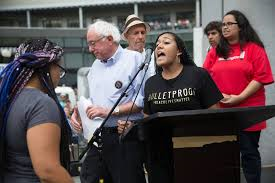 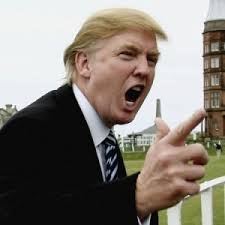 Anarchy need not be a thousand bomb tossers. One person amok can be anarchy. Thus it is that American politics today finds itself beset by anarchy from both directions, the right and the left.

On the left we find the more traditional events of anarchy ; disrupters, highway blockers, internet trolls attacking each other and their soi-disant allies. (Did they really disrupt Bernie Sanders, their most likely defender ? It looks as if they did.) These we’re familiar with. We are accustomed to code pink, to Greenpeace kayaks, to animal rights activists attacking wearers of fur. The older of us may recall anti-war protesters blocking railways, pouring blood on Pentagon files, etc.

Why the left’s anarchists do what they do, who can say. Certainly they do not do it to grow support for their cause — just the opposite ensues. My take is that they do it because it makes them feel good. It really is all about them. Fifty years of encounter with anarchy from the left has matured our response : we now dismiss it as what it is — “all about me” — and continue to supporting the reforms that the anarchists claim to act on behalf of.

Whichever the case, the work of reformers goes on, bit by bit, step by step, as it has to in a society complex and diverse, with all kinds of competing interests to be challenged, persuaded, assembled, compromised with. Reform on Beacon Hill this year is a case study in how it’s done when all responsible parties accept responsibility for acting responsibly on time.

Anarchy from the right, we’re not so sure of. We’ve yet to craft a response to the loud-mouthing, the bullying, the libertine barfing that has struck.

I refer of course to Trump. What else is his vomit of hate, his spit of insults, his upchuck of bluster, if not anarchy ?

Anarchists can act alone, and do. One anarchist’s bullets started World War I. Today we see them as terrorists; but the line between terror and anarchy is one of degree, not kind. The behavior of Trump is anarchy, and because it is words, not bullets or highway blocking, it isn’t criminal and so cloaks itself in civil rights protections whose principle it contemns.

The bluster anarchy of Trump also draws support. Where the criminal anarchy of the left alienates, the puffery of Trump allows everyone with grievance diarrhea to take a very loud dump. And who of us doesn’t have a grievance ? Being aggrieved is a common thing, an OK state of mind.

Unfortunately for Trump, grievances don ‘t line up neatly. Your grievance is not my grievance. And what of those of us who don;’t give in to grievance, who accept that things do not always go our way when we want them to ? Very likely we find Trump’s gripe dumps a ludicrous or distasteful bother.

And so it would be; Trump anarchy would get pushed aside as readily as the left’s disruptions and highway blockings, except for one inconvenient fact : grievance has become the norm for the GOP onto which Trump is dumping. If you are Republican, Trump dump is simply a livid phase of what you already are.

We can dismiss leftist anarchy because it is not us. It is harder to cast aside anarchy that is us. To do that, we have to start taking a hard look at who we are, we the Republicans who have allowed grievance to become our dictator. If Republicans cannot make that step — cannot move from blaming others to blaming themselves — Trump anarchy will continue to befoul Republican thinking and render it almost impossible for the party to win a majority.

Yet the opportunity is there. Republican candidates need — in a hurry — to overwhelm Trump anarchy with positive politics that exchanges grievance for growth, insult for ideals, vulgarity for vision. You can’t defeat grievance by embracing it. Instead of repealing President Obama, the party should improve upon his reforms — and there is much about them. Instead of vilifying government, Republicans should offer ways to make it do a better job — and there is much in the Obama record that needs a better doing. Instead of imposing angry religion upon voters, Republicans should free voters from being dictated to.

Were the Republican party to do this, it would make Trump even angrier and more an anarchist than ever; but it would also render him ever more alone, an insult tosser generating the kind of shrug we have learned to give to anarchists of the left. Will it happen ? I am skeptical — but very willing to be proved wrong.