Yesterday, after signing into law an expansion of the Earned Income Tax Credit that he had made a centerpiece of his campaign, Governor Baker headed to Worcester, joined by his Lieutenant Governor, Karyn Polito, for whom, as a resident of the region, Worcester issues are a special responsibility.

There Baker announced that the state’s capital projects fund — known as MassWorks — would allocate $ 75 million — a fifty percent increase from last year’s contribution — to downtown Worcester’s City Square project, a major development which includes the following projects, as reported last December by MassLive. I quote the details :

“The city’s Planning Board Wednesday unanimously approved plans for the construction of 370 new apartment units as well as retail space as part of the CitySquare project — a $563 million multi-phased private/public commercial real estate project which aims to create a vibrant, pedestrian-friendly center in downtown Worcester.…the plan consists of two five-story apartment buildings — one with 239 units and the other with 131 units. A 479-space parking garage and 12,000 square feet of retail space will also be included in the project..

Spreading the huge wealth that is the “Boston boom” out to Massachusetts’ “Gateway” cities became a priority for several of last year’s Governor hopefuls. Baker said the same and by picking a running mate from the immediate Worcester metro area, he signaled that his commitment to Worcester development would be personal. Thus it was hardly a surprise to hear Baker say, yesterday, about City Square, that “We are going to continue to make that program the centerpiece in a lot of our activity in terms of public private partnerships and state and local partnerships. We are also going to expand that program to do more with it.”

Lieutenant Governor Polito sounded an even bolder note of the same  song : “…a reimagining of what downtown Worcester could be” by Murray and other Worcester leaders…Often time plans in government sit on a shelf. It takes real leadership and imagination to make those plans happen.” 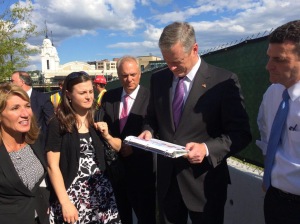 Very similar statements were made in Boston, during the debater about the 2024 Games Bid, by Mayor Walsh and Bid chairman Steve Pagliuca, as well as by the Bid’s many, many supporters. In Worcester, talk, of “re-imagining downtown” elicited praise and thank-you’s. In Boston, many were angered by it. Little wonder that whereas Baker held the Games Bid at arms length, he has gone all in for Worcester.

Boston’s loss may well be Worcester’s gain. There is only so much business to go around. Businesses that almost certainly would have rushed to Boston’s Olympics Plan, like iron filings to a magnet, had the Bid become a fact, doing so despite the density of the City and all the inconveniences arising therefrom, may now opt for Worcester, bringing their investments and jobs to that city;. After all, if one city wants you badly, and another city maybe doesn’t., where will you go ?

If you’re in the innovation game — business, education, social living — and there’s two cities to choose from, one that welcomes you and one that maybe looks upon innovation as a difficulty, you’re likely to choose the city that wants all the innovation you can bring it. Granted that Boston currently enjoys a banquet of innovation, a feast of construction, a fiesta of change that will almost certainly transform everything we are; but that is how things look now. It need not always be. Forty years ago nobody wanted anything to do with Boston; people moved out as soon as they could. Then the cycle turned. It can turn again.

Worcester enjoys ready access to Interstate routes. Its house prices run 50 to 75 percent cheaper than those in Boston — rents, too. Worcester also has many colleges. None enjoys the world fame of Harvard or MIT, but Holy Cross and Clark University, to name two, do quite well, thank you. Traffic in and around Worcester moves much more smoothly than it does in the Boston region. Worcester even has its share of superb restaurants, as anyone who dines on “restaurant row” of Shrewsbury Street will confirm. It’s a city ready to rise.

Worcester has leadership in place from local to  Beacon Hill and a civic sentiment that “it’s now our turn to shine.” Boston innovators and political leaders — chastened, perhaps, by discovering that many Boston people don’t trust “transformation” — should not assume that we will always have the boom game to ourselves.