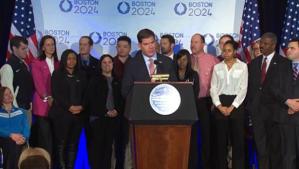 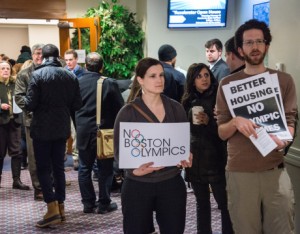 ^ Mayor Walsh and 1000s of volunteers versus “the same five people” should be a no-brainer. We’ll soon find out IF.

Immediately after I wrote my most recent article concerning Boston’s 2024 Olympic Games bid, a new WBUR poll appeared in which support for hosting the games moved up slightly from the previous poll showing support in negative territory. Support continues in negative territory, but the current Plan’s decision to use venues in the state’s gateway cities appears to have helped. Though opposition leads support, in Boston itself, by 53 to 40, statewide it’s 50 to 40, which means that outside of Boston the number is probably closer to 44 to 40.

That’s still negative; and as the International Olympic Committee (IOC) wants to see positive support for the games showing up in polls by September, the Bid Committee has much work to do, and quickly. Can it accomplish this task ?

Were this a governor campaign, such as last year, a 10 to 13 point deficit would be no big matter. Charlie Baker was down almost 20 points to Martha Coakley in mid-July of 2014; yet by mid September he had overtaken her in polls and stayed ahead all the way to his small but significant win. But this is NOT a Governor campaign.

To turn around the present 10 to 13 point deficit, and move to a five to ten point positive, the Bid Committee would, ordinarily, unleash a statewide media buy of major intensity; would print up brochures and deploy volunteers to canvass voters; would get the editorial boards of the state’s major newspapers fully on board; and, if possible, would win Boston’s Mayor and Governor Baker to back the Bid argument. So far I see no evidence that the Bid Committee is ready to do any of these, or that it has the funds on hand to do it.

Yet I said “ordinarily.” The drive for a positive result in September of this year is not an ordinary circumstance. The actual decision will be done by a voters’ referendum in November 2016. That is when the media and canvassing effort will get going. All that is at stake this September is a poll number, a much more ephemeral thing.

Its ephemerals can easily become substance with just a few — but hugely significant — developments. None of the big influencers have weighed in as yet. The Governor has said nothing; Mayor Walsh supports the bid, but with major reservations (at least formally; in fact many of his team, are working devotedly to win the Bid). The Globe has written positively about the new Bid Plan, but it has yet to say “back the Bid.” The Boston Herald has only recently begun to shift from opposition to support, driven largely by its distaste for the antics of the most visible opponents; its editorial page seems far away, even now, from recommending a Yes.

I say this because while the Olympics currently draw a negative, I don’t believe the public has written its Olympics opinion in stone. This is certainly true outside Boston proper; yet even in Boston, where almost all of the passionate opponents live, hardly anyone you meet talks about the Olympics, and when you raise the subject, almost all say “undecided.”

How could things be other ? People have read — maybe — about the Plan, about its shortcomings, about its complexities and its unsolved conundrums; but people in Boston also like sports, and they are passionate about it. Why has that passion not yet shown up in support for the Bid ? As I see it, most Bid supporters don’t view the Bid as controversial and so aren’t energized to fight for it. The sentiment seems to be, “It’s a great thing, why isn’t it ?” That was certainly the feeling back in January, when the Bid was first widely bruited; and if the opponents have arisen out of nowhere to high fury, the Bid’s supporters have not changed. They liked the Bid then and like it now in about the same way : a good thing but not something to go to war over.

The opposition HAS gone to war. It has way , way overreached, angering the mayor and engaging in tactics both selfish and rude (and seen as such). The opposition’s methods and noise remind many of Tea Party offensiveness; and for very good reason. They’re the same : bogard public meetings, obstruct everything, chant slogans, answer argument with insult, fling ad hominem attacks, harass, distort. (That the Bid Committee has engaged in a kind of BRA design review tactic, by which every neighborhood touched by the Games’ plans feels endangered, hasn’t helped matters.)

How over the top have they gone ? One No-Boston activist calls the games “a disaster” and run by “Scamsters.” Another threatens Court Action (which she has no standing to bring) to stop the Bid Committee’s upgrading of Quincy Point Park, a State-owned acreage much neglected, parts of it in full disrepair.

The public , however, hardly noticed any of this, until Black Lives Matter activists took over Mayor Walsh’s home street at 4 AM one morning, waking up everybody. Though the Black Lives Matter agitators are not NoBoston — and one capable NoBoston advocate has specifically noted the distinction — the demonstrators did not limit themselves to Black Lives Matter issues. They agitated about the Olympics, too. And thereby brought perhaps unwarranted dislike upon the No Boston argument, and in the most attention-getting venue available.

Now everybody notices; and, handed the opportunity, the Mayor has gone on the offensive against NoBoston’s tactics for public meetings, talking (correctly) “the same five people taking over public meetings where people are trying to discuss the details.”

The No-Boston activists would be hard pressed to win a fight with Boston’s popular Mayor even if they were numerous and not confrontational. Flinging ad hominem attacks, slogans, and 4 AM rudeness at him, they have no chance.

Meanwhile, in this context of  quite outlandish opposition by a small few versus a huge body of Boston 2024 volunteers (and more signing up every day), just two specific points move most Bid opposition : the Games must call upon no taxpayer dollars except for infrastructure and security, and no tax breaks should be accorded developers of the Games’ Widett Circle stadium and post-stadium housing proposal. Solve the no-tax issue, and very likely most of the big influencers come aboard the Bid. Solve the tax-break offer, and a significant number of skeptical Bostonians say “”Ok, why not do the Games ?”

The Games Bid can get to Yes in the polls very quickly once the major pieces start falling into place. Will they ? We’ll soon see.

NOTE 07/15/13 — : I have significantly updated the 4 am demonstration at Mayor Walsh’s home portion of this story in  light of reliable information given me.