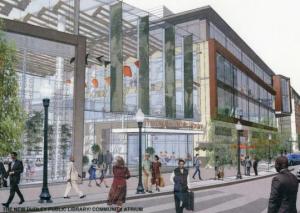 Often, during recent elections, we heard much about “the community.” We heard it again in the recent Boston 2024 donnybrook. People said, “the community wants this” or “it’s not good for the community” and even “the community opposes…” We also became vividly accustomed to the term “community activist.”

This sounds good. Most of us who hear the term “the community” envision it. We see happy neighbors cooking out or attending a local public meeting, or perhaps rooting for a local school baseball team as it squares off against a team from somewhere else. These impressions gain sinew from Boston’s history : the present city is made up of what were once  eight separate towns : Charlestown, South Boston, Noddle Island (East Boston), Dorchester, Hyde Park, Brighton, Roxbury, and Boston itself. And some of these eight themselves encompassed separate sections : Dorchester included Mattapan, Savin Hill, Uphams Corner, “Columbia Point,” Cherry valley, Fields Corner, Port Norfolk, Codman Square, and Lower Mills; Roxbury included Mission Hill, Roxbury Highlands, “Lower Roxbury,” Jamaica Plain, Roslindale, and West Roxbury; Brighton included Allston. And Boston itself broke into North End, West End, Beacon Hill, South End, Back Bay, Bay Village, Chinatown, and Downtown.

Sharp hills galore, and ,many valleys and tidal plains, gave most of these geographic pictures lump and smell, not to mention a position set off from each. And thus geography became the frame for the photos in our community picture book.

But there are at least two major contrary facts that dilute our picture, that render it illusory.

First is that Boston is not simply a puzzle of pieces entirely individual. Hardly anybody who lives within the frame of one “neighborhood” photo spends all his or her time there. Most work elsewhere, many socialize elsewhere or shop elsewhere.

Second is that hardly anybody who lives within this or that picture today will still be living there 20, 30 years from now, or lived there 20, 30 years ago. Most people in America move constantly. Many end up living in five, ten, even twenty different places during their lives. Even long-time residents of this or that “community” move to Florida for retirement. I can’t begin to count the number of “Dorchester people”: I know who were ferociously active as such but who now live elsewhere, returning — if at all — only to visit a pub  or a barber shop or to work a poll on election day. The same is abundantly true of Charlestown, the North End, West Roxbury, and “Southie” — to name just the most self-identified of “old loyalty” communities.

Even died-in-the-woool “Dot Rats” or “Townies” move away without a qualm if there’s a better job out there, or a great price offered for their house, or if they have a child to be closer to, or who want better schools than what they think their Boston “community” has to offer.

Thus even in Boston, with its geographically vivid, pictured frames, “community” is more a vision than a thing, more a dream than a waking. New “neighborhoods’ appear, old ones disappear : today the brand new, still a-building Seaport District is Boston’s loudest burgeoning frame-picture; while the “New York Streets,” once a teeming neighborhood (and its own City Ward), has so disappeared that only attic figs recall it.

“Community” is a convenience. When it loses its convenience, it gets left behind.

I have set all of this forth because too often in Boston today activists raise the “community” slogan as a stop sign : thou shalt not develop Codman Square ! You may NOT “gentrify” Uphams Corner ! One activist whom I often read — and enjoy the company of — talks of building Boston “from the community up.”

It seems to me that by “community” people who use the term express a belief. The evidence for that belief may disappoint, but the belief has its own life. It goes on despite facts. Today I had a longish conversation on twitter with a Codman Square activist who insisted, at first, that Codman Square has “lots of community activity” and that I did not know the neighborhood., I pointed out, as per the first version of this article, that I had made clear that most people who live in a “community:” do not respond thereto. I pointed out that at Codman Square DC meetings, 156 people show up, out of a neighborhood with maybe 5,000 adult residents. The twitter converser then said “that’s why there needs to be all encompassing community action.”

The same Codman Square tweeter also talked of the plight of people she knew who have “lived here for generations.” But that is manifestly untrue. Codman Square in the last 40 years has changed population almost completely, and it is changing again. It exemplifies my point that “community” is a concept ephemeral, in part illusory, and highly subjective to the individual using the term.

I don’t mean to suggest that neighborhood activists cannot give voice to their area of Boston, and draw the City’s attention. They can. Neighborhood activists also provide personality to an area and patronize its eateries — because if you’re going to gather in groups to talk things out, an eatery is a pretty accommodating place to do it. Still, neighborhood activists do best when they work on details rather than the big picture, because the picture is not theirs to draw except in part.

A good example is our friend Chris Kollett, of Roslindale, who describes the “community process thus : “This certainly can be a problem with the community process, esp. when a small group ends up with an outsized voice….Reaching community consensus *can* be messy & problematic at times. But it’s pretty great when communities come together.”

Stability is not how the reality of Boston neighborhoods works, nor can. A big city like Boston is built on commerce, its real estate on prices. For every activist who wants “the community” to decide, there’s six homeowners ready to sell — almost always to someone who does not now live in “the community” and who likely won’t live there 30, 40 years from now. The businesses in a “community” are even more ephemeral. Most don’t last five years; hardly any last. for 40. Their owners go where thew customers are. If they’re “in the community,” fine. If not, then not. And what business, situated in a “neighborhood” rather than center city, relies only on customers who live “in the neighborhood” ? Not very many.

There is, however, one kind of “community” that does stay pretty much the same decade after decade : a dying one, a community with scant commerce and not much income. East Boston was like that in 1970, when my Aunt Liz came back for my Mom’s funeral after living in Cleveland since 1928. She recognized every building and almost every store.

That’s not “Eastie” today, is it ? Today’s East Boston is as vibrant a pass-through as it’;s never been, teeming with development, with newcomers of all kinds and more income than its streets have grasped since JFK’s grandfather ran a saloon on Meridian Street. Nor do the vast changes tidal waving through “Eastie” arise “from the community.” They are brought to nit by investors risking risk capital and crafting plans — just as did William Sumner and his followers when, in the 1830s and for decades after, they created the first East Boston.

That is how “community” is made. By risk capital, by bold seers, by shops and technology hubs willing to chance the future of an area. The more “community” activists impede these risk takers, the surer it is that their “community” will slide away; because change is life, and life is change. Only the dying stand still; only the dead commit to it.

What I have just written is not romantic, and it may not be fair (community and change has nothing to do with concepts like justice); but it is the truth.

As for the various “neighborhoods” of Boston that we love to love, charming and evocative of loyalties, sing them while you can : because unless they decay, they will 20, 30, 40 years hence chant very, very different tunes from the songs they proffer to you now.