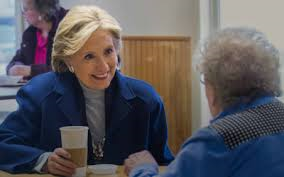 ^ A polarized electorate either reveres or fears a President Clinton — hopefully with good reason.

It’s a commonplace to observe that, today, there is polarization in the American electorate. By “polarization”: I mean that voters, instead of looking to see how can best appeal to most Americans — the strategy of “centrism” — activist voters today advance their own views to the exclusion of other views.

Why does it matter so much ? Why has it had at times such dire consequences ? The answer lies in our Constitution itself. That document did not, create a unitary government such as Great Britain, Germany,and France, for example enjoy. Instead, our Constitution established 14 governments — now 51 — in which local sentiment dominated all but the one central government, which itself was chosen entirely by voters of the other 13 governments.

Because every one of those other governments arise from their own, local, par6yicular sentiments, and not from a national unity, division was thus built into the Constitution as a matter of explicit policy. As a result, parties defeated in one national election retain sufficient power via the other 50 governments to continue re-fighting battles lost, for as long as the losing interests retain that local government power.

This is why today’s polarized electorate matters.

In Great Britain, when the labor Party is defeated — or the Tories — it is defeated nationally and often stays out of power for a long time, until conditions — and thus the entire party — change. The Tory Party of today is in no way that of 1950, or of 1880, or of 1830. The labor Party of today is in no way the party of 1975., or of 1915. Yet in America, because the same political battles have the ability to get fought over and over no matter how many times defeated in one place or another, the two parties look almost precisely the same as in 1896, or 1860, or 1836, with the labels reversed.

Elections work only if the winning policy can defeat the losing policy decisively, conclusively. It is not enough to keep a revolving door revolving, so that one policy gets adopted for a while, only to be replaced by a policy that negates the other. That way, the government accomplishes nothing and becomes a kind of self-defeating obstruction, something unworthy of any serious voter’s allegiance. We are in that position now. We have been in it since 2000.

It would be far better were we to continue moving toward the parliamentary system that both parties have already begun, when the base Senate elections not on local issues but on “control of the Senate.” As un-Constitutional (in the core sense of the word) as that move is, it reflects a felt need that having one election result cancelling out the prior election, only to be itself cancelled by the next, benefits no one. Perhaps if we create a de facto unitary electorate, in which one party can defeat the other nationwide, we can relieve our polity of the locally determined structures of never-ending conflict, leaving to state governments purely state interests, as we in Massachusetts have, for local office, been doing now for 25 years.

Something of the sort seems fully in train right now. We are creating parliamentary government, led by a president who is more a prime ministe5r than not — with the executive authority that a prime minister possesses, far more power than a president has under the Constitution — because we want elections to actually decide things.We want them to get things done.

This is why it matters that we have such a polarized electorate.