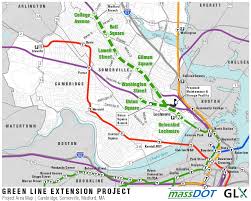 ^ Hallelujah !  route of Green Line Extension to be ready by mid 2020

Two nights ago I attended a meeting in Medford at which community activists discussed the forthcoming Green Line extension with MBTA project managers. What i heard, over the course of almost two hours, was a case study in budget busting. I’m afraid that such busted budgets are a way of life at the “T.” This cannot continue.

Extension of the Green Line, from its current terminus at Lechmere out through Somerville and into Medford, has been on the table for years and years. At the meeting we found out — because I asked; nobody else did — that completion won’t take place until mid-2020. Meanwhile, the entire project is having to undergo environmental reviews of all kinds ; noise, vibration, track bed, bed width, snow fences, station size, exiting and entering, footpath access and crossings, traffic study, train frequency. All were at issue at Wednesday night’s meeting, along with the usual NIMBYism.

Here’s a link to the Green Line Extemsion project in all of its details : http://greenlineextension.eot.state.ma.us/

i cannot imagine how large the bill will be for all these environment studies; the people hired to do them; the equipment; the web-siting; and meetings after meetings, leading — probably — to yet more design reviews, environmental studies, and more meetings. All of it just to get a few miles of much needed rapid transit built.

The MBTA project team had already worked a full day as the meeting began. They called an end to it somewhat after eight o’clock because, as some said, their last trains home left at nine p.m.

I have seen several such MBTA project teams hosting meetings well past their scheduled work hours. Never have I heard even one T project person express frustration, or show anger, at having to go through endless questioning of the most minor points, some of them palpably irrelevant, again and again. I do’;t kow how they manage it. I could not. I don’t have half the patience. Why do we even have such meetings ?

Riders need the T. Taxpayers are being asked to pay for its deficits. Once we decide that building out the T is a public policy priority — and we have — the process should be one, two, three : pick a route, design the track bed and stations, award the contracts and build. I’m betting we could have at least twenty percent of the cost, and at least half the time, if not more. Get it done.

The above example symbolizes the huge political Rue Golderg that is our present T operation, i which a thousand coflictig political intdrests beget tripliaction and quadruplication, lung-emptying time lapses, and a culture of shrug. Why should a T worker be diligent when all around him is slack ? Why should a T economist count his dollars when the process requires illogical expenditures and spendthrift conversations ?

No woder that South Coast rail ca’t get built despite billions spent on plans, studies, and miore studies.

Some transit extensions have failed for uglier reasons. Thirty years ago, addition to the Orange line from Forest Hills to Needham was quietly snuffed, in some part at least, over objections by suburbanites (and others closer in) to granting “those people” rapid transit access to their precious picket fence havens. The same genus of objections infected extension of the Blue Lne to Salem. I heard them voiced. And yes, I can hear quite well.

If only the T could have been built region-wide back in the day, before narrow interests coalesced to stop things in the public interest from happening !

The T exists so that riders can ride it, to work or to home, to the city or out of the city. The T exists because one cannot usuallly walk to where one needs to go, or bike, or park i the City, or catch a Uber ride. It exists for riders, who are also a large part of its taxpayers. The T should be managed by those who act in riders’ interest. As for the noise, the vibrations, the smell of trains, the traffic, well : those are part of the fizz and buzz of inhabiting the City. Please don’t double the cost (and inefficiency) of T projects because you don’t like the hubbub you live in.

The Governor’s proposed Fiscal Control Board will have power to reconfigure every part of T operation, including collecting fares on the Commuter-rail : its cost, its work rules, its bargaining arrangements, its culture, its mission, its accountability. Because the Winter exposed the T’s may weaknesses mercilessly, we have a unique opportunity, politically, to conquer the maelstrom. We should take it. We MUST take it. Those who oppose the Governor’s proposal want things to stay as they are — and some, I think, have a more disingenuous agenda that we cannot allow to gain traction.

But that’s a story for another day — though maybe not at all, if the Governor wins this fight.