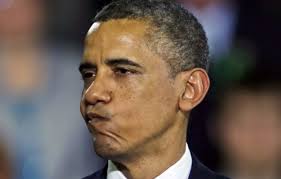 ^ The President is angry. He has a right to be.

We haven’t seen the details of the Trans Pacific partnership accord that President Obama is negotiating. As the details of the accord are listed classified, we can not see them. Nonetheless, we can tell a lot about the accord by the opposition to it : who is opposed, and why. Based on that opposition, we feel pretty confident in supporting the President’s request for authority to “fast track” the accord.

By “fast tarck” it is meant that the accord, once negotiated, can only be voted up or down, as is. The Senate cannot amend.

It was this request by the President that the Senate voted down two days ago. The vote was 52 to 45. Only one Democrat, Tom Carper of Delaware, voted yes. Rejected by his own party, the President had a right to be angry.

Once before we saw this sort of thing debase the Senate. It was a dark day, two years ago when pressure by Republican extremists forced defeat of the Disabilities treaty that Bob Dole fought long and so hard for. Only eight Republicans voted for it; the rest surrendered to crazy outcries from home schoolers.

In the “fast track” case, it is labor unions who drummed down 44 of 45 Democrats. Even the fast-track initiative’s sponslor, Senator Ron Wyden of Oregon, folded — reminding us of how Senator Jerry Moran of Kansas, leading sponsor of the Disabilities Treaty, folded his spine on that dark day two years ago.

The labor union drum, high-hatted by our state’s vocal Senator Warren, is that the new trade treaty will cost millions of American jobs. How do they divine this ? They cite the 1993 North American free trade Agreement (NAFTA), which did result in a dramatic shift of old-line manufacturing jobs away from high-wage America to low-wage nations south of us.

This argument has two parts. We disagree with both. The first argues that because A did X, B, which is of the same genre as A, must also do X. This is nonsense. 22 years later NAFTA, the world of trade and work has transformed. Old line manufacturing jobs no longer lead an economy; indeed, they’re a distraction from the economy that has taken hold and is expanding relentlessly. There aren’t many jobs left to outsource — quite the opposite. Many outsourced indiustries are returning to America for production because today’s US workforce has ar greater competency than that of 1993. As for labor union jobs, today’s can hardly be outsourced or devalued : building trades, service work, government employment. None of these is going to suffer when the Trans Pacific partnership finally becomes agreed to do.

The second argument against “fast track” seems to be that somehow it will create unfair cost competition for American companies seeking to sell to “the rest of the world, 95 percent of the world’s consumers,” as the President puts it. This is merely a circuitous version of the first argument. America conmpanies making manufactured goods have already settled what they saw as labor cost imbalaces.

The opponents simply refuse to accept that the world of work today is dominated by small unit technology enterprise in communication, biomedicine, and education above all; and that these fields know no national boundaries — no boundaries of any kind except for artificial ones erected by governments. China in particular has set up artificial detours to trade in these technology zones, road cones that “TPP” seeks to move aside, so that America technology firms can travel the highways of innovation to the benefit of consumers throughout the TPP zone. (That zone includes Mexico, by the way.)

But we too have barriers to cross border trade. Our laws of trade involve rights and obligations that much of the world has’t yet recognized or adopted.Opponents of “fast track’ seek to defend every jot and tittle of our business laws. The effort is laudable but unrealistic. International conventions on business law and trade regulations are part of the “TPP” and will perforce be part of world wide trade in futuro.

The new global world of techno-work is not one conducive to labor unionization. It’s far too fragmented, rebellious, ornery for the mass teamwork that makes unions effective. Old line unions are having a very hard time adjusting to the new arrangement of economies. They simply do not know how to get from yesterday to tomorrow, and they have a point. But that point cannot command our support. The future of work and trade is already in place and taking over almost every enterprise with economic potential. In big cities like our own Boston, the new economy is a fact to which the rest of the city is now adapting, with some difficulty but adapting all the same. America as a whole needs to follow suit.

Lastly, we reject the idea that NAFTA was all loss. It accelerated economic transformation maybe too quickly, and its consequences caught many by surprise. But even as it destroyed that which could no longer be sustained, it hastened the new world of technology and productivity gains — no decade in 100 years achieved productivity improvements on anything like the same scale.

Thus we come to our decision. The opponents of “fast track’ authority have made the case why that authority should be given to President Obama.