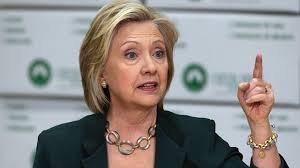 ^ Hillary Clinton : correct on the issues even if corrupt ?

Two days ago I lunched with one of Massachusetts’s major political presences. The conversation turned to electing our next President.

Who will it be ? Why ? On what issues ? All of these questions and more, we discussed. But fairly quickly our talked turned to the negatives : the Republican candidates are too far to the right; Hillary Clinton is the very essence of corruption. We decried having such a subtractive choice.

Unsaid by either of us was the implication that it is crucially important who the president is. But is it ? Of the 44 people who have held the office, not many have been “great.” Quite a few have been mediocre, several miserable. Yet the nation survived.

Still, most of the many Presidents who flunked or merely got by held office long ago, before the world beyond our borders came calling and before the national government had to address an economy (and a population) vastly more complex than what existed in 1789 or even in 1889. Today, it matters greatly that a President not flunk. Presidet Wilson, in 1915, could bungle a war in the Caribbean and screw up a foray into Mexico; George W. Bush, in iraq in 2003-07, bungled huge consequences.

Because so many Presidents, much less mere presidential candidates, have less than greatness in them, the argument for small, innsignificant Washington government has some cogency — though it’s never the argument the small-government people raise. ew of us, however, would want to discard strong Federal protectios and programs on the pretext that a President might be less than msterful. And so we hope, we beg, we insist, that the next President heed a call to greatness, as one President — JFK — once put it.

Against the call to greatness, the corruption in Hillary Cloiton looms larger than a similar corruption loomed in Warren Harding, in 1920, or in U. S. Grant, in the 1870s. Looms also because the Clinton corruption travels a worldwide orbit of mega-deals and sovereign wealth chits.

My friend and I chafe at this prospect. Yet what is the alternative ? A dozen Republicans all lean so far to the right that only a ideological true believer can get aboard; and neither of us is a true believer in anything except the nation as a whole and all of its people, immigrant or not, undocumented or documented, poor or not, of whatever skin color and lifestyle.

For that, there seems to be no true believer candidate except — in words, at least — the Corrupt One.

Corruptly correct on the issues : can you live with that ? I suppose so; but we deaserve better.

These are dark times for the next presidential choice.

Yet there may be a recue. Big business has recently shown, in indiana, that it will take a stand against bigotry and discrimination and that it has the clout to win that battle. It does. Big business has the money and it has millions of employees; it has a worldwide reach and thousands of powerful local reaches. Big business is, perhaps, the single most significant interest abetted by the Constitution and protected therein. The Constitution was written chiefly by a merchant aristocracy to promote and regulate a strong, unified economy.

So : cannot there arise a big business candidate, from the business establishment that values and demands inclusion and openness, that rdecognizes business’s moral responsibilities to us all, that has the power and will to win the battle ?

My riend and I await such a candidate. Until he or she appears and says so, we remain discouraged by having to select among a palette of candidates more likely to embarrass than enhance the national morale, or headed toward flunking the test, not ace-ing it.