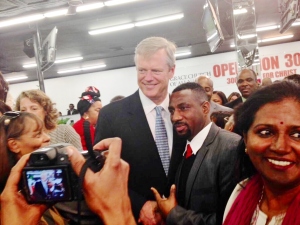 The new CNN poll that finds Governor Baker with a 74 to 8 favorable / unfavorable rating — 64 percenr favorable even in Suffolk County — sends several messages that political activists should heed.

First, being likeable matters. Respecting everyone, whoever he or she may be, matters. Attending to the actual problems of governance matters. Voters elect a goverbor to get things done, and to do the thinghs that a clear majority of voters want. Baker gets that and has made it his signature, just as he did in the campaign. Voters also get that, and are now doing their job of reform : supporting the likeable reformer.

Second, partisan politics must attend to what they are tasked to do : choose candidates for the voters to vote on. The official Democratic party’s spokespeople have criticized Governor baker, a Republican, since day one; criticized the failures, or missteps, that every politician makes (because — surprise ! — even politicians aren’t perfect!) Must a political party always and only oppose, oppose, oppose ? Not that the Republican party’s officials smell any wiser when they address Democratic office holders.

Let the media’s editorialists do the criticizing of ongoing governance. There, it doesn’t taste like special pleading.

Third, Baker has proven to be smartly knowledgeable as well as politically adept. I can’t recall the last Governor who had both, to anything like the degree Baker has shown. Baker can discuss health care issues and state administration with an authority emphasized by the clarity of his addressing. He never talks down to anyone, either. He treats average voters as entitled — and they are — to hear the complexities, to know the difficulties, to think about feasiuble solutions.

Baker has one other attribute worth noting. It’s a gift that he shares with Boston Mayor Marty Walsh : the ability to be a very 1990s-ish, even 1980s-ish guy, almost locally a son of, and at home in the old-line, White-dude world, yet at the same time entirely comfortable with people of color and among gay and even transgender people. And to go among these communities without any self-consciousness about his White-dude persona. It still awes me to listen as Baker — and Walsh — voice, with conviction, the wants and hopes of voters culturally so different from them.

This last is crucial nonpartisanship that allows politics to breathe again, to be useful to all people, to win back the confidence of voters who rightly look upon the usual politician as a liar, or a fraud, or an excluder of all but the party faithful.

I’ve seen many, many politicians who are not at all comfortable campaigning to or among people different from them. One wonders why they enter politics at all. Why not just stay home ?

It’s kind of a miracle that we in Massachusetts have political institutions that enable this level of nonpartisan agenda. We actually have two : ( a ) our municipal elections are not party matters and (b) we have forged what almost amounts to a separate political party for the election of Governor : what I often call the “GoverorGOP.”

Readers of this column know what the “GovernorGOP” is. It’s made up of all those who choose to elect a Governor who is not the Democratic party nominee. as 63 percent of Massachusetts voters are not enrolled as Democrats, the “GovernorGOP” speaks for a clear majority. Many enrolled Democrats also belong, because in Massachusetts almost every political activist is a Democrat; the label means only “I am an activist,’ nothing more. Many of those activists behave like ordinary voters ; they vote for and support the better candidate regardless of label.

It also works because so few Massachusetts voters enroll as Republicans. Supporting the “GovernorGOP”‘s candidate does not empower the Republican party, in a state where the entire legislature has a veto-proof Democratic majority.

What voting for the “GovernorGOP” does mean, though, is supporting reforms that party Democrats either cannot politically advocate or do not choose to, even though a clear majority of ordinary voters insists.

So it is right now. The Governor is moving to transform the administration of our public transportation; to change the culture of state budgeting; to reform the relationship between the state and our 351 cities and towns; to promote economic development and the education and innovation motors that drive it. He has the wind of support at his back, the Speaker of the House at his side (or very good reasons that deserve an op ed of their own), and his own persuasiveness and likeability making it happen.

Ordinary voters want this. They’re being heard; they almost cannot believe it. Talk with them; you’ll hear the difference from how things have sounded these past several years. Voters almost feel it worthwhile to participate again,.

This is why I say that, contrary to all political expectation, Baker’s approval numbers mioght very well go up even further, not down.