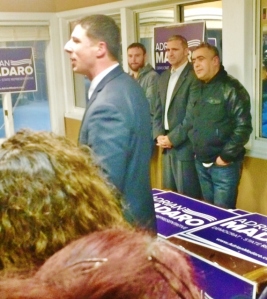 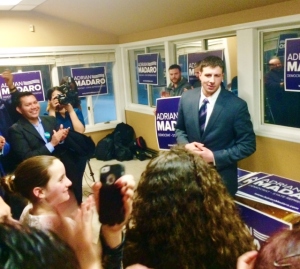 —- —- —- —-
With Carlo Basile — for whom he had been chief of staff — standing behind him, Adrian Madaro, barely 26 years old, celebrated his win in yesterday’s 1st Suffolk State Representative District primary. Even in campaign mode Madaro exults loudly; claiming victory, his voice sounded like a solid object.

“No one can choose our Representative for us,” he megaphoned, alluding to his rival Joe Ruggiero’s endorsement by Mayor Walsh. “Only we can do that !!!”

Someone in the wall to wall crowd at East Boston Yacht Club said, “this is a great night or Carlo !” It was; but Basile calmly waved that sentiment off. “No, no, this is Adrian’s night,” he said, in a voice as quiet as Madaro’s voice flaunts decibels.

Madaro then dove into the crowd, hugging many, shaking hands, embracing and thanking. It was indeed his night. He won 1498 votes to Ruggiero’s 1140 — a solid margin — finishing no lower than second in any of East Boston’s 14 voting precincts. (Of the other three candidates, Ed Deveau — a Beacon Hill staffer for state senatior Anthony Petrucelli — won 570 votres, with Lou Scapicchio and Camilo Hernandez drawing 174 and 173 respectively.) Madaro simply had the goods : he had the Eagle Hill neighborhood, in which he lives and grew up;  and he was known and liked in corners of East Boston peopled by voters new to the neighborhood, voters with whom Ruggiero especially seemed less familiar.

As i observed the campaign, Ruggiero, an Orient Heights Funeral Director not much older than Madaro  seemed not, at first, to have broad support to match Ed Deveau’s, much less Madaro’s. It was a credit to his dogged hard work, likeable personality, and — evident everywhere — the power and hustle of Mayor Walsh and his followers that elevated the rather shy Ruggiero into serious competition. It would be interesting to have seen what more widely known Ed Deveau might have won had he, and not Ruggiero, been Walsh’s endorsee.

But politics is not the arena of might-have-beens. Madaro’s win was a good night indeed for Carlo Basile, who is now Governor Baker’s appointments secretary, and it was a good nght or Baker himself. Unlike Mayor Walsh, Baker did not lead the charge for a candidate; yet there was no doubt in anyone’s mind that Madaro was Baker’s guy. On primary day the local forces of Team Baker knocked doors, drove voters to the polls, did what it took to get Madaro the win.

As with most wins, Madaro’s was a coalition effort. Joining Team Baker were Mike Lake, who ran for Lieutenant Governor in last year’s Democratic primary, many supporters of 2013 Mayoral candidate John Connolly, and almost the entirety of East Boston’s non-union Progressives. Overall, however, it was Team Madaro’s entirely new generation of activists, a hundred of them : younger siblings of the millenials — who are no longer the new kids on the block. 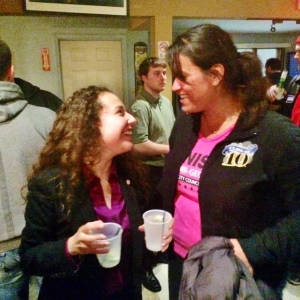 The campaign is not over. On March 31st Madaro faces independent candidate Joanne Pomodoro, whose expressed views — conservative and almost Tea party — on key issues differ entirely from his.