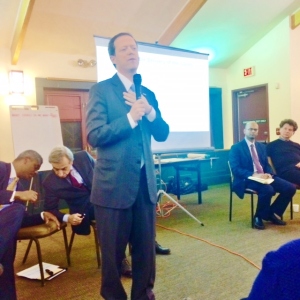 Last night it was the Franklin Park Coalition’s turn to discover just how much time can be wasted at a public meeting called to discuss important matters.

The matters at hand were the Boston 2024 Olympics Committee’s plans for games in Franklin Park. There will be two : equestrian games and a stadium game. This muchh we lerned, and that the committee will construct a permanent swimming pool on site at White Stadium, which it plans also to renovate. (White stadium sits at the northwest corner of the Park and has for a long time hosted High School sports events.)

The presentation of these plans had not finished before some in the approximately 125 people on hand were interrupting. When at last the committee architect was allowed to complete his talk, and public comment began, it was off to the races with what the interrupters really wanted to discuss not Franklin park at all, just the same old same old comp;laints about funding and costs, profits and priorities that those who aggressively oppose Boston hosting the games complain about at every public Boston 2024 meeting so far.

At first the 2024 committee’s CEO, Rich Davey, attempted to respond; but soon he realized that to respond was to inflame; so he moved to mute, listened to each rant, then moved on to the next one.

I saw frustration in his eyes and anger, too, and I can’t blame him. He and fellow committee members had taken time, at night, to address a meeting of people interested in Park issues, and the same was true of the coalition’s leaders (Corey Allen and Christine Poff) and the architect working on Park renovation. Itead of a fruitful discussion about those issues they met ambush.

Not everyone at the Franklin Park golf house felt that way. Many people vocally supported bringing the games to Boston. Yet few supporters spoke to Franklin Park matters.

The ambush constituency did stress one argument that deserves response because it seems so symptomatic of their view, that any argument, no matter how refutable, will do if it helps to sidetrack the Games. The argument I refer to is the claim, made by some, that Frederick Law Olmstead, who designed the Park well over 120 years ago, intended it for quiet walking and peaceful meadows, not for Olympic games.

Think about that or a minute. We are supposed, so it is claimed, to do according to the will of a man who died before any of us now living was born.

As if the Park were not a living thing, to be used by living people according to our own needs of it !

No “community meetings” were held to approve these concerts, nor did anyone complain of it. The producer simply got his permit from city hall, bought an insurance policy, hired security and — boom ! the concerts took place.

Can there any doubt, after last night’s show, that the “community meetings” being held all over Boston to discuss the Games are the biggest wate of time and space since port-a-potties were left stinking on Boston common after marijuana smoke-ins a few years ago ?

The small group of organized no-Games extremists is not interested in discussion or information, they’re only about disruption, distraction, and rant. They’re also highly unrepresentative. Franklin park sits in the heart of Boston’s black community, yet by far the majority of those in attendance last night were Caucasian and mostly from Jamaica Plain, on the other side of the Park.

The few attendees of color who did ask questions seemed pretty much focused on one goal : that the games engage people of color, hire them for its staff, and bring money into the community. This the Comittee has promised to do and almost certainly will do.