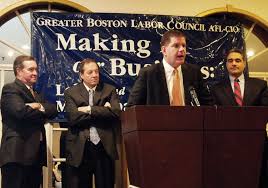 ^ today, no unions better exemplify “doing what the public interest asks: than Boston’s building trades. That’s why they have the political wind at their backs, and deserve what it will win them

As we at Here and Sphere observed way back in 2013, the emergence of Unions as a spearhead political force has divided the Democratic party. The new Union advocacy has also found, in some cases, a foothold in the GOP. This, too, we noted last year. What does it all portend ?

The new aggressiveness by unions arises, I think, from their stubborn adherence to long-standing objectives and agreements at a time when the economy to which unions have accommodated is transforming. The transformation has also had political consequences. Ten to twenty years ago the Democratic party embraced almost all the priorities of organized labor, the GOP almost none. Today that isn’t true.

Labor itself is divided on the issues, and those divisions assure that rank and file unionists vary greatly by union in how much support they give to Democratic candidates. Immigration, for example, has become a priority for the national Democratic party; but many unions oppose immigration reforms. A like divergence exists on two other major issues : schools reform and trade treaties. The Democratic leaadership supports both; the affected unions oppose both. Teachers’ unions align with the GOP on curriculum reform but oppose the GOP on charter school expansion. Building trades and major industrial unions strongly support the Democratic party’s business and government partnership but oppose immigration reform.

On the other hand, the service worker unions (SEIU), who have become the most effective campaigners of all, strongly support most Democratic party initiatives and nothing of the GOP. SEIU locals concentrate on labor’s basics — wage improvement, better benefits and working conditions. They also support pay equity, immigration reform, and women’s health care rights. If 40 to 45 percent of building trades and craft union members now vote GOP, hardly any SEU rank and file does so.

Why the differences ? Curioiusly for a movement that prides itsel on solidarity, unions take the shape of the industry or enterpriuse that they are part of. Industrial unions, utility workers, service employees, teachers unions, firefighters and police patrolmen are, curiously, members of their profession first, unionists second. as the professions they belong to have shifted fortunes, so have the fortunes of the unions within them.

As a result, the wisest choice for policymakers is, as I see it, to address the situations of these professions first. Let each union then adjust its fortunes accordingly.

All professions exist to serve customers. No customers, no enterprise. It follows that no worker is entitled to his or her job. If a particular job doesn’t benefit the customer, it can’t be allowed to continue. It must change.

The smartest unions are those that actively abet their profession meeting customer demand. Right now, in Boston, the unions doing the best by that measure are the building trades, whose strong support for the Boston building boom — and for the City’s 2024 Olympics bid as well as gas pipeline expansion — aligns powerfully with what investors want because the public wants them too.

Great credit goes to Mayor Walsh for moving the building trades unions (and himself) away from bad support decisions made in the 2014  election into an entrepreneurial partnership that can only benefit both parties as it brings progress to the entire City. It is easy — or should be easy — or policy makers to support high wages for workers who commit to voters’ priorities. Is this not exactly what wde as a society want from workers ? That they make what we want to have and do it effectively and gladly ?

Service workers — including hotel and hospitality employees and those who work at fast food businesses — also make a compelling case for the much higher hourly wage they’re now seeking. If we don’t accord them a wage high enough for them to not need public assistance, we the taxpayerss will have to pay it,. Why should we subsidize the low wage practices of some service businesses ?

Conversely, it is difficult or policy makers to grant the demands of unions working in professions that are changing or need to change. First among these is public schools. They day of the one-size-fits-all school is over ; because the world of work is no longer mass employment, it is fragmented in the extreme, diversely experimental, individual trips into research — not armies of production. Schools must do the same if they’re to graduate young people into this new world of work. teachers must be selected by capability, not seniority, ad by effectiveness first.

Just who becomes a teacher, anyway ? Our society — like all advanced societies — hires teachers to teach what students need to learn. Most teachers get this. Teachets should be the first to call for transformation of our schools. It is in their interest to do so as, and because, it is in the public interest.

Meanwhile, the various labor unions find themselves politically at odds with the new political alignments resulting from the new economic fragmentation, global reach, and experimentalism. Those unions best aligned deserve the strongest support. Those least well aligned need — if they want to regain the public’s support and their own relevance– to be pressured, by all concerned, to shape up.