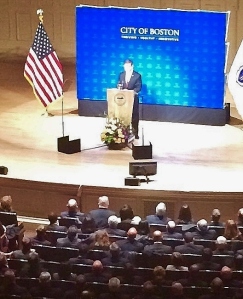 ^ alone in the magnificence of Being Mayor : Marty Walsh talks accomplishment

Last night Marty Walsh spoke his first State of the City speech on a large stage in a large hall illed with a large assembly of people important and very important. Well-dressed people, well fed, beaming, confident and stepping, came to celebrate what was sure to be a speech of afirmation and high spirits — including their own. They were not disappointed, not in themsleves and certainly not by the speech spoken at them by Mayor Walsh.

With his family seated in the front row left and the City Council seated to the front row right, and with Lieutenant Governor Karyn Polito directly in front — the Governor had to cancel, afflicted by seriously flu-like pains — and, in the row behind her, soon to be sworn in AG Maura Healey and Treasurer Deb Goldberg, Walsh could be forgiven for feeling his oats and saying so. 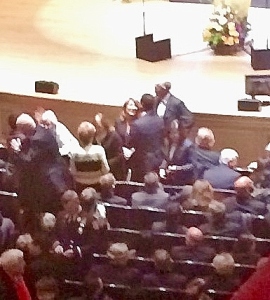 It has certainly been his year. Even as he said, “I’m the same guy from the neighborhood of Dorchester,” he was, on the Boston Symphony hall stage, not the same guy at all. Applauded by easily 1500 people of great sighificance, he was The Mayor. Mayor of a very significant city that is basking in the milk of very good times.

So what did The Mayor of a Very Significant City say ? He talked of his accomplishments, a long list : the most diverse Mayor’s cabinet ever, the most dive5s4 Poloice department ever, two major city worker union contracts accomplished; the most technologically advanced mayor’s office ever, the smoothest permitting process, an administration that has reached out to every corner of every neigborhood; an administration dedicasted tyo btransparency, a school superintendent search involving neighborhood participation as never before. amd so on and on, and all of it quite true.

Boston is booming, the 2024 Olympics loom as a goal well within reach, innovation is everywhere — and will, said The Mayor, be brought to every neighborhood — and so is the most ambitious school construction initiative in recent boston history.

Applause bore iup every parapgraph, danced on each sentence, dotted every i and crossed every T of walsh'[s speech. and why not ? the 1500 people on hand are the Walsh army of progress’s boots on the ground. It is they who are staking his claims to the Boston that is not yet but will eventually be : “Walsh-ton.” 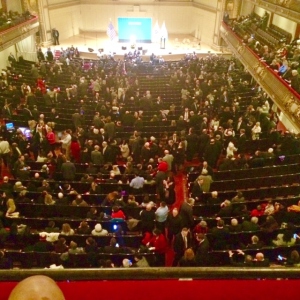 Walsh took the long view. He spoke of 2024, of 2030 — when the City will celebrate its 400th birthday — and of years beyond, decades in which, if all gets done, Boston will be as much Walsh’s as today the city is Mayor Menino’s. Walsh mentioned Menino, as he had to, reverently ; but also as a man whose 20-year reign is a challenge to be matched, maybe surpassed.

The one important year Walsh did not mention is 2017, when he will face re-election. Yet 2017 was much on my mind as I listened to him and was probably first on the minds of most people in Symphony Hall. For them, and likely for Walsh, the evening’s message was “I am powerful, my coffers are full, i have big accomplishments to boast of; you really want to run against me ?”

One could almost hear the war drums beating.

Victory songs will be sung — in the key of Yes.

We are optimists here, and we have very solid, demonstrable reasons to be optimistic.

Not much, therefore, was said about the down notes that Walsh will have to deal with this next year : a budget cut for almost every department; a still contentious Boston 2024 Olympics process; house prices and rents that continue to soar, making city life ever more for the well-heeled only; a school achievement gap doggedly resistent to remedy; school funding that cannot meet all needs; tarnsportation difficulties; the Everett casino, which Walsh is fighting rather pointlessly; housing for the homeless.

Housing indeed, and not just for the homeless, Walsh did mention. He asked the legislature to enact tax breaks or developers of middle-income housing and sales of state-owned land for low income housing.

Walsh will need that from the state and more. He seems well-equipped, diplomatically, to enter the battle. He enjoys excellent relations with Governor Baker, even better relations with Lieutenant Governor Polito, who was his colleague in the legislature. The City’s House and senate delegation is — so far — entirely on board with Walsh’s priorities. Nor could anyone in the hall not feel, hear, and see the powerful symbiosis between Walsh words and what the City’s powers that be want to see happen. But will it ?