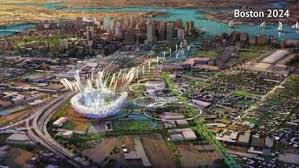 The media wants to make controversy of the bid to bring the 2024 summer Olympics to Boston, but I see no such. opponents there are, but i have yet to hear a single credible reason why our city shouldn’t welcome the games to Boston and all that they are.

Nor am I distracted by the occasional public relations missteps the 2024 Committee may (or may not) have stumbled at. Chiefest of these is the pact by which, evidently, Mayor Walsh agreed that city employees would say nothing negative about the Olympics — a gag order, the media calls it. This was an unfortunate request,m as it allows undecided people to assume that the 2024 Committee has something to hide ; whereas, as it turns out, the mire one learns about the bid, the stronger it proves, and the better one likes it.

The public is now at bat on this. Because of the missteps, some members of the public, including a few inluential activists, doubt the Games presence in Boston. Much will need be done, by the Committee and by Mayor Walsh to convince doubters — about 35 % of voters according to recent polls — that this enterprise is a winner, not a booondoggle.

Last night at the Boston Convention Center, the Committee hosted its first Citizes’ Advisory baord meeting. As I am a member thereof — proudly and honored — i was present, along with at least 400 other members. If I had had any doubts — I did not — that Boston should win the bid, my certainty only solidified upon hearing Committee members Dan O’Connell and John Fish — especially them — explain their plan.

The Plan details, one already knew, even prior to its being publicly released online earlier in the day : no public funds other than for transportation infrastructure, which the City needs in any case, and for security, the funds for which will be furnished by Washington; all games sites within easy walking distance of public transit; the use of college campus dormitories to house athletes; and temporary structures readily recyclable. All of these were patiently explained by the Committee leaders on stage.

What had not been known proved quite revelatory, and exciting, in the fact and in the telling. Without notes at all, O’Connell and Fish set forth a Games and Sites Plan much larger in scope than just the games sites and housing. The two business leaders presented a vision almost as huge as the 1950s Master plan by which Boston and the State reconfigured almost every aspect of the entire city back then, the Plan whose shapes we have lived by these past 60 years. Fish and O’Connell envisioned transportation, accomodation, housing, public venues, and state-wide connectivity, a massive rethink of almost all of Massachusetts inn which the games themselves seem but a small part — albeit the catalyst for it all.

As I see it, this is how the 2024 Boston bid should be made. Because the Games aren’t just an event, they’re an opportunity.

To focus only on the Games is to move one domino on the board of dominoes called “Boston/Massachustts.” move that domino and the other dominoes will fall. But why allow them to fall helter skelter ? Why cannot plan them all, so that we can build the domino board’s future configuration all at once ?

When we were creating Boston’s Coiuncil Districts 32 years ago after charter change was enacted, dozens of interest groups presented plans for their particular district. But I — yes, me — as map aide to Terry McDermott, the Councillor who was tasked to create a plan, prepared an entire, City-wide plan for all nine districts. No one else did that except Councillor Larry DiCara. Is it any wonder that my plan, modfiied by his input, became the plan we elect by now ? You have to thing big about big things, the bigger the surer.

There will be eight more Citizens advisory board meetings, one per month, in eight different Boston neighborhoods. You should try to attend at least one. You’ll be inspired by Reverend Jeff Brown of 12th Baptist Church, charmed by the Committee’s athletes, gladdened by the prospect of our sports City hosting the biggest sport event in the world. 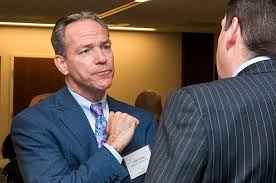 ^ Suffolk Construction’s john Fish spoke with persuasive authority and vast vision : exactly as this Plan should be conceived as

Can I also say that you will be stunned by how authoritatively Fish and O’Connell explain the 2024 bid, the plan, and every pat thereof ? Listen to fish and O’Connell, and you’ll know why they are two of Boston’s most successful entrepreneurs. You’ll also discover that great entrepreneurs are terrific social, civic, and community leaders as well. we are sometimes tempted to think of big business as evil annd of wealthy businessmen as selfish autocrats. John Fish, of Suffolk Construction, and Dan O’Connell, of Suffolk Downs, showed me last night that they’re the exact opposite of such misimpressions.

Doubtless, ish and O’Connell see good financial opportunity from Boston hosting the 2024 games. Is that a negative ? To me it’s a positive. For the 2024 games mean a huge infusion of commerce for the entire region, many construction jobs, and all the excited noise and hurry one wants to feel going on in an A-list city.

And as the saying goes : “if you want to get rich, make everyone your partner.” I’m good with that.