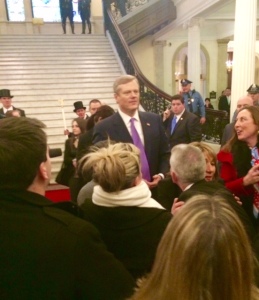 ^ newly sworn in, Charlie Baker is greeted by well wishers — but already looks worried about the task ahead

—- —- —– —–
The Inaugural festivities over, the forceful and bold speeches spoken, Governor Charlie Baker and his team now turn their attention to finding the $ 500 million that most students of Massachusetts’s state budget assert is the size — at least — of the 2015 Fiscal year budget.

I say ‘at least” because the Massachusetts Taxpayer’s Foundation finds the potential deficit even larger. Looking at ten categories of revenue and spending, the MTA tallies a deficit of $ 813 million : $ 288 million in revenue shortfall (predicted revenue less actual receipts) and $ 525 million of overspending : actual expenditures versus amounts allocated in the Final budget as enacted by the legislature.

Here’s a link to the MTA analysis or readers who want to take a closer look :

And this is a,link to the actual Final Budget, enacted as chapter 165 of the acts of 2014:
https://malegislature.gov/Budget/FinalBudget/2015

A deficit of $ 813 million — 2.75 % of the total $ 326 billion FY 2015 budget — is no laughing matter. One allows for estimates of revenue to fall short, because, ater all, no one can predict exactly the future of money. But overspending has nlo such excuse. It’s simply bad governance.

Bad enough it is to budget expenditures that spend every dollar of projected revenues, leaving to chance a potential deficit (and our State Constitution forbids us from operating a deficit budget), rather than leaving a reasonable amount of projected revenue unallocated. A non-allocation fund would be wise, given budget planners’ awareness that Massachusetts has significant, ongoing expense obligation shortfalls : pension liability for State employees being one of the largest. But none was made.

Far worse to overspend the budgeted expenditures — doing so almost guaranteed a budget deficit of significant size. so it turned out.

So what is Governor Baker to do about it ? No one likes a skinflint, yet skinflint baker is goung to have to be. There will be cuts in spending, major cuts. Some are easy enough : millions of state dollars were wasted on implementation of the Health Connector, millions more on incoherent management at the MBTA (Boston area’s public transit). But waste will not make good more than half the $ 500 million, much less the additional $ 313 million foreseen by MTA.

How to make any such cuts, at all, with voters wanting better education (and more of it) ? From expansion of early education to the implementation of diverse school programs, communities will need the state to provide them much more local aid — Baker has already released to the state’s 351 towns and cities $ 100 million of local aid money held back by Governor Patrick as a kind of back-door rainy day fund. He’ll somehow have to find more local aid millions even while trimming other state budget accounts.

Baker has instituted a hiring freeze and ordered every state agency to conduct an in-depth review of its own budget accounts. This is bad news for DCF (Department of families and Children), the troubled social services agency that employs 3309 people and needs many more because its social workers now handle more cases per worker than allowed by their union contract, a caseload directly responsible for several highly publicized child care failures.

How many employees does each state department now have ? Here’s a link to the itemized list :
https://massfinance.state.ma.us/CommonCents/commonEmployeeResult.asp?pg=6

No one is suggesting layoffs. The likelihood is that several departments will need to expand. Yet consolidation of some management offices may well be on the table, and possibly early retirement buyouts. One looks especially at the vast numbers of employees listed in the state university and state college systems. Expenditure practices at state colleges have given rise to scandal quite recently; salaries of top executives seem enormously high — many times what we pay the Governor, for example. Change may be coming to this state account.

The state’s technology will be upgraded enormously. Most of state government still lives in the age of fax and PCs It needs to embrace the age of twitter, laptops, and iPads.

Modernizing the State’s technology will cost money at 8irst but save much more — in time not wasted, bad decisions not made, communication better arranged — than the confused mish-mash we’ve allowed to overwhelm many state services.

A quick look at Budget details turns up one feature that baker is sure to grab hold of : the state’s indebtedness costs. There are five separate indebtedness accounts under the 0699 tab, under which interest and principal is paid annually, plus some technical adjustment amounts. For FY 2015, payments total $ 2,309,436,764.

That’s over two billion dollars that the state shouldn’t need to spend but has to, because in order to fund our enormous public transit and highway costs, we authorized,in the last year alone, borrowing more than $ 12 billion. The new bond issue joined an already existing state indebtedness of an additional $ 12 billion or so.

Baker cannot order this large bond sum paid off in one year, but he can likely ask some additional user fees for highway travel — perhaps road tolls geared to mileage, as some are suggesting — which fees can be used partly to pay down indebtedness and partly to replace the $ 100 million revenue lost to the state when voters at the November election repealed Gas Tax Indexing.

Otherwise, and given the years it will take baker to pay down the state’s costly debt burden, you’d expect him to close the $ 500 to $ 813 million deficit by asking some departments to spend less. Managers will have to trim, line employees to economize, all workers to seek efficiency wherever feasible. Looking at the various department budgets, it’s not immediately clear which ones will have to shorten sail : perhaps the various Court, Legal services, and probation systems, which together cost about $ 737 million, will be a place to look. Education costs the state much, much more, but as everybody wants schooling expanded, this budget will likely expand as well.

Perhaps the state will receive additional Federal funds. The current budget shows Washington paying us $ 9,449,454,682. No wonder baker has met with President Obama and will likely do so again, and again.

Whatever happens will have to happen even as Baker forces state agencies to deliver innovative services to the public with greater effectiveness than the norm of now.

The rubric will be “do more with less, and do it better.”

I have scant idea how Baker will get that done; but get it done, he will. Whatever your view is, right now, of Massachusetts state administration, it’s going to be very out of date, compared to what will actually be, well before the 2018 election at which the voters will judge Baker’s record.

Count on it.
—- Mike Freedberg / Here and Sphere