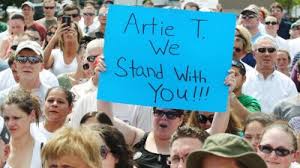 ^ workers and customers of Market Basket, united for a cause that is all of us

Today we pay our respects to those who work for wages, doing jobs for a boss, by a schedule set by the boss, under rules established by the boss, day after day and, hopefully, year after year.

We honor those who take pride in their work even though many a boss takes no pride in thrm.

Little do we realize the boredom lived by those who work at jobs to provide us goods and services. We take the courtesies of sales staff for granted, as if no effort were out into being gracious to a hundred strangers every day, many of these strangers quite rude. We do not see, in the lightbulbs we buy, or the touys, or the clothing, or the laptop accessories and auto parts, the tired hands, bleary eyes, exhausted legs of those who assemble these things we buy without thinking.

We honor those who work and also who spend; becayse it is the paychecks of workers, mostly, that make up the “consumer spending” that provides s of oyr ENTIRE national economy.

Were it not for the unions that workers have formed — to unify each with each, that;s what “union” means — most such workers would live at the utter mercy of employers, many of them completely indifferent to their employees’ lives. Unions have won significant wages for workers, benefits, some job security, some dignity, some peace of mind. Unions have allowed workers to become discretionary spenders; to buy the goods and services which they make as employees and thus to provide us with jobs too.

Thus we see that by honoring workers and their unions, we are honoring waht they give to us as well as what they gain for themselves. Becaue we are all in this together — in this grand expeeiment in social progress and bettering of life that is the American dream. United we may not all be, or always. but even when we differ, we owe our ability to differ without disastrous life consequences to those who work and unify for the sake of a fair workplace and a better life.

And this year, how can we not honor the workers and customers of Market Basket who have stood strong and proudly for the loyalty shown by boss to workers and workers to boss ? For the partnership in success that Arthur T gives to his workers / for the low prices he accords the community ? Sometimes the ideal does work : fair excahnge between boss and workers. It works at Market basket, and we honor it by writing of it — and by shopping at the Market Basket store.