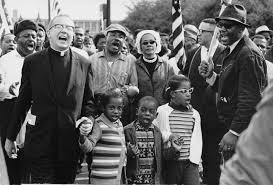 ^ marching to Selma, Alabama, in 1963 — a Civil Rights battle that we thought we had won…

As Robert Reich recently pointed out on his daily blog, schools in America now show greater racial segregation than at any time since the historic Brown v. Board of Education decision was enforced back in the 1950s.

And as we all recently saw fully displayed in Ferguson, Missouri, many police departments view people of color, who they are supposed to protect, as a threat and treat them as such. e have seen elsewhere too that some police and some communities feel that killing a Black person is OK.

Now comes news, via the New York times, that the State of New York will likelyu bsue evans bank of Buffalo for violating the Fair housing Law by “red-lining” — denying mortgagte loans to — neighborhoods of Buffalo in which more than three quarters of that city’s people of color live. A link to the Times story follows:

These were fights which my generation gave time, passiona nd, in some cases, life to ight and win. Now we find, as we age into our 60s and approach being 70 and more, that our life’s work did not succeed; that we won only a temporary reprieve’; that racism continues to hold sway and even increases; that the disease of racism has, like bacteria, developed immunity to the remedies we had devised to attack and kill it.

I admit to feeling very sad to know that my part in this fight has failed; that instead of bequeathing a more just America to my children and grandchildren, i am bequeathing the very same fight that i had hoped to tell them, proudly, that i had helped to win.

I am bequeathing them protest and the need to protest, angrily and passionately because they are protesting things that are wrong and can never be right.

So now, in order that their protests may result in victories more lasting than the ones i thought I had won, I must tell my grandchildren — and you must tell yours — that there is much work to be done, done all over again, work that experience tells us will never be done, work that every generation needs to do and redo because racism in America has not gone away, not at all.

I must tell my grandchildren — and you must tyell yours — that laws may abate racism f0ora time, hut as life changes, so those laws loset their grip and new laws to curb racism must follow.

I must tell my grandchildren — and you must tell yours — that

1. it is NOT OK for banks to treat customers differently becsuse of the color of their skin or their country of origin.

2.it is NOT OK for schools in neighborhoods or communitioes inhabited mosrly by people of color to do with less funding, decrepit school buildiongds,l inexperienced and second-choice teachers.

3.it is NOT OK for police departments to disrespect people of color in the communoties they policve; NOT OK for it to be a crime to be black, to drive while Back, to walk while Black, to enter an ipscale store while black, to cross the street while Black.

I must tell my grandchildren — and you must tell yours — that eveery person who lives in any part of this nation is entitled to respect; to be treated with dognity and courtesy; to prosper and work; to go about his or her daily affairs; to be educated; to borrow money and to openh a business. And I must tell my grandcholdren — and you must tell yours — that they must work to assure that this happens in every corber of our natioon; must pass laws to ensure it; must enforce thosde laws; must teach their children that racism is NOT OK, no part of it; that the bigotry must be eradicated ass surely as smallpox, polio, or bubonic plague have been eradicated from human history.

This is the mission that all of us who fought for justice 50 years ago must recommit to. the fight is not over, not at all; and it MUSt be fought.
—- Mike Freedberg / Here and Sphere