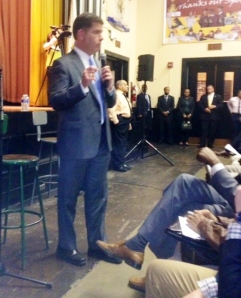 ^ Marty Walsh blames the system, not John O’Brien. in a significant sense, he is right

Mayor Walsh of Boston has been pied pretty good by pundits for what he said about John O’Brien, the now convicted former head of Massachusetts’s Department of probation. Doubtless Walsh wanted simply to defuse the entire matter; to not pick a fight with Speaker DeLeo; and to not throw an old friend from his Dorchester neighborhood under the bus. After all, the Probation department is not a City of Boston matter — of those Walsh has quite enough to handle as it is.

But in any case, neither Walsh’s remarks, nor the questions asked of him by radio emcee Margery Eagan (a Boston Herald columnist) did more than duck the real question, the truly serious question : what specifically went wrong at the Probation department ? Why was O’Brien able to turn the entire Probation staff into his own personal hiring agency ? And pervert it utterly, subvert judges, shove aside probation officers already on the job ? How was O’Brien able to do that ? Why did the legislature — and Governor Patrick — allow him to do that ?

These are the questions that need answering. And there actually is an answer.

it begins, as does so much in Massachusetts public life, with Billy Bulger, who was once President of the State senate, and a,most powerful senate President was he.

Bulger as Senate President had control of the state budget, which originates in the legislature and must be enacted by it. Bulger was also one of the most avid patronage providers. Among the most plum of plum positions are court jobs; and so when Bulger wanted a relative — for there were very many of these — or a supporter appointed to a court job, the judge of that court was told that next year’s budget for his court would be decreased — maybe even that judge’s salary — unless Bulger’s guy got the job.

Some judges balked, and their budgets were cut. Thereafter, judges got the message.

O’Brien thus adopted the Bulger method. He was not Senate President, of course, but he was close friends with the new top power in the legislature : the Speaker of the house. If an O’Brien candidate didn’t get the probation job that O’Brien wanted for him or her, that court’s budget would be cut next year in the House. Legislators knew that O’Brien would get those whom they sponsored hired, and how he would do it; and so the system began, and continued, and worked until it entirely took over the entire probation department’s hiring and promoting.

The conviction of O’Brien and top aide Elisabeth Tavares ends their careers, but it does nothing to reform the legislature’s willingness to use court budgets to bully the state’s courts onto hiring patronage hires. As long as a House Speaker, or a senate President, or both, are willing to bully the state’s judges, probation department hires (and of course clerks of court too) are at the legislature’s mercy.

Granted, that for the near future, the legislature will not dare to bludgeon court judges in this manner for this purpose. But the budget comes up every year, and there is nothing except the public’s memory of outrage to prevent it happening again. And as Mayor Walsh says, it’s part of a legislator’s job to help out his constituents, including helping them find a job. A legislator has a perfect right, maybe even a duty, to write a letter of recommendation for a constituent : government departments do want to know that a job candidate has the ear of a legislator, for state agencies are always needing to communicate with legislators who oversee them. That’s as it should be.

Yet to prevent powerful legislative leaders from abusing their advantage, what can we do / because we ought to something. Myself, I suggest that agency budgets itemize prospective hires (and promotions) for that budget year as a separate budget item, and that that budget item be published, in timely fashion, in every major newspaper and online; and that “job postings” be subject to independent monitoring by a watchdog organization such as Sam Tyler’s Municipal research bureau.

In other words, transparency — the buzzword of this campaign season and a major reform. Transparency won’t eliminate abuses, but it can curb them before they become epidemic.