A man driving around in his car might not make for much of a movie, not unless he’s got a phalanx of baddies armed with uzis blasting away on his ass. That’s not the case in “Locke,” and thankfully so. What “Locke” has going for it is high stakes and Tom Hardy, the actor who has done everything from the violently outlandish “Bronson” to “Tinker Tailor, Soldier Spy” and even played a malevolent cage fighter in “Warrior,” not to mention those small films he did with Christopher Nolan : “Inception” and his indelible turn as Bane in “The Dark Knight Rises.” Hardy’s range and versatility has him on his way to becoming the bonafide A list name from the UK that Jude Law never quite got to. If there was any question, “Locke” cinches it.

The premise is quite simple : a man gets in his car and drives for nearly ninety minutes in crisis management mode. Hardy’s Ivan Locke is a high performing construction foreman building the biggest modern day skyscraper in the London area, into whose BMW bluetooth system panicked calls from a woman, in a hospital and needing his reassurance, keep pouring. He also uses this system, as platform for a calm control over things out of his reach — and as the driving plot device for the film, to let his most loyal know, by direct report, that that he won’t be there tomorrow at 5AM when hundreds of cement trucks will roll in to pour the building’s foundation. This sets off a management shit storm, but Locke, ever calm and confident. diffuses each mini tempest with reason, explanation and solution. What’s not so easy are the calls from his wife, confused as to why he is driving through the night and not home watching the big soccer game with the boys.

The reason Locke is ostensibly ducking out on matters is a big MacGuffin. To say any more would be to cheat the film, but I can tell you this, I never knew that a pour of cement was so complicated, nor had I ever seen a builder so intimately involved in the process. What’s also amazing is the gorgeous, simple, stark cinematography by Haris Zambarloukos. The streak of lights and the illumination and enveloping blackness of night are breathtaking and as much a player in Locke’s lonely emotional journey as is his bluetooth. And not enough can be said of Hardy, pinned behind the wheel the whole time with the camera close in on his face as he talks through some sticky situations, it’s a tour de force performance that you see more on stage than on the scree, and his use of nuance and inflection nails simple emotional ripples, especially when anger masks behind his soothing words.

Director Steven Knight has mainly been a writer to date, with “Easter Promises” and “Dirty Pretty Things” to his credit, but as a man who puts pen to paper to plumb a soul, he gets this character study right both on pad and behind the lens. Shooting off into the unknown to atone is a brave choice not many would make. Locke risks a lot; Hardy and Knight may have risked more. The riches of their gamble shimmer in the cold dark night heading into London, guided by a chill electronic voice of one of Siri’s sisters. This subtle commentary on technology and being wired in is a daft mirror. Not all of “Locke” rings through, but that which rings is very real and leaves much to reflect upon. 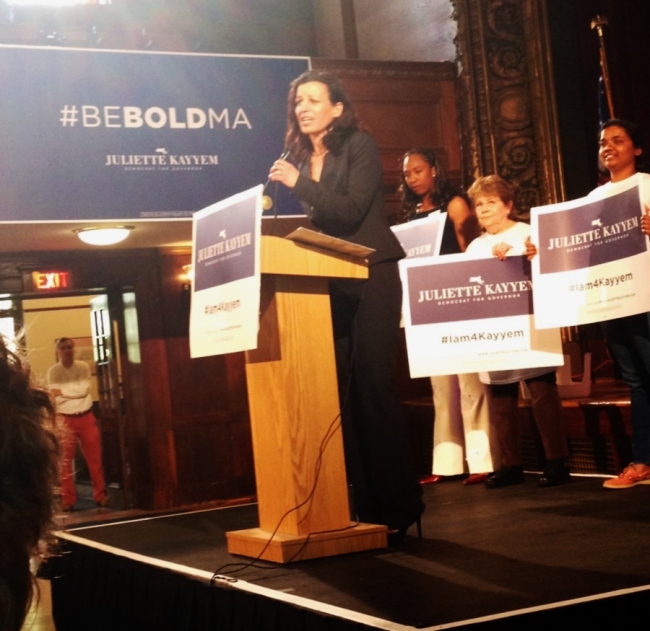 Arlington, MA, May 10, 2014 — Speaking a la stump to about 100 supporters at Arlington Town hall today, Juliette Kayyem spoke loudly of plans, not promises. Eager to distinguish herself from Martha Coakley, and to override Steve Grossman — the two perceived front runners –she exclaimed, in a finger-pointing voice, “nobody DESERVES to be governor ! We can’t just nominate the next in line, this is no time for caution, we have to be bold !”

“We’ve been cautious before,’ she scolded, “and what did it get us ? from 1990 to 2006 we lost every governor election to Republicans, who mostly ran this state into the ground !”

So much for being the first state to enact universal health care (Mitt Romney), the first Massachusetts governor to embrace gay rights (Bill Weld) and to begin the huge clean-up of our state’s rivers and harbors (Weld again). So much for Paul Cellucci and the huge paydays that the “Big Dig” gave to thousands of union construction workers. So much yet again for Bill Weld, re-elected in 1994 by the largest vote margin ever accorded a governor seeking another term.

But if Massachusetts Republicans thought it was they who Kayyem’s “J’accuse” speech had most in mind, they had it wrong. No Republican, not even Charlie Baker, was attacked by Kayyem as fiercely, or in detail,. as Martha Coakley. said Kayyem, “I sat next to Martha Coakley at a Forum and listened as she ducked the question of sex education in early school. ‘mmm, that’s hard,’ Martha said. Well, it isn’t hard ! Not when teen pregnancies are rising, especially in Western Massachusetts !”
Which, of course, is Coakley’s home area.

Kayyem was far from finished. At length she detailed Coakley blocking Governor Patrick’s gun control plans and delaying his moves for CORI reform. And having thus reminded everyone of Coakley’s “caution,” as she called it — I have a less kindly impression of her — Kayyem attached the “caution’ sign to Steve Grossman, whom she dubbed the kind “Beacon Hill insiders who we Democrats nominated and lost every time.” Which he is.

Kayyem was well justified in pointing out the insider and cautious nature of Coakley’s and Grossman’s candidacies and to contrast them with Deval Patrick’s outsider status, as she called it. Massachusetts voters at least since Bill Weld’s election have made very clear their unreadiness to elect Beacon Hill politicians governor, their insistence on governors un-compromised by legislative deals and big-contract administration.

The bold hopeful then delivered “plans, not promises” — a swipe, perhaps, at Don Berwick, who has promised almost everything, and with whose appeal to progressives Kayyem seemed determined to compete. Kayyem detailed plans for criminal justice reform education improvement, increased funding for social services, and — her signature — “better data management,” which she said means updating the entire state government’s technology, interface and transparency.

Of which proposal she claimed, “I am the only candidate to say this !”

It was an impressive speech, a campaign kick-off affair, by a candidate who has worked hard to become as convincing a political voice as she is a policy researcher. “This is not a time for caution ! We must be bold,” she insisted, over and over again…

Will it work ? Will Kayyem’s version of Bold succeed in gaining her a large enough following to challenge the Caution Twins ? It might. But I have doubts it’ll do much more than that. Here’s why :

1.Kayyem is not as clearly outside as she wants voters to see. She’s had a long career as a top-level policy advisor to one president and to Governor Patrick and advised the Bush administration on interrogation issues. The typical — the most credible — Massachusetts outsider candidate for governor comes from the world of business : Deval Patrick and Charlie Baker both, or from the “Governor GOP” party, whose entire existence is a kind of good-government watchdog agency, — and Massachusetts has many venerable.

2.Kayyem seemed at recent Forums to have accepted that she cannot be the candidate of the Democratic party’s progressives — that Don Berwick owns that role; and that her candidacy stood for realistic management and progress “for right now,’ as she retorted at one Forum to a Don Berwick flight of policy fancy. But her Arlington stump speech embraced the progressive agenda — and the label. I doubt it will change progressive minds.

3.Instead of excoriating Massachusetts’s recent GOP governors, she should have said something like this : “We Democrats have allowed the Republicans of our state to be more progressive, or more effective, than us. We nominated flawed insiders, next-in-line candidates, cautious conservatives, and they lost.

“Look at what Weld, Cellucci, and Romney did after beating us ! Their reforms should have been ours.

“We need to be practical reformers just as they were and, if possible, to do reform even better. Governor Patrick has been a great reformer, but we can do better than even he has done, on many many fronts. Because — believe me when I tell you — if we don’t do it, Charlie Baker will !”

THAT would have been bold. It would also have been the truth.

An insider can fib or fake the facts and get away with it. An outsider cannot. Especially when there’s an even stronger outsider waiting in the wings to see whom he will face in November.