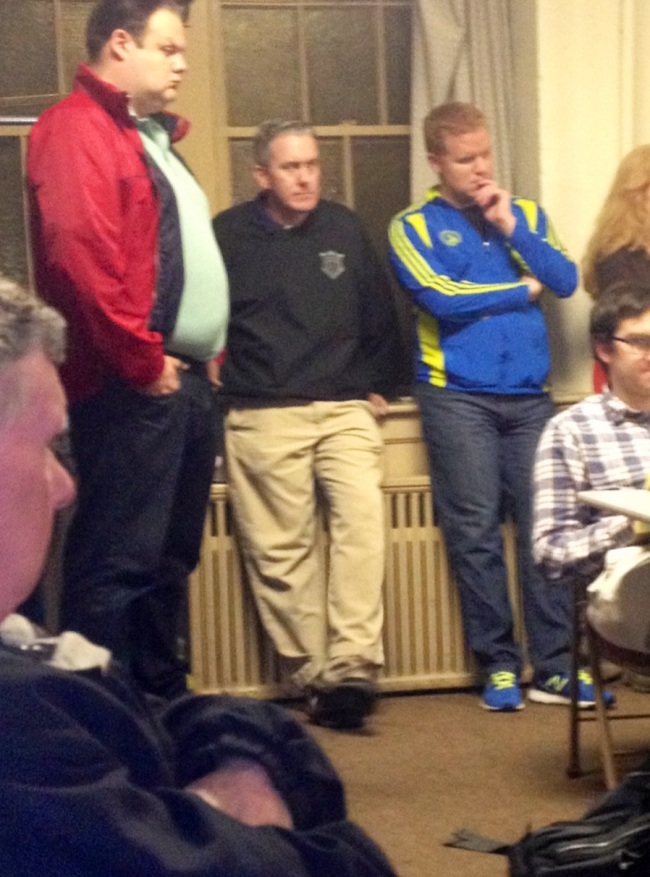 Like a candidate seeking election, the West Roxbury Quarry held a kind of meet and greet last night at St. Stephen’s Church on Washington Street. Into the church’s downstairs meeting room, where posters for the parish’s AA meetings hang on the wall, two Quarry people — including Laura Lorusso Peterson, of the long-owning Lorusso family — spoke to members of the West Roxbury Civic association (with old friend Larry Boran at the head table) and took questions from about 75 people, standing room only.

The message : the Lorussos want to drill for another 20 years, and they want to fill the Quarry’s huge hole even as they continue to drill. And to fill it, so it seems, with dirt that many local residents consider contaminated, even if recently changed state regulations don’t.

Was he right ? It wasn’t easy to tell. Most of the conversation was about fill ; lines of dump trucks trafficking Centre Street, unregulated fill, noise, dust, pedestrians at risk.

At this point State Representative Angelo Scaccia, elected from the District immediately to the Quarry’s east, entered the room and took his seat. Scaccia said not a word; his colleague Ed Coppinger, did the talking, Mike Rush and City Councillor Matt O’Malley too; both constantly nodded toward Scaccia as they spoke, as if seeking his blessing on the content of their conversations. (Perhaps justly, because Scaccia has sat in the House for over 40 years and has seen it all.)

Among the stuff Scaccia has seen all of is the Quarry. Noise from Quarry blasting has been an issue since both he and I had a full head of black hair. Dust from the quarry has been an issue that long too. An end to quarry operations has been spoken of since Bobby Orr played hockey. Yet the quarry does not end. It goes on. Today it commands a huge hole in the ground covering about 50 acres of what would have been prime West Roxbury land. If filled in — with dirt that doesn’t harbor chemical contraband — it would command huge money from housing developers who gladly pay $ 200,000 for a buildable house lot.

All of the above was mentioned with cold specificity by Steve Smith, of the West Roxbury Community Council.

Much else was said, with icy specificity, by people who face the Quarry up front : that the trees along Centre Street have all died of dust; that the blasting draws ever nearer to houses along its perimeter; that the Lorussos can’t be trusted because all of their previous promises haven’t been kept; and so on. Someone even suggested that there would be fill brought in from the Everett casino project, fill very contaminated indeed.

That was scary and raised all kinds of issues that none of the elected officials in the room chose to touch. 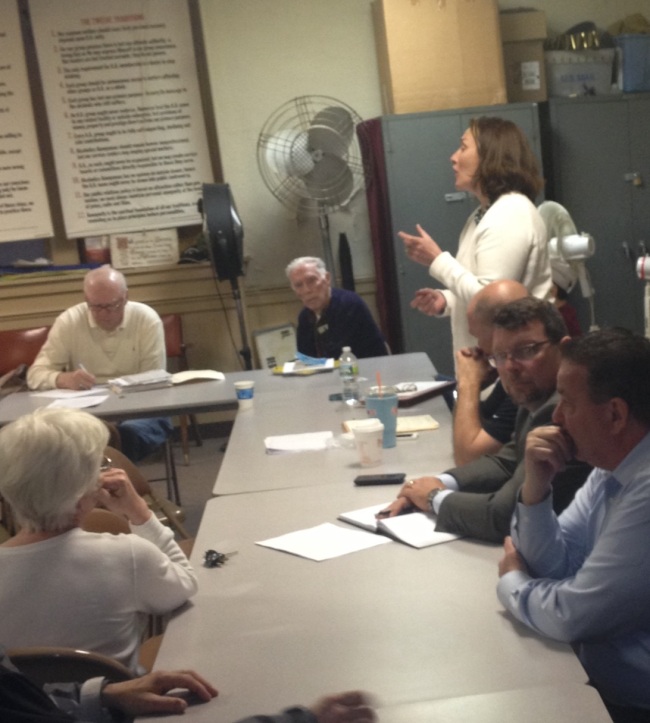 Laura Lorusso Peterson offered to pay $ 50,000 a year to “the community” as mitigation. Some scoffed ; asked one man standing on the opposite side of the hall, “are we really ready to sell West Roxbury that cheaply ?”

Peterson offered a “90 day moratorium” on bringing in new fill. “We can bring in fill whenever we like,” she said, ‘but we don ‘t want to do that. We want to give the community a chance to work out an agreement with us.” 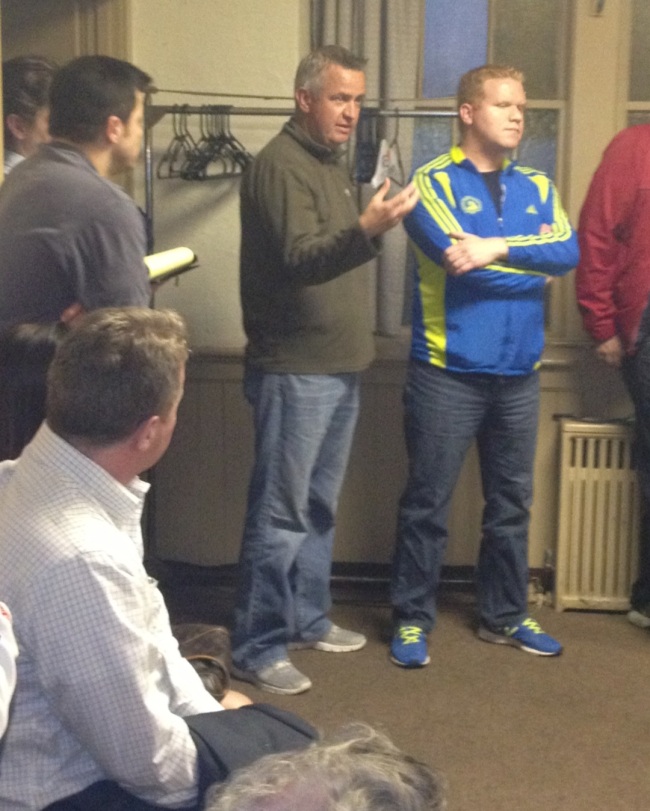 City Councillor Matt O’Malley wasn’t having it. “I’ve sponsored an amendment to our zoning code,’ he said, “All twelve of my colleagues have signed it. It will require that you seek community approval, then full neighborhood approval, then a zoning board of appeal hearing.” He then added : “i’m not trying to stop what you’re doing, just to assure a proper process.”

Many Americans complain of bureaucracy and red tape as it is, much less of new red tape. Not the people in the St Stephen’s room, however. This was a night to celebrate red tape.

Sensing the theme, Senator Rush took the floor to deliver an almost five minute speech on Massachusetts’s lack of laws governing quarry reclamation. He said that he would introduce extensive legislation to govern it and outlined his proposals. Applause was his, and more applause.

There was no mention in Rush’s speech of the taxpayer cost to hire people to monitor and enforce the new laws; but it sounded good, especially when Rush noted that “other states have quarry reclamation laws, so should we !”

As the cliche has it : “there oughta be a law.”

The meeting continued well past two hours long, but the theme of it was fully established in its first hour. There would be a new law, maybe or maybe not enforceable. City Zoning would acquire an additional layer of obstacle. The neighbors would continue to live with the Quarry, like it or not. New fill would be withheld for a time — but maybe not. And the blasting and drilling would continue for another twenty years.

And there would be a study committee formed.

Perhaps Angelo Scaccia summed it up best : “Michael, they talk fill, but they want to drill. This isn’t about reclamation at all. Same old.”