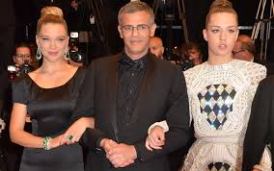 ^ passion in a girls’ house : Abdellatif Kechiche and his two blues, Adele and Lea

Abdellatif Kechiche’s beguiling portrait of passion and betrayal received much ado at Cannes where it won the top prize and garnered an NC-17 rating as it came ashore here in the ‘States. At three hours length, the French film, originally and more simply titled “The Life of Adèle.” is aptly just that, the tale of a young woman coming of age and her sexual awakening. The big brouhaha whelmed up over Adèle’s true love being another woman, and for the middle third of the film, as their relationship blossoms, the girls, one in high school and one in college, have torrid couplings under the noses of their parents. It’s pretty graphic too, with lip-to-labia contact, contorted scissoring and deep tissue rump massages.

The first of these protracted scenes feels apt and genuine as it’s fueled by ardor and emotion, but the follow-ons, by comparison, feel staged and exploitive. Still, it’s how the two women, Adèle (Adèle Exarchopoulos) and Emma (Léa Seydoux), meet and their journey that drive the film, not the over-the-top sex-capades. Adèle, fairly popular at school, has a quick, trivial interlude with a male classmate, who after achieving conquest, becomes cold and aloof. Then, out at a gay club with male friends, Adèle wanders into the abutting lesbian meet-market where she’s instantaneous shark bait. Across the bar, she and the blue-haired Emma (perhaps the impetus for the American title–and the fact, that Adele is almost always wearing a blue dress or like-hued attire) repeatedly lock eyes. The sharks circle closer and take their exploratory nips. That’s when Emma steps in and pulls Adele from a persistent plier, offering simply a sprig of earnest camaraderie, without pander or expectation, but also, clearly there’s desirous intent.

Nothing happens that night or for a while. Emma shows up after school one day and the two hang out and have lazy conversations about life and art — and for that very public schoolyard pickup, Adèle becomes ostracized by her classmates who demand to know if she’s a “dyke” or not. It’s not the only speed bump in their evolution. Emma has a significant other and Adèle struggles with her identity, but in slow intimate moments, Adele’s inhibitions give way to curiosity and it is she, not Emma, who launches the first kiss.
Following the fleshy entanglements of notoriety, the film jumps ahead a few years, Emma has completed art school and is looking for inspiration and her big break. With piercing celestial eyes, a noticeable gap between her teeth and icy blonde hair, she looks even more Bowie-like and is more focused and driven than her carefree, clubbing earlier self. Adele, still the youthful, broad-toothed ingenue has become a kindergarten teacher and the two live together in a cozy row house. Everything is near perfect; Adèle poses nude for Emma, the art community gathers to admire Emma’s paintings and are taken by the ravishing lipstick lesbian and muse who has unlocked Emma’s inner talent. It is here that success, alienation and infidelity become the serpent in the garden and the film turns sharply into a meditation on depression, disconnection and anger.

Interesting that all this insight of the inner workings of young Parisian lesbians comes at the fingertips of a seventy plus year-old Tunisian director. Kechiche’s other films, “Black Venus” (2010) and “The Secret of the Grain” (2007), dealt too with forms of class-ism, and while less intimate in the characters’ interactions, their insights were more intimate. In “Blue,” amid all the steamy sensuality and posturing about passion and irrevocable yearning, there’s something that never fully carries through. Emma changes and morphs into something less appealing, yet tangible and empathetic while Adèle remains at sea. Then again, not everything in life is tidy and neat, some people try new things to find out who they are and in the process hold much inside, much too tightly. It’s tres French and tantalizing in all the right ways, underscored by the way Kechiche ends the film with pointed ambiguity.