^ insurgent (and endorsed by Doris Bunte) : Jamahrl Crawford acts out at RoxVote Forum

The Forum gathered at Hibernian Hall on Dudley Street, and differences aplenty displayed themselves. One saw Tito Jackson, the incumbent, well dressed, well informed, almost professorial as he articulated his council service in detail; Jamahrl Crawford, his main challenger, passionate, a classic insurgent with a long, long history of activism; and Roy Owens, a quiet slender man who has run for office numerous times and whose issue is that City hall should work its Roxbury agenda through faith-based communities.

Time and again Crawford insurged his campaign demands : for housing afforability; that the Roxbury innovation Initiative needs all kinds of enterprises; that city services should revive the RISE movement; that gentrification of the District should mean economic development. Crawford spoke rapidly and intensely, a preacher inspiring. His presentation harked back to an earlier time, when oratory glowed hot onto the faces of listeners; yet it also elicited more applause from the 100 or so voters on hand than either Jackson or Owens. He talked at length about his grandmother, living on the third floor of their Ruthven street house even at her age and being feisty, not one to pander to (as Crawford said politicians do too often when addressing seniors); and this, too, drew applause from many. 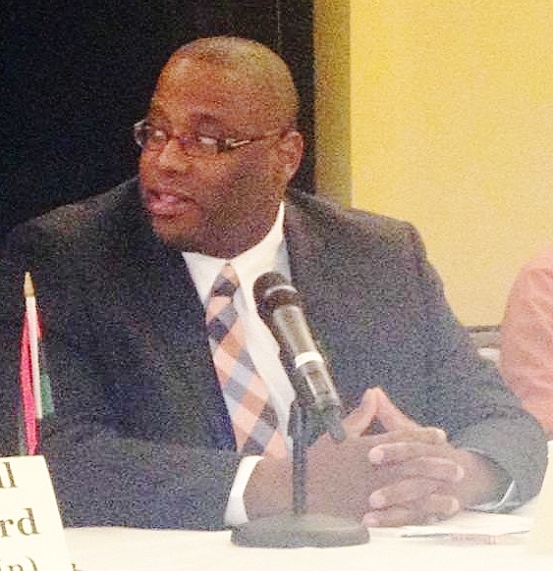 ^ detailed answers to all questions but one : Councillor Tito Jackson at RoxVote Forum

Jackson, by contrast, answered every question by narrating the actions he has taken to address the problem or advance the initiative. His housing plan is a three on three : one-third low income housing, one third affordable, and one third market rate. Jackson proposed communication and coffee hours as his constituent outreach proposal. He opined at length about the Boston Police’s Safe Streets task force and the need for the City’s Public Health Commission to rate crime a health problem.

About the Roxbury Innovation Center, Jackson noted that Tim Rowe of Cambridge innovation has committed to run it; but he did not give any answer as to why he was not present when his Council colleague John Connolly, with several prominent Roxbury business leaders at his side, announced his support for said Center. It was at that point that Crawford responded, “we should have had one years ago !”

As for Roy Owens, I mean no disrespect in reporting that his answers were hard to hear, seemed to ramble or disconnect from the question when one could hear them, and often included banter with his two rivals, inaudible except to them. Many in the audience chortled. His was obviously a presence well known to them and long since dismissed. Owens’s one serious point was that all City services should be funneled through “faith based communities.” In a District whose people are so well and diversely led by pastors and church congregations, his call did not seem to me an isolated gasp or readily dismissable. But a generational gulf separated it from Crawford’s protest speeches and Jackson’s managerial steadiness.