Marty Walsh must be thinking the election gods have cursed him. On the very morning that he has two important endorsements to announce, the Boston school bus Drivers’ Union stages a walkout and totally steals everybody’s attention. And who is the candidate of school transformation ? To whom parents turn this morning for guidance ? John Connolly. And at his facebook page they find it, comprehensive and helpful.

Yes, the job that you signed up to do, you need to do. But even more so, there should be a reason, a goal, a mission, that motivates you to do that job. Score a big one for John Connolly.

The School Bus drivers’ walkout really hurts Walsh. His message has been, “look, I’m a union guy, the union folks trust me, they will listen to me.” Maybe some of them will. More likely is that union workers are supporting Walsh not for his sake but for theirs. Today’s job action makes that point clearly enough — as if the huge BPPA arbitration award hadn’t already made it. And what was the huge labor issue that led to the drivers’ work stoppage ? Simply that they object to a GPS mobile application that enables school parents to track a school bus in real time.

For THAT, the drivers disrupt everyone’s day ? Listen, drivers : the rule is that a parent needs to be at her child’s bus stop when the bus arrives, to pick up said child, or else the bus drives off with the child still inside, and then the parent must do a ton of work to find out when the bus will return. If a parent can track that bus in real time, she will be less likely to not be there when the bus arrives at her stop. I don’t think that’s exactly hard for even a driver to figure out.

But enough. The School Bus Drivers not only dinged Marty Walsh badly, they also stole the spotlight from two big endorsements that he received later this morning : Felix Arroyo and John Barros. the Arroyo endorsement was expected. Walsh already has Arroyo’s top advisor, Doug Rubin, guiding him to key parts of Boston’s communities of color. Arroyo’s Dad, Felix D. Arroyo, was a long time ally of Ray Flynn, a candidate from much the same place as Walsh and of much the same support base. (I’ll have more on this subject in a later article.) 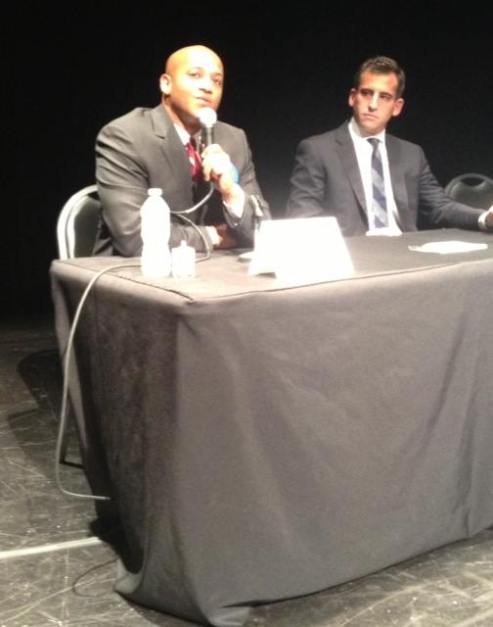 ^ John Barros (on the left) : today announces that he supports Marty Walsh for mayor

More surprising is John Barros’ embrace of Walsh. Barros’ education ideas and city vision parallel John Connolly’s almost exactly. So why has he tossed his lot in with Marty Walsh ? I have no hot poop on this issue, but I’m guessing it went something like this :

( 1 ) Barros’ portfolio is education; because Connolly’s theme is education, and his mastery of the issue is so thorough, Barros likely saw no need by Connolly for his advice; whereas with Walsh ? It wouldn’t surprise me at all if the High Schools proposal that Walsh released only two days ago was forged in consultation with Barros. A Walsh administration would have plenty of need for Barros’s education knowledge.
( 2 ) Barros also cares greatly about development of the Dudley Square area. As Walsh’s mantra is the Boston building boom and construction jobs, it would make sense that Barros asked for, and received, specific commitments by Walsh to Barros’s Cape Verdean community that it would get plenty of those construction jobs — and also some construction contracts.

Barros has every right to make the choice he has made. My problem with it is that it undercuts his visionary mission. He has opted for some specific — but small — gains now rather than taking the large, long-term, transforming view with Connolly : a vision that he advocated passionately at numerous Forums. Barros had better hope that he can impart to Marty Walsh and his core advisors some part of the long view that for months he advocated.

If not, he has contradicted himself.