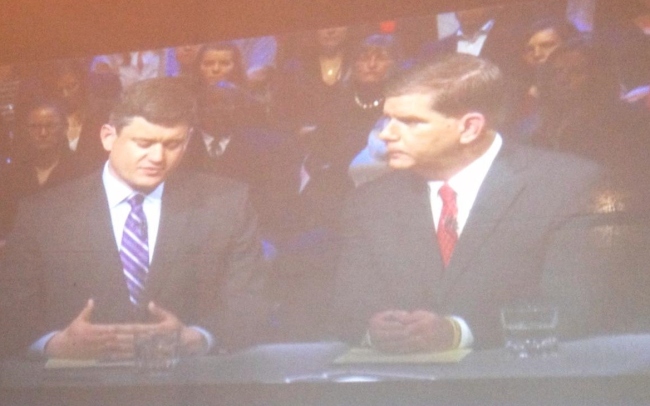 John Connolly easily carried last night’s second Mayor debate, but not for any of the hot button reasons being touted in the blog-o-sphere or news media. He did not win it because he crushed Marty Walsh on the “smear flier” matter. He didn’t win it because Walsh had no good reply to co-moderator Margery Eagan’s question as to why he hasn’t withdrawn his State Legislature bill to abolish city Council review of arbitrators’ awards. Nor did Connolly win it when Walsh made the mistake of saying his many endorsements by elected officials came from “a lot of my friends,” thereby reducing their prized blessings to an act of buddy-buddy.

Nor, even, did Connolly win it because he spoke eloquently while Walsh seemed unwilling at times to talk (David Wyatt ??) and when he did talk, often came across as chromosomically clumsy. After all, our current, beloved mayor, Tom Menino, epitomizes clumsy.

So forget all of the above for the moment. The reason that John Connolly won this debate, and a big part, too, of his mastery of the first debate, was his commanding knowledge of the city budget — its finances and its process. Time and time again, when Walsh tried to tie Connolly to this or that Council decision, Connolly proved Walsh’s attacks untrue, or misinformed, even clueless, at times, about how the City’s financial decisions are made, or why.

Mastery of the city budget isn’t just dry leaves. It’s the very essence of what City government is all about. Indeed, budgets are the core of all governemnt. It’s why we have governments and how they operate. Voters may well excuse Walsh’s clumsy debating ; especially because he is not the incumbent. Voters do expect a Mayor to speak authoritatively and readily on City matters, but a guy not yet Mayor is accorded some slack. But given another guy who is also not yet mayor, and who knows the City’s most basic function in and out and can explain it in a way that makes it seem as crucial as it is, voters cannot help but notice who is ready to govern and who might need some on the job training.

Rarely was Connolly’s mastery of the city budget on display before the primary — though I do recall one instance of it, in which, at Forum, he crushed one opponent who simply did not know the budget at all. Connolly’s entire campaign was predicated on school transformation — his phrase — and he became “the education candidate.” Yet last night he was asked few questions about education, though these he responded to with focus and passion, and, quite frankly, these questions probably did not matter much to voters watching. They already know where Connolly stands on education in the city, and they are learning quite rapidly that Walsh, too, has a well-thought-out city education plan. What they did NOT know – indeed, what I too did not sufficiently grasp — was that Connolly has such command of City budget matters. During the primary, at dozens of Forums, it was Dan Conley who made city administration has hallmark; Connolly rarely spoke of it.

But that was then. The fact is that because of his Budget process prowess, Connolly has now moved very close to becoming the man who will operate it for the next four years.

Post script : It is not that surprising to find that Walsh is no match for Connolly as a city budgeter. in a city labor negotiation, the labor negotiator says ; ‘this is what we want. How you do it is your problem.” Walsh is now looking to switch to the other side; to it being HIS “problem.’ it’s not an easy switch to make, especially when there’s a guy already there who knows the “problem” inside and out.

Walsh has one week to get in this game. he has the support of three current City Councillors : Felix G. Arroyo, Frank Baker, and Tito Jackson. They had better teach him fast. And he had better be ready to explain what they teach him.

Not all the Greater Boston Labor Council — hardly an “outside group” to a man who has been part OF it for many years — anti-Connolly fliers in the world can save the City Budget Day for Marty Walsh. Not all the local 1199 members door-knocking — and thus reinforcing voters’ perception of Marty as “the union guy” — can do it. Nor all the picket-line stand outs. This campaign has so far showed itself unwilling to learn anything about what voters outside its circle of interest are like. Can they do it now ?