The picture that heads my column is one that I admit I never expected to see in this Mayor election. Charlotte Golar-Richie, the quiet, cautious, middle of the road administrator, endorses Marty Walsh, her opposite in every way.

It’s a big boost for Walsh and will certainly have an effect on the November 5th vote. Until Golar-Richie came forward, Walsh’s campaign looked lost and losing. Just in the first five of Boston’s 22 wards he looked down by 10,000 votes. Now that margin looks quite less.

I opine thus not because of the mere fact of Golar-Richie’s endorsement but on account of WHY. The answer is not simple or obvious. Sure, there are personal issues and policy differences that have developed over the years of Connolly’s service on the Council, between him and some activists who certainly Golar-Richie talked to. But i prefer not to think that Golar-Richie chose because of personal stuff. She’s bigger than that. And her endorsement speech offers a wider clue : she talked about Walsh being a Mayor for “working families.” That phrase never crossed her lips during the Primary. They are Walsh’s theme. So who was she saying them to ?

There’s answer for this question too : she was saying them to the union activists who oppose the school reforms that John Connolly wants. These reforms have drawn the ire of Teachers’ Union activists since they were first bruited. Yet they are exactly the reforms being advocated by President Obama’s education secretary, Arne Duncan, and, in Massachusetts by Democrats for education reform.

Why would union activists, Democrats all, oppose so resolutely reforms being proposed by a Democratic President ? In the twitter-sphere — and the blog-o-sphere — one finds out. There one finds a growing anger among progressive people against the radicalized GOP and also against a President whom these activists see as “giving away too much” to the GOP. The radicalization of the GOP is, as Bill Moyers writes astutely, the big political story of the year. Almost as big a story is the like radicalization taking ground inside the Democratic party. You cannot radicalize an electorate in only one direction; voters who differ aren’t going to just sit still and let a radical party take over — or block — the nation ‘s direction. Activists DO things. And so activists on the progressive tip are doing.

In Boston’s Mayor election that has now come to mean opposing a school reform led by Democrats ! The verbal overkill abounds : that Connolly’s school agenda means “privatization” of the public schools, that it’s “some outside group” doing it, that “he’s a jerk,” etc etc. In fact, John Connolly is about as traditional a patrician urban reformer as you can find. What is there in his suggestions for a longer school day, greater leeway for principals to choose teaching staff, core curriculum, and support for charter schools as an alternative, that requires raising the hue and cry ? Horace Mann’s school reforms of the 1840s were no less ambitious, nor the much more radical reforms advocated by John Dewey 110 years ago. 50 years from now, John Connolly’s reforms will look as obvious as Dewey’s and Mann’s reforms 50 years after their day.

The older a nation and its institutions become, the harder it is to reform them. Our nation has aged greatly since 1840, 1900, even since 1965. Reforming our associations today seems almost impossible to do; those vested in them simply WILL NOT change. We see it in Washington, where he Tea party opposes everything and anything that will make this nation fairer and better. Now we see it here in Boston.

Reform of Boston’s schools should begin with the teachers; and with the parents; but for too long there has been disconnect — indeed, a widening of it — that has made school reform a bridge broken; and John Connolly, himself a former teacher and a public school parent, has stepped in to span the reform forward. For this he has incurred the enthusiastic support of school parents, and the support of education-agenda Obama Democrats — and the ire of teacher activists and many economic progressives.

I have had personal experience of this disconnect. I read the Boston Teachers’ Union ten-page schools manifesto several times. For some months I have tried to moderate between friends in the Union and the Connolly agenda. I suggested that the BTU should endorse Connolly, saying we differ on how to reform the schools, but we are one in making schools the top city priority.” I failed. I hope we can still talk and be friends.

I suspect there are many, involved in Boston’s civic matters, who are saying something like.

The education-issue split in the Massachusetts Democratic party seems a portentous event. Add to that the economic split : progressive activists dislike the Obama administration’s ties to big finance. In Boston, some fear that John Connolly is the banker candidate. The business development candidate, he surely is. It’s where Boston is headed and has been headed for at least the last dozen years. But Connolly is by no means a Koch Brother or ALEC guy. He might say, in his own words, that the business of Boston is business, but Connolly’s business looks as if it will be a business culture tolerant, diverse, and open to all who have talent; with all lifestyles fully respected; a “green” business culture and one that supports living wage legislation. This is controversial ? Seems that it is.

The Tea Party first arose in very “red’ states, where the “reformers” were all GOP. Massachusetts is a very “blue” state. Here the Democratic party is almost all, and, as the people of a democracy usually find themselves on the opposite side of issues, splitting the Massachusetts Democratic party is the only option. But ; if that were all that is now happening in this mayor election, it might be set aside afterward. it isn’t. The national Democratic party is splitting too, as progressive activists, tired of President Obama’s cautious generosity of style, are taking the matter of opposing Tea regression into their own hands. We see it in Texas with Wendy Davis, in California thanks to Governor Brown, in the talk of nominating Elizabeth Warren for President rather than Hillary. We see the fight everywhere against Wal Mart and for a much more livable minimum wage.

Yet John Connolly agrees with progressive activists on all those issues — passionately and uncompromisingly so. Only on the issue of school reform do he and the activists differ; and that one difference is now enough to cast him as the activists’ bogeyman, the evil enemy. To those who have watched the Tea party demonize conservative GOP Senators who “aren’t conservative enough,” it all looks depressingly familiar.

This is what Charlotte Golar-Richie has decided to take sides with. People do what they are gonna do.

BREAKING : Just as I began to post this column, word came that Charlotte’s campaign field director Darryl Smith, AND her Finance chairman Clayton Turnbull are BOTH going to work for John Connolly. Talk about timing ! 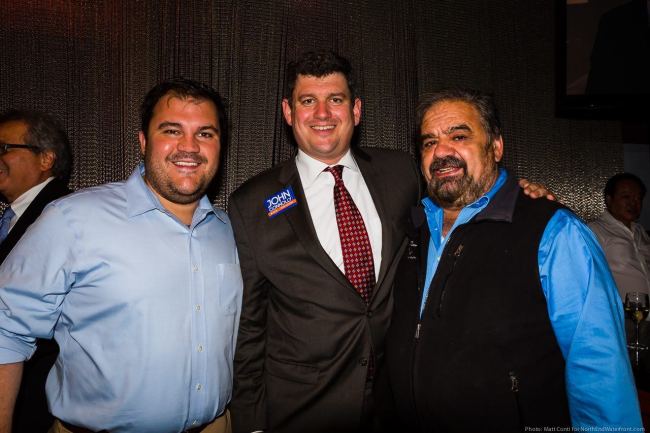