Boston’s City Council has little power via the present City charter. Such little as it has is most effectively directed to questioning the Mayor’s agenda. Even though the Council almost always gets onto the Mayor’s side on such, merely by questioning it awakens the City’s voters to agenda items that might not win most voters’ favor. And they are less easily brought aboard the Mayor’s agenda than are the Council members.

Every Mayoral agenda contains items that voters might justly question. That’s why we, at Here and Sphere, in making our endorsement and suggestions for the Council, rank a candidate’s potential independence first of all. We want the Council to answer to constituencies that the Mayor’s agenda does not favor. We see the Mayor’s proposals and the Council response as a kind of labor negotiation, one in which a common middle ground is reached. For that reason, we especially insist that the at-Large (city-wide) elected Councillors demonstrate this independence.

Which is why we balance our endorsement of John Connolly for Mayor with an endorsement of jack Kelly as a city-wide Councillor. He will be as comprehensive a “voice for labor’ as anyone of the eight candidates on the ballot. None, to our knowledge, has received as many Union endorsements as has he. Moreover, Kelly is not only a “voice for labor.” He has Planned Parenthood’s endorsement, that of District Four Councillor Tito Jackson, and the support of at least two Boston Globe columnists so far.  And just today, he gained endorsement by Ramon Soto, who was an at-large Council candidate himself.

Kelly addresses issues only after careful study — no Council candidate is more thoughtful. His enjoyment of people is infectious; everybody sees it. If anyone in this year’s election has the inner stuff to enthuse almost everyone, it is Jack Kelly.

The other seven candidates include four of the seven who we “suggested” in the Primary. The three who missed the cut — Chris Conroy, Catherine O’Neill, and Phil Frattaroli  — will, we hope, be heard from again. The four “suggested’s” who did make it — incumbent Ayanna Pressley and newcomers Annissa Essaibi George, Marty Keogh, and Jeff Ross, all of whom we like a lot — now find themselves in competition with three whom we did not suggest. These are serious contenders : incumbent Stephen J. Murphy; former Councillor Mike Flaherty; and one newcomer, Michelle Wu.

^ Annissa Essaibi George : very Dorchester and as “Dot” is Boston’s largest neighborhood, that’s reason enough to like. we do. 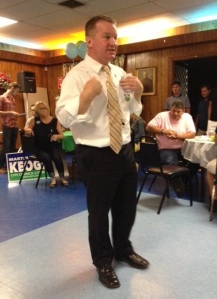 We continue to like our four “survivors.” We understand that at least one, even of them, will not be elected in November. Yet we cannot simply dismiss Flaherty, Murphy, and Wu any longer. So how, at first look, do we judge their candidacy ?

^ strong in every neighborhood of Boston : Mike Flaherty

1.Mike Flaherty has put together a citywide vote as uniformly strong as any Council candidate. And city-wide strength is something we want to see in a city-wide candidate. It’s almost as important as independence.

After failing to win election in 2011 — having lost badly in 2009 when he challenged mayor Menino — Flaherty has won back all the voter confidence that had appeared no longer his. We would be very surprised if Flaherty does not win back his Council seat, and we will be doing a Profile of him next week. In which we will take the temperature of his independence of mind.

^ Stephen Murphy : what has he yet to do that he has not already done ?

2.Stephen J. Murphy has been a personal friend of this writer for almost our entire adult lives. Indepenence from Mayor Menino is built into his soul. Murphy’s mild, gentlemanly manner belies a passionate commitment to traditional Boston ways and agendas — into which he has, much more smoothly than I thought likely, blended all kinds of “new Boston’ constituencies. Murphy seems to say, “you may be think you’re one of those ‘new Bostonians,’ but you’ll fit right into traditional Boston, I will take you there, and you will like it.” No one else on the Council could have done this important mission as successfully.

My only question of Murphy’s continuing on the Council is whether or not his work hasn’t been fully accomplished. What has he still left to do that others can’t do ? I will be asking him this question in a coming profile.

3.Michelle Wu. She was said to be all over the city; we have all seen her worn-out-shoes news story. Yet I, despite being all over the City at street level myself, since the beginning of August, only met Wu for the first time at the Roslindale parade. Where did she wear out those shoes ?

The Wu candidacy puzzles me. She took fourth spot in the Primary by a huge margin : how did she become so well known ? so well thought of ? Better known than marty Keogh ? Better thought vof than teacher and neighborhood activist Annissa Essaibi George ? More worthy a progressive than Jeff Ross ? Her personal story is impressive : harvard Law School graduate and care provider for her widowed mother. Her political story seems even more to the point : she was a campaign staffer for Senator Elizabeth Warren, the most popular politician in Massachusetts.

Yet others in this year’s Council campaign worked for Warren as well. All, even Jeff Ross, who grew up on the West Coast, have longer and deeper attachment to Boston than Wu, who only recently moved to the City. Why the Council ? To me, at first look, Wu seems better fitted to head a city administrative department than to be a elected voice. If the theme is “new Boston,” Ross, to our mind, fits the bill much more profoundly than Wu. Surely her biography and Warren connection impressed many voters who don’t accord their Council votes a policy importance. To me, using a Councillor vote to congratulate an impressive personal achievement is to disrespect the Council. A Councillor should be more than a graduation day photograph.

That said, we will be talking to Michelle Wu next week and asking her what there is about her candidacy other than a very impressive bio.