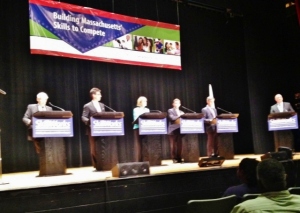 ^ the five, but no Charlie Baker at Boston Foundation’

The big news about the Boston Foundation’s Skills Forum on Wednesday night at Roxbury Community College is that Charlie Baker wasn’t there.

Every time looked at the five candidates who were there, or listened to them answer a question, all i could think was that the 200 or so people in attendance weren’t going to find out what the candidate most likely to be our next Governor has to say to Boston’s Skills community.

Even though his name was never mentioned, Charlie Baker had to be on everyone’s mind.
All the more so as many of the five — Don Berwick, Evan Falchuk, Martha Coakley, Steve Grossman, and Jeff McCormack — gave answers sometimes informative, occasionally innovative, once in a while brilliant, but also often vague or off topic.

Questions were asked by Forum moderator Peter howe and by some who he called “real people” : audience people, including young graduates, business hopefuls, and owners of growing start-ups, many of them immigrants. 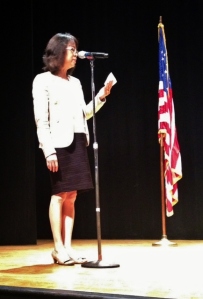 Don Berwick hit the evening’s home run when, in answer to a question posed to all, “what was your first job and what did you learn from it,” he said “I was a waiter at a summer resort in my home town, and I will never forget how hard that work was. Which is why I support a living wage !” Much applause ensured, the event’s loudest.

Still, Steve Grossman, who is never vague and rarely jejune, produced a much more detailed internship proposal — paid internships, half from business and half by the state — than Berwick’s generality answer.

Grossman also attacked Martha Coakley for her support of secure communities and her refusal to endorse driver’s licenses for undocumented immigrants — ‘it’;s a public safety issue,’ Grossman insisted — and thereby evoked from the usually vague Coakley a pointed, feisty response : “Steve, you insist on misrepresenting my record 1 Yes, I supported secure communities at first, as did Mayor Menino. It then seemed like a good idea. Since then, we learned that it wasn’t, and i withdrew my support. as for driver’s licenses, we need to co-ordinate that with the Federal government. i am already looking into that.”

I fully expect to hear more clashes between Grossman and Coakley as Primary day approaches. We also now know that Coakley is fully capable of, and quite ready to, defend her positions, whether or not we agree with her.

Les dramatic, but informative, was independent candidate Jeff McCormack, who gave a business start-p executives’ answers to many questions. Being a governor is by no means the same as steering a start-up business, but McCormack was right to suggest that the next governor apply performance measurement — what we usually call ‘evaluation” — to state administration. i suspect that Charlie Baker will do all of that and more.

Forum attendees also heard from Evan Falchuk, who seeks to create a third party in Massachusetts, although it’s not clear what a Falchuk party stands for other than being a third path. he said that we need to elect people who are actually committed to doing what they tell the voters they will do : easy to say, but complete;ly oblivious to the complexity of the political process. Falchuk also took a demagogic swipe at Charlie Baker (without naming him) that did lttle to enhance his alternative politics.

So where WAs Charlie Baker while all of this was going on at a Forum whose stated purpose was to promote job growth, business opportunity, and connectedness for young school graduates ? Out meeting voters, actually. He and running mate Karyn Polito attended two fund raiders, both on the North Shore, including one at Longboard, a Salem waterfront restaurant, hosted by Young Professionals of the North Shore.

Baker is concentrating a sizeable part of his campaign on the North Shore,. it’s his home base, and he is working it deeply and broadly. Carrying Essex County by a big margin is essential to his win strategy, and from what I have seen of it — quite a lot, actually — the plan is working.

Still, it would have been good to see him at a Forum. He has eschewed most of these. I wish he would change his tactic. He can handle all of his rivals and should do so face to face.