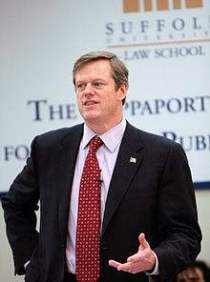 The election won’t take place until November of NEXT year. Yet already the big political talk state-wide is, “who will be our next Governor ?” As Deval Patrick is not, after two terms, running for re-election, the question matters.

There is no obvious successor. Many fit the role, but none dominates it. For the Democrats, Attorney General Martha Coakley looks most formidable; but State Treasurer Steve Grossman — who announced his candidacy yesterday — rates as supportable as well, and so also, on his resume alone, does Donald S. Berwick, a medical doctor best known as President Obama’s administrator of Medicare and Medicaid services.

You would suppose that the presence of three such star-quality candidates would preclude the availability of a fourth: but you would be wrong. A second Obama administration official, Juliette Kayyem, is said to be preparing her candidacy. Kayyem appeals to those who believe that intellectual rulers should rule. She worked in the sardonically named “Department of Homeland Security,” lectures at Harvard University and writes op-eds for the Boston Globe. Kayyem is an all-in supporter of the secret surveillance state. Sadly, this is what the Democratic Party, once the courageous tribune of the rights of ordinary people, has just about become in paranoid America, 2013.

Governor Snoop ? Democrat Juliette Kayyem is thinking about it.

Of course Kayyem might not actually declare. We hope she does not. State government has already become an enemy to many of the basic rights of ordinary people : think the recent and ongoing attack upon people receiving EBT benefits. Ponder the opposition to the Governor’s “transpo” bill and its new taxes, money needed if the state is to maintain, even improve, public transit, by which many ordinary Massachusetts people get to work. The last thing that ordinary Massachusetts citizens need right now is a governor trained in secret snooping.

Of all the Democrats likely to run, Martha Coakley has the best record of advocating for ordinary people. Her long campaign against the mortgage banks and their predatory, deceptive, and downright self-seeking lending and foreclosure practices deserves the congratulations of us all. Yet even Coakley has a tainted past. What Coakley watcher can forget how ruthlessly and unforgivingly she, as Middlesex District attorney, pursued the Fells Acres, day care providing Amirault Family back in the 1980s and for two decades thereafter ?

Despite which, Coakley looks to be the Democrats’ top gun, and that perception is currently well deserved.

Which brings us to the Massachusetts Republican Party. Since the local GOP has provided four of our last five governors — Weld, Cellucci, Swift, Romney — you might expect the GOP nominee to be the favorite to win in 2014. We think so too. Quite unlike the national party’s decline in civic morality and policy intelligence, the Massachusetts GOP features a long bench of A-list candidates, most of them progressive on every civil rights issue and some of them progressive even on economic agendas. Do not be misled by the dullness — except for Dan Winslow — of the GOP’s recent US Senate campaign. For the governorship, our local GOP has plenty to cheer about.

First up is Charlie Baker, an master administrator who ran in 2010 and would probably have won, had his campaign handled more deftly the presence of a strong third candidate. Baker is almost sure to run again.

It is thought that if he does not, former Senator Scott Brown will run. Brown is low-key, personable and still very much liked. He knows Beacon Hill well, having served in the legislature for ten years. The last State Senator to be elected Governor in his own right, the late Paul Cellucci, was an effective leader indeed.

(NOTE : Jane Swift had been a State Senator prior to becoming Lieutenant Governor. She succeeded to the Governorship when Cellucci was appointed Ambassador to Canada.) 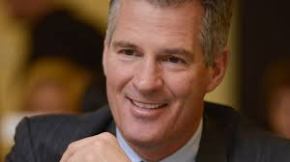 Mary Z. Connaughton, who ran for state Auditor in 2010 and lost by one percentage point, might run if neither Baker nor Brown does so. She is an excellent campaigner and would be a superb candidate if she moves away from her retrograde views on social and civil rights issues.

Also possible candidates are Dan Winslow, by far the sharpest — and most under-funded — of the recent US Senate hopefuls, and Rich Tisei, a committed progressive, 16-year State Senator who lost a 2012 race for Congress by only 1,000 votes.

Clearly the Massachusetts GOP offers our citizens what a major political party should : credible candidates who stand for progressive policies beneficial to the many, not just the few. At least one such GOP candidate will run; and given the strength of the Democrats’ Coakley and Grossman — Berwick too — it should be a very intense election, with state infrastructure and education spending the prime issue : issues about which the Massachusetts GOP — so unlike the GOP nationally — offers solutions well in keeping with our state’s regard for civil rights and for the needs of those on or near the economic bottom

Our Governor campaigns always are about solutions and, by election day, so intense. This one already is.

UPDATE  as of 1:45 P.M. 07/11/13 : yesterday we learned that State Senator Dan Wolf, founder of Cape Air and representing of the Cape Cod and Islands District, has announced for the Democratic Party’s Governor nomination. More details as we get them.