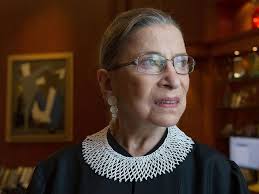 ^ Ruth Ginsburg, Dissenting justice. From her dissent, these words :  “In a decision of startling breadth, the Court holds that commercial enterprises, including corporations, along with partnerships and sole proprietorships, can opt out of any law (saving only tax laws) they judge incompatible with their sincerely held religious beliefs,” Ginsburg wrote. She said she feared that with its decision, the court had “ventured into a minefield.”

On Monday, the Supreme Court, by a 5 to 4 majority, ruled that the owner of a corporation may, on the grounds of religion, deny an employee insurance coverage for contraception therapy. You may read the Court’s opinion by clicking this link :

The link also gives Justice Ginsburg’s fervent, eloquent, definitive dissent, a dissent that I hope every American who is not lashed to the mast of orthodoxy reads, not once but often !

The decision is as black a mark on the Court’s record as any decision it has made since the early 1930s. By what theory, however arrived at, can it be lawful for an employer to interpose its boss’s religion between its employees and health insurance coverage ? A company’s employees do not sign on to an employer boss’s religion. They sign on to work a job. Even if a boss lets prospective employees know in advance of hiring that his religion will refuse the employee certain insurance coverage, he is in the wrong. By what law can he discriminate against employees who do not consent to his religion ?

That’s the basics; but it’s not the whole story of this tragic decision. Note that the coverage denied is for women’;s health care — not men’s.  That’s because in most religions, and always in the rigid religions,  men are OK and women are not. Men have rights, women have burdens.

The decision is also ironic. Who’d have guessed that the five who made this finding’s majority opinion would advise women to seek contraceptive insurance coverage from the Federal government ? As Robert Reich pointed out not an hour after I had already done so, the five justices offer women insurance through Medicare — single payer !

Which is the big, unspoken consequence of this decision. In a sense, the five justices have a point : the ACA plays into the whims and quirks of every employer that offers health insurance. The ACA made a huge mistake in not simply expanding Medicare to cover everybody — which is the system in every other first world nation — and be done with a Rube Goldberg world of employers, private insurers, health care exchanges, websites that don’t work, confusion and complication.

Should have, but didn’t, because President Obama wanted to compromise.

Compromise ? With the absolutists of religion there is no compromise. it’s their way or damnation.

The Burwell decision is a tipping point in the nation’s social history. we will now either slide backward into theocracy and all of its cruel history of torture and death — visit the 1600s some time — or we will (1) reverse the Burwell decision and (2) go single payer insurance, so that bosses with personal agendas will never again bar anyone’s door to a basic civil right : health care as doctors and all other health professionals advise it.

To get to this, we will have to elect a Democratic President in 2016, and re-elect her in 2020 — we dare not trust the Republican party of today, most of which applauds this bad decision — because only she will appoint justices who will put human rights and needs ahead of private pique and thus assure that the law equally advances the aspirations, rights, and dignity of actual human people.