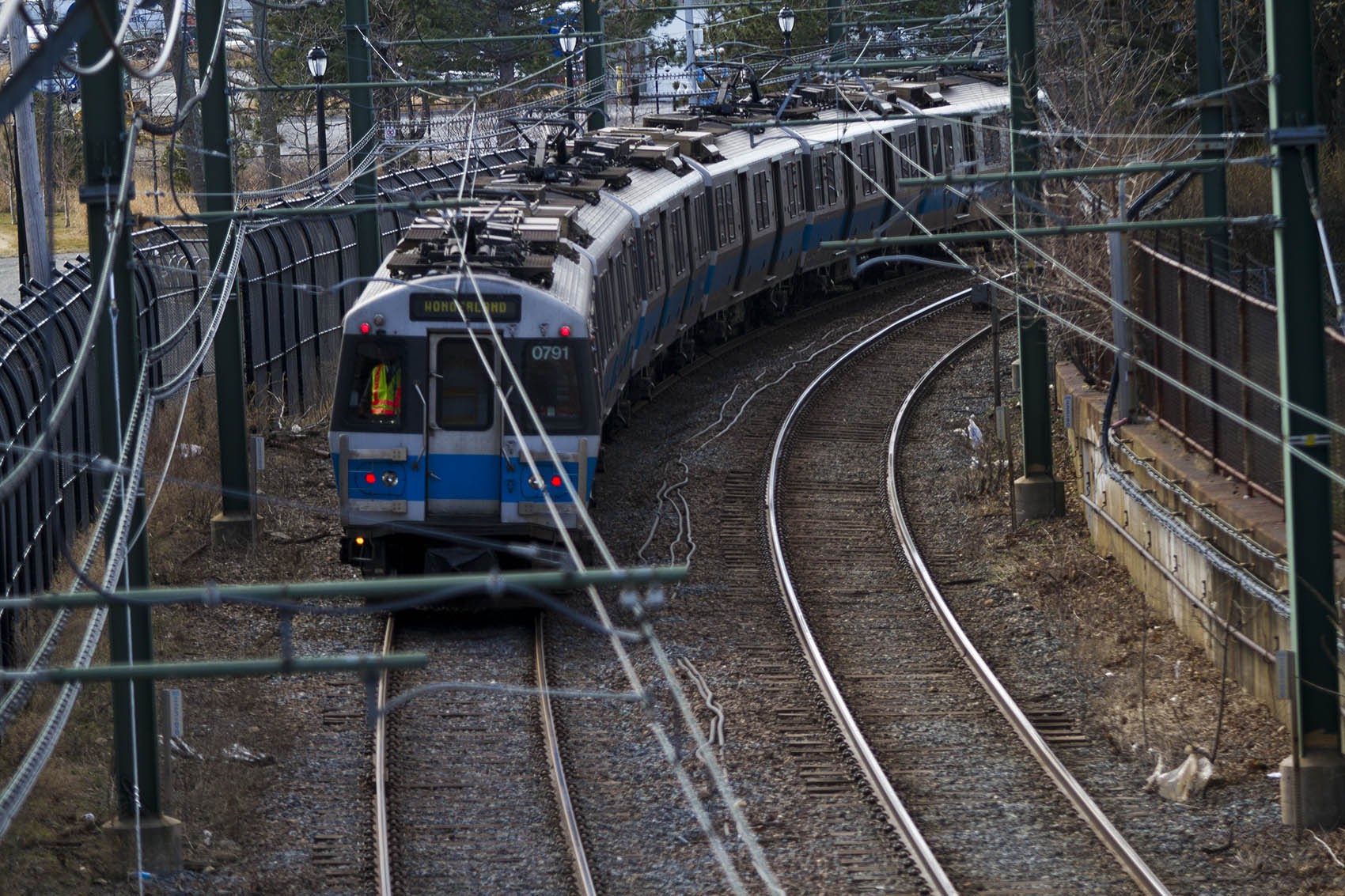 Shall controlled transportation now be the criterion for “housing” ? If policy makers get their way, yup! (Here, An outbound MBTA train oln the beloved Blue Line cranks its way to Orient Heights Station in East Boston. (Jesse Costa/WBUR)

It is evidently not bad enough that our policy makers have imposed junk “units” on communities that used to work as such but are rapidly being remade into glorified college dorms. Now these same policy makers want to impose “transit’ on us — to link the construction of crap-itecture boxes to renovation and expansion of the horror we call “public transportation.” What could possibly go wrong ?

We are toild, by these highly-paid experts, that the future of our economy requiires that people live in “transit-oriented” housing — by which I suppose they mean, housing that is walkably close to a bus stop or subway station. When one asks, as I now do, why living close to a bus stop is vital to economic growth, they have no good answer. Instead, they tell me that the more people who live close to a bus stop, say, the fewer will need cars and thus the less impact upon our climate, which, say the policy makers, is nearing irreversible doom state.

Obviously a doom climate would be hella bad for our economy. Thus, say the experts, we must subject both housing and personal mobility to a third criterion. I’m not au fait with this, and I doubt that you are happy with it either. As for climate,. planting millions of trees — as smart metropolises are now doing — will do more for climate health than any mobility control. The same is true of electric vehicles, which will be enormously enabled by the electric charging stations being funded by the infrastructure bill soon to pass Congress.

So much for requiring more public transportation and housing tied to its presence.

To continue : why do we need “transit oriented housing’ when, as a result of Covid, many people will continue to work from home ? The old regime of commuting from home to the office or factory is not coming back. Moreover, people working from home don’t need to live in an overly dense, sardine-like city. They can live in the suburbs, or the exurbs, or even farther away and do just fine. As for those who cannot work from home — maintenance people, grocery workers, health care people and such like — their housing need is for apartments or owned homes that they can afford, which is none at all of what is being built now or contemplated as “transit oriented.” Need I tell you AGAIN that what is being built in Boston today is enormously expensive and likely to become more so ? Because it is not service workers, etc., who move into it, because the costs are way, way beyond what such workers earn.

The “units” now being built are priced for the well-paid or for the city’s thousands of college students (often these “units’ are advertised as such !); but even if these crap boxes were priced to working-class incomes, they would be unacceptable because of the utter lack of community therein. East Boston’s housing stock was built as singles, two-families, and threes, a mall-scale architecture which enabled humble community. You knew your neighbors. Doors were not locked, no one was shut out by security systems, you were not parceled out one by one along lengthy corridors as in a hotel or an army barracks. Said housing was also dirt cheap, because land acquisition costs were cheap, and consttruction — even with high quality woods and crafted woodwork — wasn’t expensive either. More significant, almost all potential buyers lor renters were very low income. You either made your construction cheap enough, or you didn’t build at all.

Many workers in today’s Boston are just as poorly paid, relative to the entire eceonomy, as were the residenbtrs of 1900, but construction today faces so many costly and bureaucratic obstacles that its price points have to be high, and why not, when there exists a vast market for very expensive housing that a developer would be a fool not to build for ? Nor does this very well-paid horde of buiyers or renters have much time for community. If you work 70 hours a week drafting legal briefs or managing hedge funds, you’re sort of unlikely to be kayaking, hiking, or attending a little legaue football game. Not to mention that you probably don’t have kids or are even married. The market which builders aspire to is a young singles market — which is also why bistros like The Quiet Few, Cunard, and the Reel House prosper where family restaurants often don’t.

So much for community. Welcome to dormitory city.

As for the wage earners who supposedly “transit oriented” housing is to serve, all they see right now is that ( 1 ) “transit oriented” means “priced way above me” (and affordability regulations don’t help), and ( 2 ) such affordable housing as does exist is rapidly being bought by devlopers and either demolished to make room for $ 3200 – $ 3800 a month customers or being sold for $ 1,350,000 — to condo converters, because what ordinary working family can afford such a price ?

That any such housing requires an expansion of public transportation is a sick joke. Firstly, many of the buttered young folks moving into $ 600,000 condos or $ 3200 apartments move by bicycle; and our public policy folks have decided that bicycles have a right to the roads thnat were built for cars and paid for by car owners. Second, public transportation is a means of social control. Do we really want more of that ? My grandparents — and yours — came here for liberty; control, they had plenty of back in Europe. Third, the workers whose incomes make it hard for them to own and register a car — given the plethora of fees, fines, taxes, and closts imposed on car owners by our laws — can’t afford much l;onger to live in a $ 3800 a month City. So who, exactly, is this proposed expansion of control transportation going to serve ?

As always, those who do not have much money get nothing but sympathy, plans, and promises when what\’s needed is the basics of life that you or I have grown up assuming would always be there.