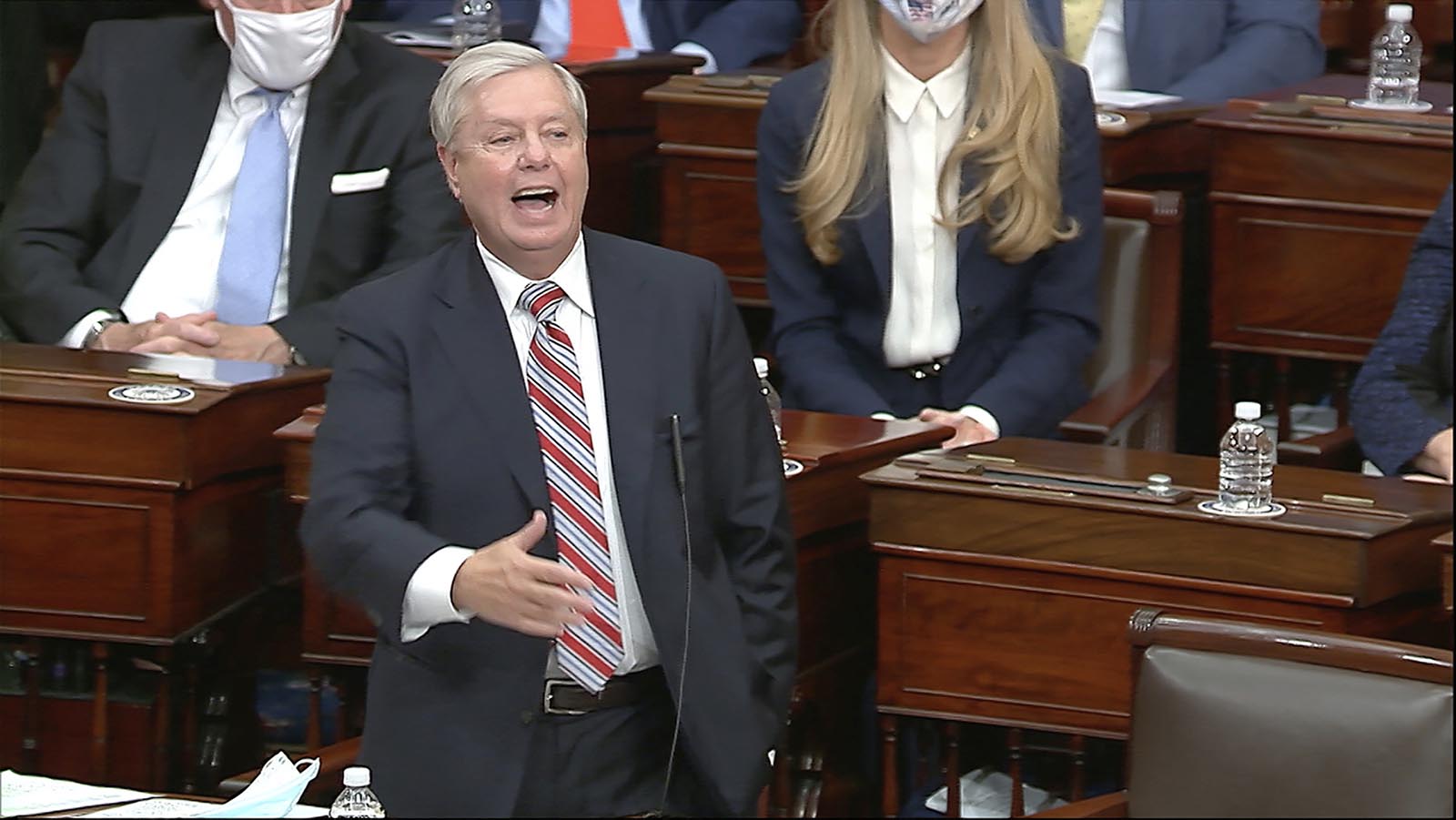 In this image from video, Sen. Lindsey Graham, R-S.C., says “Count Me Out !”  as the Senate reconvened to debate the objection to confirm the Electoral College Vote from Arizona, after protesters stormed into the U.S. Capitol on Wednesday, Jan. 6, 2021.

All during yesterday’s mob attack upon the nation’s Capitol, I read comments on social media about those Republicans — and it was Republicans they were judging — who finally turned against Mr. Trump[ and refused his overturn-the-election gambits. “too little, too late” said many. “Oh but you had the chance last year to impeach him,” said others, “so no points,”: Yet others wrote “you’re no hero” about the many Senators and a fair number of House Republicans who rejected Mr. Trump’s coup shots.

It is oh so easy to be judgmental when you’re ass is not in line to become grass.

Think of Senator Lindsey Graham, of South Carolina, who from 2018 to just a few weeks ago became the bete noire of Trump haters. Having to face re-election in a Trump State, with Trump; enjoying 85 to 90 percent support among his State’s Republicans, what realistic choice did Graham, have but either to not seek re-election or to use Trump for all it was worth ? Avoiding being “primaried” and thus being easily re-elected and therefore on hand, as he was yesterday, to shut the door upon Trump-supporting dead-enders in a Senate that had decided to isolate them, as it did, with Graham’s merciless support. More about Graham later.

Perhaps no Republican in Congress was more often spat upon than Senator McConnell: yet McConnell’s announcement, on December 14th, that the votes had all been State-certified and Joe Biden was the winner, that drew the line between what is right and what was seditious; drew the line and drew it irrevocably. After McConnell made that declaration, on the floor of the Senate, and carried with him almost all Senators, the game was up for Mr. Trump. No longer could he with impunity cow or bully the Republican legislators. Now there was an equally powerful option, perhaps a more powerful one. And Mr. Trump knew what had happened. He immediately spat upon McConnell — and on McConnell’s second in command, John Thune of South Dakota — but his spit had no force : McConnell had just been re-elected for six years, well beyond the reach of any threat to “primary him,” while Trump himself was a month from gone.

McConnell made it very clear that day, and every day thereafter, that he was going to follow the Constitution to the letter and that nothing Trump might say or do could move him.It worked, because McConnell knew that almost all Republican Senators supported his stance; and as the President has no Constitutional power over a Senator, or all of them,. McConnell knew that he had — finally — broken with Mr. Trump at the right time: the time when he could break and keep his caucus support. Almost everything that was done yesterday by the Congress was successfully done because McConnell now held the power, just as our Constitution devised: the Congress is our primary branch of government. It is established by Article One, after all, the Presidency only in Article 2. Nor was there a Congressional escape route for Trump, as the House is controlled by the opposing party.

McConnell had waited until he had an unshakable case to make : the Constitution and the will of the people. Some have asked, “why didn’t he vote to convict Trump at the impeachment trial back in January ? Certainly he knew — they all knew — what Trump was, just as Adam Schiff, the lead impeachment manger, passionately spoke. So why did conviction not happen then ? I think we know the answer : back in January, Mr. Trump’s utter disregard had not been shown in full cry; it was known to political people — who understood the import of Trump’s infamous phone call to Ukraine’s President, in which Trump extorted him to “do us a favor though” in exchange for badly needed weapons to fight Russian aggression — but not to ordinary people, who don’t breathe or drink politics every minute; and that Trump received some 74,000,000 votes on November 3rd emphasizes the point. But if most voters did not grasp the impeachability of that phone call, every voter knows what an election is and what it means, because everyone values his own vote and will NOT have it denied. And when Trump made it clear that would move heaven and earth to overturn the election results, no matter what or how, this the average voter fully understood. Many Republic an voters believed Trump’s lies about election fraud, but some did not; and upon that opt-out group of Republicans, about 40 percent in number, McConnell took his stand. And his gambit succeeded. Elections were over, nobody could be “primaried.” Thus his move did NOT come too late. It came at exactly the right time.

As McConnell, so the many other Republicans who took his cue, or even preceded it, as did Mitt Romney and Senator Ben Sasse (Nebraska). In the House, Adam Kinzinger stepped up — full tilt and every day. His twitter posts drew tons of comments “where were you back in January ? you voted against impeachment.” Yet why vote for impeachment if you know that the impeached cannot be convicted because the votes are not there ? When the political and Constitutional grounds shifted, however, Kinzinger stepped up. And several Hose Republicans joined him. too late ? i say no. I say they stepped up at the right time, when their objections to trump COULD WIN; could have an effect rather than merely making a point and losing.

I do not mean to suggest that I applaud such artistry and calculation; much about politics is craft, very little of it is heroic. Yet I am grateful for craft exercised in the service of our Constitution’s ideals, and I am always mindful that in politics, when the chips are really, really down, you HSVER to win, there are no second chances at such junctures, and if a Congressman or a Senator waited until the moment when his or her craft could nail it — as masterfully as Tom Cotton of Arkansas nailed it three days ago, mortally after Senator Hawley of Missouri made his fatal mistake, and as Lindsey Graham, of South Carolina nailed it yesterday — then I am glad, very glad, for crafty nailings.