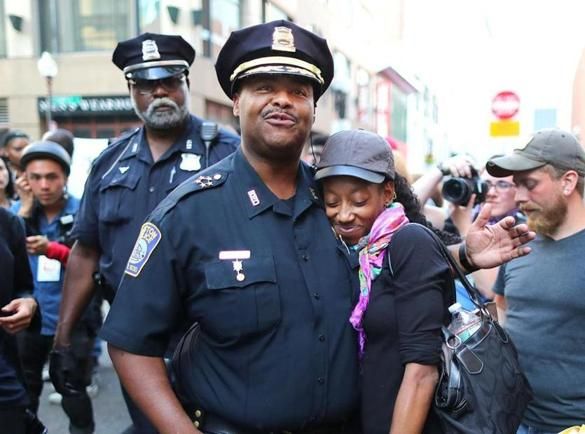 UPDATE 06/14/20 : we have added two sections, on police issues that we neglected to discuss in our original post.

Here and Sphere’s opinion about police reform has been  asked by many of you. Clearly there has been much conversation of this subject. It is timely, therefore, that we offer our stance on what to do or what not to do. As follows :

( 1 ) “defund the police” has been much talked of. By “defund” is usually meant reallocating portions of police budgets to hiring and training social workers who would be called upon, rather than actual police, to handle low-priority criminal situations. We are opposed. If social workers are to be hired, let them be hired within police departments and operated under police direction. We cannot have two agencies, police and social workers, rivaling each other when dealing with a criminal matter., Such competition would quickly lead to jurisdictional disputes and second-guessing on actions taken. Better to have one agency, the police department, oversee all degrees of response. Thus we support increasing police department budgets , if feasible within taxpayers’ approval. to provide the hiring of social workers.

( 2 ) methods of enforcement have been criticized as excessive force. Reformers make a strong case here. Just as we regulate the rules of engagement of soldiers in combat — Geneva Convention and prohibitions of torture — I think we have full authority to regulate patrol police conduct. Choke-holds, knees to the neck, carotid artery constriction — all are solid examples of patrol conduct that should be banned in the ordinary course. In the case of resisting arrest, more flexibility may be permitted, but regulations should err on the side of restraint.

As for shooting, Boston’s police have a rule : “just because you CAN shoot doesn’t mean that you SHOULD.” De-escalation of situations is the Boston police view. We endorse that view.

( 3 ) administrative review of alleged police misconduct : We do not favor civilian review boards and such like. Police are employees of an employing organization. in every employed organization, there is an employees’ handbook, and where discipline is called for, it is reviewed and decided by that organization’s supervisors. Employees must be able to trust the discipline process. How can police employees trust a review board made up of people answerable to persons calling for extreme measures and unwilling to hear exculpatory evidence that might undercut the “get him !” narrative ? Police employees have just as much right to not be tried by the media or by politicians as any other organization’s employees. Of course I speak of the ordinary course. Where review of a misconduct matter shows an actually criminal event, it becomes a District Attorney matter out of the hands of the Department.

( 4 ) body cameras and duty to intervene : some reformers are asking that where a police patrol is of two or more patrolers, each has a duty to intervene if he or she sees a patrol; ember violate the rules of engagement or enforcement. Given the fast-moving pace of most police patrol encounters, it is unrealistic to require any such action. We would, however, favor a police rule recommending — but not requiring — such intervention where feasible. As for body cameras, it is wholly understandable why police might object. The very notion is a statement that “we don’t trust you.” No employee of any organization should ever be signaled that his or her supervisors — much less the public — don’t trust them. If we don’t trust a police person, he or she should not be hired in the first place. We therefore do not like the idea of body cameras and would support them only if the police force itself votes to have them.

( 5 ) standards for police certification : Governor Baker is said to be submitting legislation that would require state certification of persons applying to be police. We like this proposal. If you seek to be a Doctor or a Lawyer, you have to pass a difficult exam and be found of good moral character. I see no good argument why applicants for police employment should not also be examined for character. The public must feel that it can trust the wisdom and training of police persons, who have authority to interrupt our lives and even arrest and charge us.

( 6 ) “diversity” : we do not agree that a police force should “look like the community.”  Policing is not a matter of how one looks but of how one ACTS. That said, police departments should make every effort to hire from every neighborhood in the jurisdiction, and elected officials should require it : because every neighborhood is to be policed, and neighbors must feel that those who are policing them respect the neighborhood and all who reside in it.

( 7 ) police as union members : some reformers want police unions tossed out of unionist organizations. Others also want police unions de-certified or removed from disciplinary procedure. We strongly oppose these proposals. Why should police employees not have as much right to unionize as any other employees ? You’re either a unionist, or you aren’t. In many discipline situations — such as are now being bayed for all over the nation — the only defenders that accused police have is their union leadership. That is exactly what union leadership is there for : to bargain on behalf of members and to defend them when accused of an infraction. This is how due process works; fairness. We support police unions.

( 8 ) police details and flag duty : reformers have for decades been calling for an end to police detailing at road work sites . We support this reform. Many states do without road work police details. The police argument is that their presence is a safety measure; yet flagmen seem to do a pretty good job of keeping road work crews safe.

( 9 ) equipment and armaments : some reformers have called for police forces to not have military-grade arsenals. We feel that that decision should be up to the individual police department. Our principle here is that police should have all the tools that they feel they need, that they should always be able to out-gun criminals, if needed, and that potential criminals should know that they are out-gunned.

Given the level of rioting that we have seen, if police don’t have sufficient tools, cities will have no choice but to call the National guard and even the US military. No one wants that.

( 10 ) qualified immunity : first of all, what is it ? Cornell Law School says “a type of legal immunity. …(which) protects a government official from lawsuits alleging that the official violated a plaintiff’s rights, only allowing suits where officials violated a “clearly established” statutory or constitutional right.”

Police officers know, having this immunity, that they will not be answerable personally for violations of frights, only for violations of specifically established legal or Constitutional acts done in their official capacity and answerable under Title 38 of the Federal code (violation of civil rights laws). Our view is that, one, most of the cases that might require a qualified immunity defense can be avoided by proper training of police applicants and of those already on force and ( 2 ) no police person should feel him or herself restrained, by lack of legal support, from taking such actions she or she deems necessary on the spot to protect him or herself or the public. Anyone who has watched as many riot videos as I have must marvel at the restraint shown by police in terrifying situations, under attack by mobs. It’s a wonder they don’t fight back more forcefully than they do.

Where police respond excessively, as appears to have happened to Martin Gugino in Buffalo, department discipline is available and should be carried out. There can never be any excuse for a police department to smother an investigation of excess.

Thus we oppose ending the doctrine of qualified immunity.

Police on patrol risk their lives at every encounter; as they will tell you, police have been shot and killed even at routine traffic stops. Those who undertake to be police persons should — must — know that until the day they retire they will be placed under pressure, maybe into combat, and always second guessed and needing to embrace relationships of friend with the entire community. To that end, we fully endorse police-community organizations, ombudsmen, and police attendance at neighborhood meetings. We are glad to see police departments as well led and represented a Boston’s by Commissioner William G. Gross ( and by Bill Evans before him). This is a difficult moment for police, on account of a shocking event that displays the worst of un-self-disciplined action by a poorly certified policeman (and his crew). Our response to that act, however, must never be to bloody the reputations and courage of all wearers of the blue. Just the opposite. Let this be a moment for spotlighting the dutiful work performed every day by police persons throughout the nation.