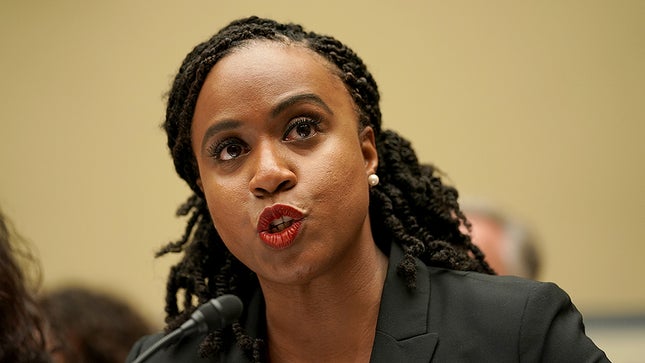 ^ Ayanna presents House 702, a resolution that has a lot in it to like. And a lot more that makes me go “whaaa ?”

It took me  a full 15 minutes to read the extensive text — 31 pages — of Congresswoman Pressley’s Criminal Justice reform bill, docketed as House Resolution 702. You are now invited to read it just as I did : https://www.congress.gov/116/bills/hres702/BILLS-116hres702ih.pdf.

There’s a lot to like in House 702. There is also a lot that has nothing immediately to do with criminal justice but which seeks, basically, to create an entirely new society than the one we have. Pressley’s press release says that her bill is similar to the infamous “Green New Deal.” She’s right. Her bill is not just a reform but a revolution. You may applaud that; I prefer a more modest tomorrow.

That said, there is indeed a lot to like in House 702. It seeks to reduce incarceration by a lot. This should be everyone’s goal. Why are over 2,000,000 Americans in custody ? Most, as Pressley says, are behind bars because of addictions or because they can’t pay fines, fees, and other costs imposed by criminal courts. Pressley would like to see cash bail eliminated for those who can’t pay or can barely afford it. I support that. People in that degree of poverty aren’t flight risks. If they can’t afford bail, how can they afford travel ? Pressley also wants to see addiction dealt with by treatment, not incarceration. This is hardly a radical proposal. Many states, including our own, have already adopted this procedure. House 702 would apply it to Federal criminal practice.

House 702 also seeks reforms to rules for visiting those who are incarcerated. It would make visits more congenial, especially by family members. Natural light and air would be environed. Phone calls by inmates to family would be free. Similarly, House 702 calls for nutrition standards for foods served to inmates and provides that no item that an inmate purchases at a prison canteen may cost more than in an ordinary store. Next, House 702 directs that prisoners who are required to work must be paid no less than the Federal minimum wage. Lastly, House 702 requires that prison habitation conditions be livable. Prisoners should never be forced to live in filth, 24 hour noise, constant harsh lights, and inadequate bedding and toilet accommodations. Imprisonment is savage enough as is without having conditions that violate of the Eighth Amendment added to it.  All of these provisions are common sense fairness. As House 702 says, most prisoners will return to society, and the goal should be to make their transition from prison to society less difficult than it will be no matter what.

Pressley’s bill also seeks an end to private prisons and to any profit opportunity appurtenant to  imprisonment. I agree. The prison establishment, just for existing, has created a vast vested interest, resistant to reform. The last thing we need is to add a profit incentive to it. Profit should have no place in the criminal justice system, which is about public safety, not moneymaking.

More controversial, but not out of bounds, are House 702’s reforms to sentencing and its consequences. Pressley seeks an end to solitary confinement. She asserts that there are currently 61,000 prisoners living in solitary. Sole confinement is either a disciplinary measure or a protective. For the protected, it’s hard to envision an incarceration that isn’t solitary. As for disciplinary solitary, it too lacks an alternative. A prisoner whose behavior is so dangerous as to threaten other prisoners can’t be let into general population. Yet as Pressley notes, solitary is terrible mentally. Extended solitary can lead to insanity, even suicide. Prison sentences should not be burdened by punishments not included therein, and certainly insanity and suicide violate the Eighth Amendment. Some will say that prison should not be  a vacation and that its harshness is part of “hard time.” well, sure. But is not loss of freedom and constantly being guarded plenty hard enough ? Again I say : most prisoners will return to society. It hardly helps anyone if they return aggrieved, embittered, violated, mentally broken.

House 702 also tries, laudably, to address the matter of 911 calls. As we have seen,. almost every tragic shooting of unarmed people — most of them people of color — began with a 911 call that almost certainly should not have been a 911 call. Pressley’s bill includes the following clause : testing, implementing, and evaluating methods of processing 911 calls that reduce unnecessary contact between law enforcement and community members…

All of these provisions, I can support, and do. They’re being adopted in many States. Why not Federally ?

If House 702 stopped there, it would merit a committee hearing and a vote by the full House, and a favorable outcome likely. But House 702 does not stop there.

The resolution seeks several end of sentence reforms. It would allow most prisoners over age 55 to seek release and those over 60 to have it. It ends sentences of life without the possibility of parole. I doubt that many of us support that. Yes, the costs of maintaining an elderly prisoner are high, even higher once they reach infirmity or terminal illness. But we already have compassionate release provisions that allow for mercy to such prisoners. I don’t see a pressing need for further reform here, certainly not as part of a bill which offers much that most legislators will support.

Still,  one can argue the justice of sentencing clemency. I find the remaining provisions of House 702 mistaken or just plain pie in the sky. It seeks an end to prosecution of “minor” shoplifting. I doubt that merchants whose goods are lifted will like that. Shoplifting increases a merchant’s insurance costs, which she must then pass on to her customers in price increases. Why should we, the public, pay to subsidize shoplifters ? Worse yet, businesses have been known to close down entirely because their theft insurance costs can’t be borne. I don’t think communities are made more desirable by having their major retailers close down. Springfield, for example, is decrying the closing down of a low income neighborhood’s last full service bank. Food retailers have already left. Is this good for that neighborhood ? I don’t know anyone who thinks so.

House 702 also seeks to decriminalize “sex work,” i.e. prostitution. Look — of course the actual sex isn’t the thing, it’s what accompanies so much “sex work” : pimping, sex trafficking, robbery, drugs, and “rolling.” Perhaps in Europe, where “sex workers” are regulated by government as if they were liquor stores, non-criminal “sex work” can be conducted safely without bad stuff (though I doubt it). Here, in America, where such regulation has no political support at all, “sex work” can only be regulated under a criminal law rubric.

There’s more to House 702 as it spins into all kinds of other wish lists : a $ 15/hour minimum wage, immigration reform, family structure integration, a Secure Communities Act, banning the militarization of local police, community review boards for police, limitation of prosecution to crimes of violence and “sexual assault” (which as we see today can be almost anything), a Federal job for everybody, an end to prosecutorial immunity, and much more, all of it more germane to separate legislation for many House committees to think about, and much of it politically impossible, some of it unwise, prejudicial, or much too blanketing.

My headline says ‘a lot to like,” and there IS a lot to like in House 702. Let us hope that a House committee can cut away the merengue and focus on the pie, many slices of which are worth a law enactment lunch.